You are here: Home / Featured / Welsh supercar to take on world’s best 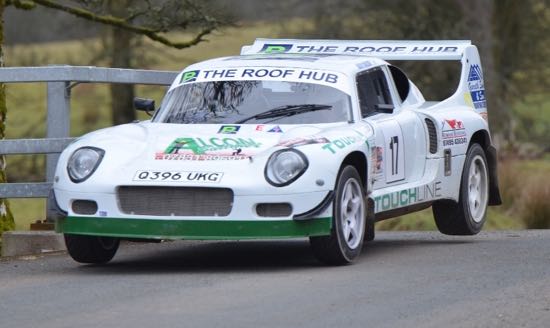 Each is intent, and capable, of giving the top World Rally Cars a run for their money and challenging for the overall title.

The mid-engined cars, built in west Wales by Tim Duffee, are synonymous with asphalt rallying and have twice beaten four-wheel drive cars to the MSA Asphalt Rally Championship title – with Geoff Kitney/Alan McCann champions in 1990 and John Dalton/Alun Davies in 1993.

Ashley Field will return to competition for the first time in 17 months when he contests the series in his Millington-engined Darrian T90 GTR+. The rapid Mansfield driver’s last event was the 2016 Dukeries Rally at Donington Park – an event he won by over two minutes, having set fastest time on every stage. Last year he didn’t rally at all – instead training for, and riding on, the Etape du Tour, which takes in many of the classic mountain stages of the Tour de France. He also helped his son Fred contest the ADAC Opel Rallye Cup in Germany. This year Field is returning to contest a full Protyre MSA Asphalt Rally Championship and aiming for overall rally wins and title success in his self-prepared, Medi Cell Rally Team-run, latest-spec Darrian T90 GTR+ – which has support from Chevron Lubricants and Techron fuel system cleaners.

Field said: “I’d like to think we could challenge for the title, although there are a lot of very good competitors in this year’s Protyre MSA Asphalt Rally Championship. With a two-wheel drive car, a lot depends on the weather and road conditions, so whilst we don’t know if winning the title is achievable, we’ll certainly be giving it a good go. The Championship is full of great closed road events which we enjoy doing, and taking the Darrian to Belgium will be great – in fact, we’ve already entered Rally van Wervik, because I hear that event fills up very fast. None of the Asphalt Championship events clash with the ADAC Opel Rallye Cup, which my son Fred is doing again this year, so we’re looking forward to a busy season, and my first full season behind the wheel since 2016.”

Andy Fraser has entered the Protyre MSA Asphalt Rally Championship in his mighty Nissan 3-litre V6-engined Darrian T9. He hasn’t rallied since the 2016 Harry Flatters, so the Coalville-based driver will shake the Promotive Engineering-backed car down on a signal venue rally at Donington Park the weekend before the Tour of Epynt. He’ll be co-driven by Peredur Wyn Davies.

Fraser said, “We’re aiming to be the top placed two-wheel drive car in the Championship, and hope to get as many World Rally Car scalps as we can along the way. Our last event was the Harry Flatters eighteen months ago, and we were battling for victory right up until a fire just before the final road section, so we know we can be right up there on the pace. The car, which we run ourselves, has had a number of upgrades, and we have a few test days planned between now and the Tour of Epynt to make sure we’re well prepared for the opening round.”

Tony Rees will drive a brand new Darrian GTR, powered by a Millington Series 2+ engine. The Pontyclun-based driver has been rallying for almost 40 years, and is well known for giant-killing performances in Avengers and Sunbeams – and won the two-litre class on last year’s Harry Flatters Rally in his Sunbeam. He has also rallied a Darrian before, and was lying fourth on the 2015 Mewla Rally in an ex-John Dalton car. He’ll be co-driven by Geraint Thomas.

Rees said, “I’ve always contested selected rallies and never committed to a full championship before, so the plan is to start the Protyre MSA Asphalt Rally Championship and see how it goes. The Darrian GTR is a brand new car and we’ve only driven it twice before – at Rallyday at Castle Combe and at an event at Bovington, both towards the end of last year – so the Tour of Epynt will be my first serious rally in the car. The Championship has attracted a lot of good entries and there is a good calendar of events. I’ve never done the Manx before, although it’s always been on my bucket list of events to do, and I really enjoy rallying in Ireland, and I’m looking forward to some dry weather and a good Championship start on the Tour of Epynt.”

To celebrate his 30th year in rallying, Huw Reed will contest the Protyre MSA Asphalt Rally Championship in his 2.5-litre Millington Series 2-engined, ex-John Dalton/Damian Cole, Darrian T90 GTR. The Bridgend driver has a huge amount of experience, having previously rallied everything from a Lada, to an Escort Cosworth and a historic Peugeot 205. He has a vast amount of experience in Belgium, and was the first to compete in a Darrian on a non-rallysprint event in the country – although Rally van Wervik is ironically the one event he hasn’t done. Reed will be co-driven by Anthony Hackett and supported by Raintite and Hot Wheels.

Reed said, “We’re not ruling out doing all six rounds of the Protyre MSA Asphalt Rally Championship, and we’ll certainly do the Tour of Epynt, Manx, Rally van Wervik and the Mewla. The car’s won many times on Epynt, so if we get a good start there, and follow it up with good results on the Isle of Man and in Belgium, we’ll have to dig deep and find a way to carry on! I’m really pleased that the series is going to Belgium. I’ve done the two-day Flanders International Rally six or seven times and also the Flanders International Rally Challenge, with the exception of Rally van Wervik, which I’m obviously looking forward to contesting for the first time this year. I bought the Darrian T90 GTR in 2016, so this will be my second full season in the car. We’ve upgraded it from a Millington Series 1 to a Series 2 engine and put in a paddle-shift sequential gearbox, and on its day it’s a great car. We finished third on the Tour of Epynt last year – this year there is a very strong entry, so we’ll be aiming for a strong top ten finish to start the season well.”

Paul Culverwell will drive a ‘clubman’s’ Darrian T9, powered by a Honda S2000 engine and equipped with a Hewland six-speed paddle-shift sequential-shift gearbox. The Staffordshire-based driver has a lot of rallying experience, having started his rally career in the 1980s and rallied a Sunbeam, Toyota Corolla and, for 10 years, a rear-wheel driver Peugeot 205. And one thing’s for sure – you won’t be able to miss Culverwell’s bright orange, Fuchs Lubricants-backed, Darrian on the stages! He’ll be co-driven by Sophie Buckland.

Culverwell added, “The Darrian T9 is a relatively new car for me. We’ve only done six rallies in the car – we’ve had some good results and one big accident on last year’s Mini Epynt, which put us out for five months, but now we’re back. This year’s Protyre MSA Asphalt Rally Championship is just the incentive I need to do bigger events, and we plan to do every round of the series. I’m really looking forward to going to Belgium and returning to the Isle of Man and doing events that are a little outside our comfort zone. It’s a clubman’s spec Darrian with a near standard engine, but it’s a good car and we’ll certainly be giving it everything we’ve got to achieve some good results.”

Double Welsh Tarmac Champion Richard Merriman is entering the Protyre MSA Asphalt Rally Championship in his 1998cc Vauxhall-engined Darrian T90, which is supported by The Roof Hub, Touchline and Gareth Swan Roofing. The Pontypridd driver has a long association with Darrians, having rallied one since 1992. Co-driven by Kath Curzon, Merriman has won his class on Epynt many times, and won the 2012 Mini Epynt outright.

Merriman went on, “We’ve had quite a lot of success on Epynt, with many class wins and top ten finishes. It’s one of my favourite places to rally, so I’m especially looking forward to starting the season on the Tour of Epynt. We’ve always entered the Asphalt Rally Championship, and this year is no exception – and we’re going to take it one event at a time and see how it goes.”