You are here: Home / 2019 Motorsport / Welsh rivals battle for UK honours in Scotland

Two Welshmen will this week fight it out to decide the British Rally Championship, in Scotland.

After five pulsating rounds, the British Rally Championship will be decided on the final event of the season — the Armstrong Galloway Hills Rally in southern Scotland this saturday.

Two drivers have a mathematical chance of clinching Britain’s premier rallying title, and all that stands between the two protagonists are nine stages, equating to 75 gravel miles through the picturesque Galloway forests.

In one corner, defending champion Matt Edwards of Conwy and in the other, young-charger Tom Cave, from Aberdyfi. Edwards has had a near perfect start to his title defence, with only a retirement on the Pirelli Rally the only blot on his copy book. The M-Sport star has raised his game again in 2019 and comes to Scotland with Cambrian, Ypres and Ulster Rally wins and an impressive 93-point haul.

The Pirelli-backed Ford Fiesta R5 driver has already helped co-driver Patrick Walsh to his title, and now the Welshman enters his third Showdown in a row.

Edwards will need to take a cautious approach – as a seventh or better will seal a second straight BRC title, a feat last achieved by Keith Cronin in 2010. Easier said than done in the challenging forestry tracks. 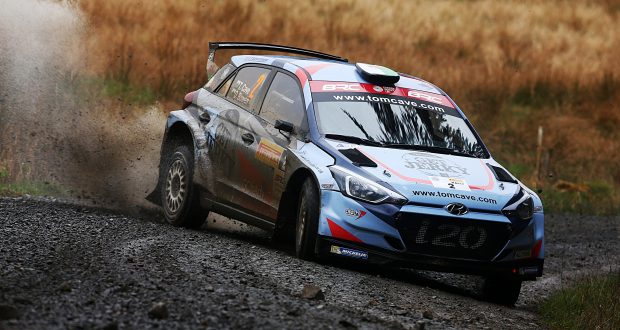 Sparring partner Cave has had a roller-coaster of a season in the BRC top-flight. A last stage triple puncture retirement on the Cambrian Rally failed to ignite the Welshman’s year. However, a fired-up Cave came out fighting in his Michelin-shod Hyundai i20 R5 with back-to-back BRC wins on the West Cork and Pirelli rallies and a second in Ypres – putting him equal on points with Edwards heading to the Ulster Rally.

Sadly, for Cave and navigator Dale Bowen, a rare error saw them crash out of the event in the closing stages of the event – leaving them with only option for the Scottish BRC round – to drive for the rally win.

With both drivers still to play their points paying Joker – 30 points are up for grabs, with one driver to become the 2019 British Champion.

“The feeling is really good coming into the final round and the whole team have really helped me get to this stage. We have done the ‘easy’ part, now we have to work hard to secure the championship.

“I will be driving in the middle of the road, I won’t be taking any risks or big cuts and the car will be filled with lots of spares to get me to the finish – I can’t take any risks.

“I don’t feel any more pressure than I did last year. It will be exciting for the everyone watching as I guarantee Tom and I will have different game plans. The stages are excellent, and it will be a great battle providing an exciting end to the championship for all involved.”

“We have to go for it and take the win. I know Matt will be taking it easy and won’t be fighting for every tenth as it’s his to lose, but it will be difficult for him to drive at 50-60% rather than fully focused 100%. The package I have around me is very good, the Hyundai worked well on the last gravel event on the Pirelli Rally and I have gone well on Scottish stages previously. You can say the championship is 50/50 but in reality it is less than that, but anything is possible, and I am up for the challenge and giving it my all.

“I did the event in 2009 but we only did one stage as the gearbox went. Scotland as a whole has some brilliant stages and are very fast but very technical. I have gone well in the past on the Scottish Rally which has similar stages in character so I am looking forward to getting back there and getting into the title fight.”