The Welsh are worriers behind the wheel.

There are now over 25.8m cars on the road in the UK today, that’s nearly one for every two people and the figure is increasing at a rate of around 600,000 every year.

Even given the vast number of vehicles on the road, you’ll rarely encounter someone who openly admits they’re a bad driver.

• The South East and London have a high opinion of their driving but are the most deluded of everyone… they are more likely to believe they are safe, but they are much more liable to be in a crash

• Whilst people in Northern Ireland have a higher likelihood of casualty, they are evidently very clear this is the case. They are quite aware they are not as safe drivers and the casualty statistics match.

• Move to Scotland, the North East or East Midlands – People from these areas are much less likely to have a casualty… and they know this – drivers in this region are sensible whose confidence is backed up by the low chance of an accident.

• People in Wales need to stop worrying so much… they don’t believe they are safe drivers, but have the 2nd lowest level of casualty in the UK and their awareness of driving laws is strong

• We don’t understand how safe our cars are… Less than 7% of UK drivers know their car’s EuroNCAP Safety, however drivers in Scotland once again showed their proficiency when it comes to vehicle safety, with 13% aware of their NCAP rating, almost double the national average. 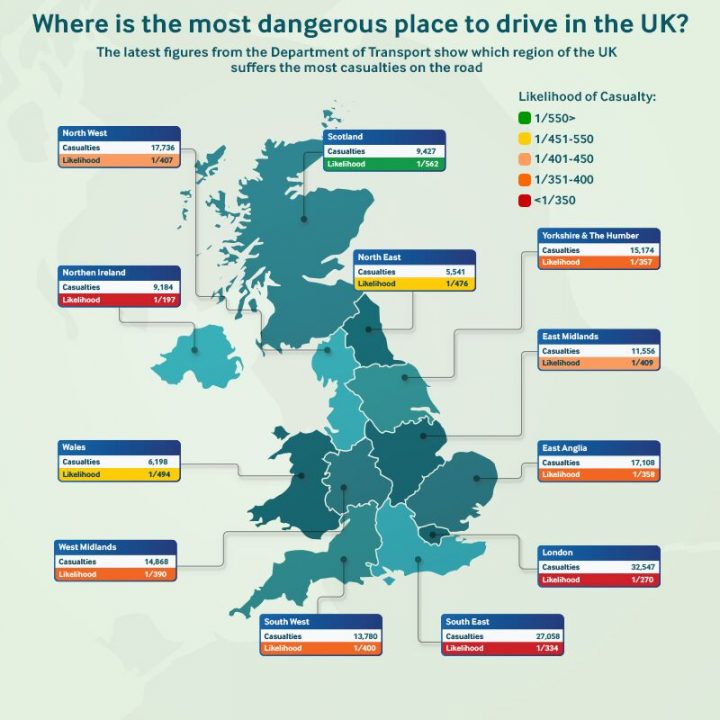