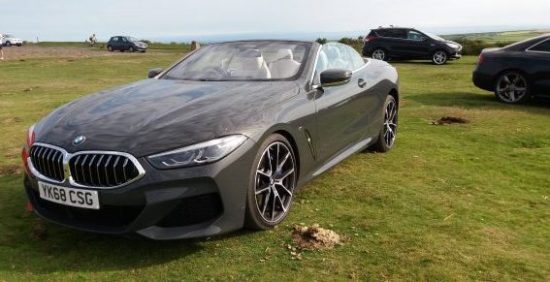 Refinement and rarity are the driving forces behind the new BMW 8 Series, and its halo has to be the convertible.

Relaunching its flagship series last year after nearly two decades out of the market it means the premium German brand is better placed to tackle its rivals and raise aspirations among owners.

Our 840d cabriolet had the slightly more torquey 700Nm tuned version of the 3.0d which comes with the soft-top and like all versions in the series it works in conjunction with a sequential eight-speed automatic/ manual transmission and safely putting power down with BMW’s own XDrive to four wheels. 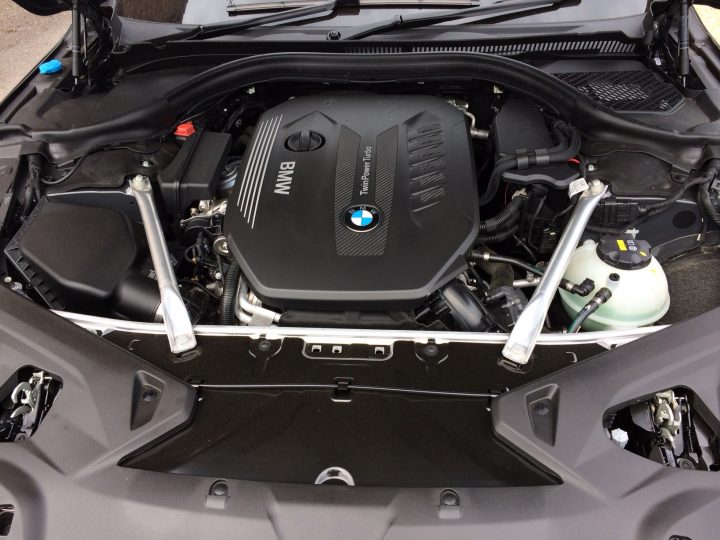 The powertrain is truly superb. You’d never know it was a diesel under that long bonnet, so instant, responsive, quiet and smooth a power delivery which puts many petrol units to shame, except for the fact it is also highly economical with almost 40mpg recorded on our test.

Silky gearchanges whether going up or down the box in automatic mode or subtle switches between manual selection really defy belief and the power keeps coming without much noise and certainly no vibration or harshness.

The refinement of the powertrain, the way it puts it all down through the big wheels and tyres, mean you have to keep a close eye on the speedometer as it rapidly reaches legal limits without any effort or much noise. It dismisses distance with distain and feels capable of popping across continental Europe in a day or so if you have a villa on the Mediterranean and want to arrive for dinner.

Not only is the engine and gearbox highly sophisticated but so are the steering and brakes. The massive discs really haul down speed with only very modest firm and increasing pressure on the pedal and certainly no sign of snatching, fade or vibration. Even the effective electric parking brake button is commendably progressive in application and that’s something I have not encountered before on such a button.

Turning the BMW 840d is satisfying with the well shaped and sized wheel giving great feedback; there’s a surprisingly good lock and as speed increases so does the feeling to the hands. The only feature I found disconcerting was the weighted response of the lane-aligning feature on the system and you have to make a determined effort to overcome when moving across a dual carriageway or motorway. 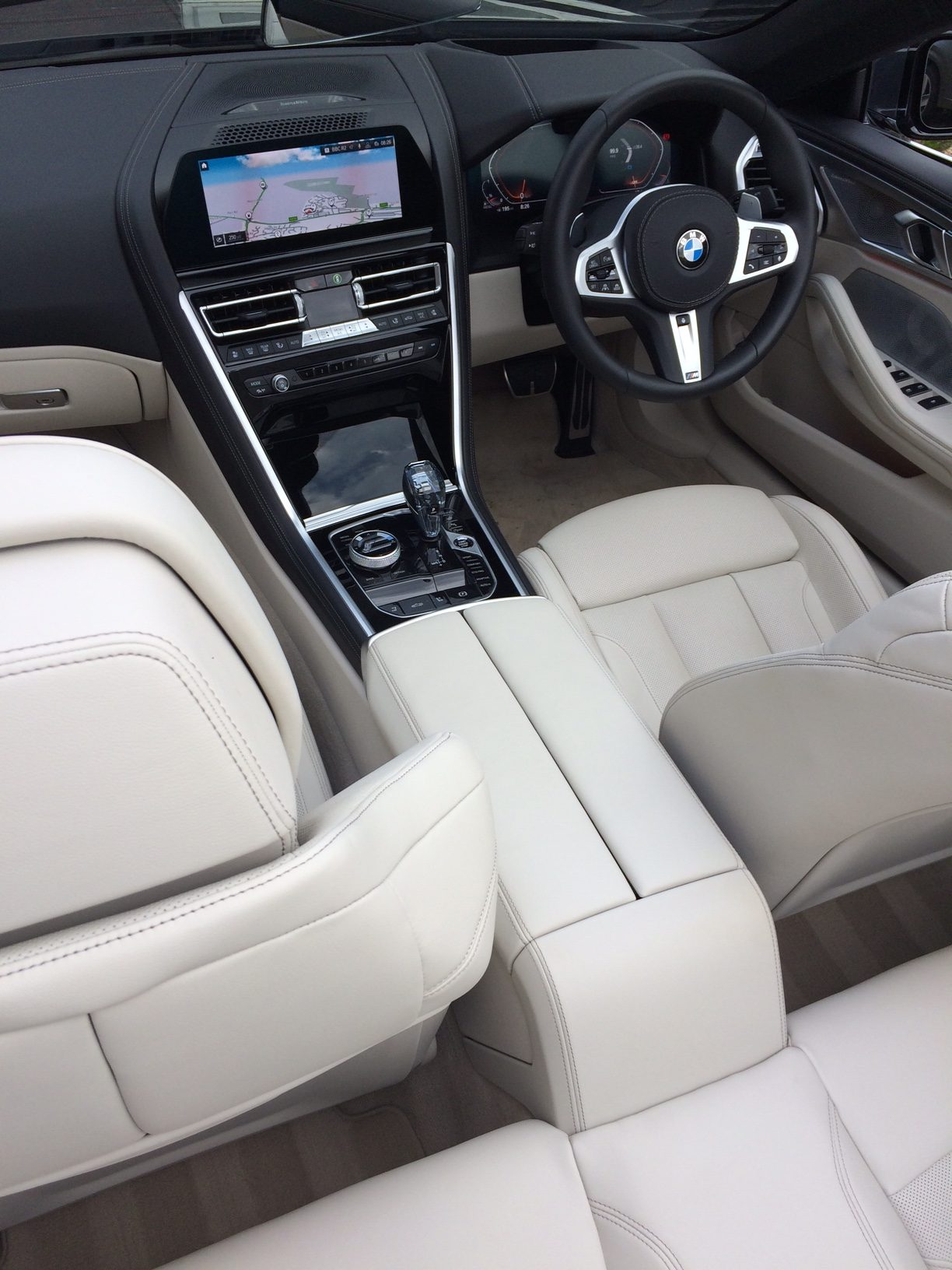 Main secondary controls are on the steering column stalks, wheelspokes or central console with some switches on the fascia and comfort controls are scattered about the centre of the fascia under the very large infotainment screen with its touch applications as well. It really is a lot to take in but they are brilliantly lit at night to ease selection. Familiarity breeds content.

Extras on the test car included a Bowers and Wilkins Diamond surround sound system; technology, visiibiliy and premium packs and an M series steering wheel and bodykit were no-cost options.

Any cabriolet poses a challenge in terms of heating and ventilation but the BMW 840d overcomes them all. The huge powered fabric roof folds and closes in seconds under a hard tonneau cover, its cosy and wind-tight and the system automatically opens or closes four side windows in the process.

The air conditioning and climate control is quick with a wide range of temperatures possible to achieve throughout the cabin and the front passengers can even have warming air ‘scarves’ to their necks.

Roof down the air turbulence was modest with the windows raised and even when these were dropped the incoming air was bearable around the front seats, slightly more troubling to anyone in the back.

With the roof lowered, visibility was excellent all round, with optional laser headlights seeing a long way up the road and rapid big-sweeping wipers keeping the glass clear. 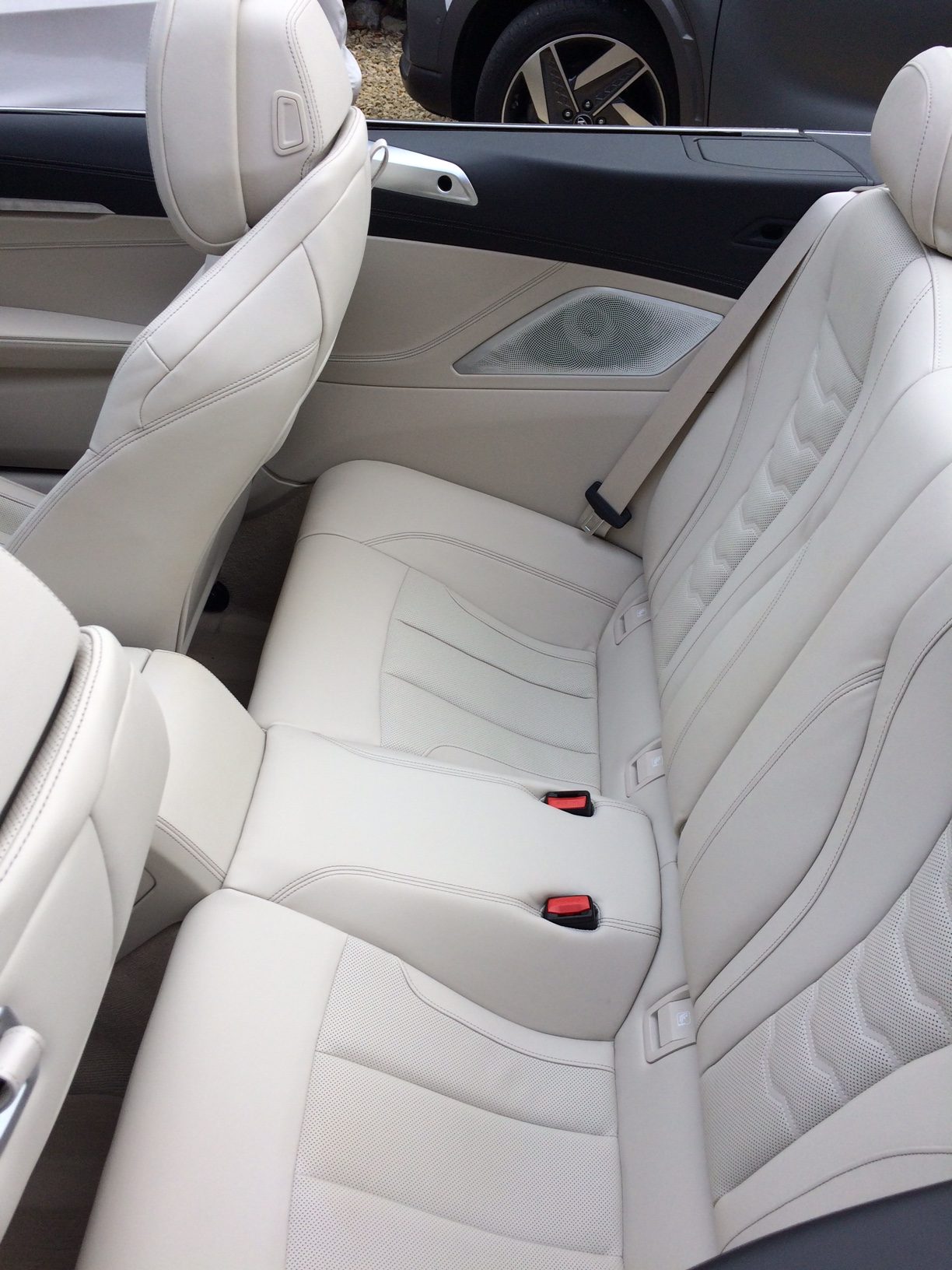 Room is a real compromise in the BMW 840d Cabriolet. Those in front have plenty of space to stretch out and the seats have an extremely wide adjustment range while providing very high levels of support and comfort. The two rear seats are well padded but not as well shaped or supporting and knee room soon becomes and issue if the front seats are moved back. Oddments room is virtually non existent in the rear but infront are long shallow door bins, a huge central console box, smaller compartments on the transmission tunnel and a decent sized glovebox. 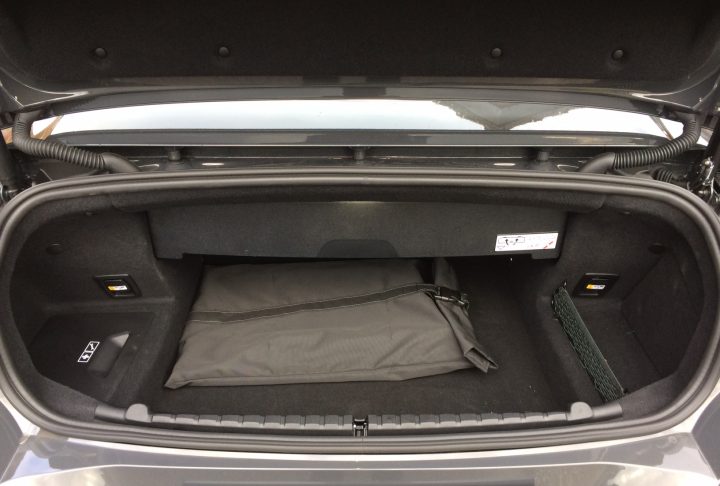 The mechanism to fold and contain the roof takes up room in the bootspace and while the lid opens wide you have to slip soft items to the front under it and larger bags nearer the rear, but even then its not immense for the overall size of the car. Perhaps those who buy the BMW 840d will want no more room than that for a couple of g-strings and gold credit cards, who knows.

The long elegant lines of the BMW 840d conceal a car very capable of gobbling up motorway miles or winding around mountain passes and through sweeping country roads, but also deftly dipping into urban life. Sensors and cameras around the car ease parking worries caused by the erect roof’s blindspots and those wide wings and small rear window.

The more you drive the car, the greater your appreciation for it, whether it’s the looks, sophisticated leather trimmed interior, mechanical refinement or surefooted handling. 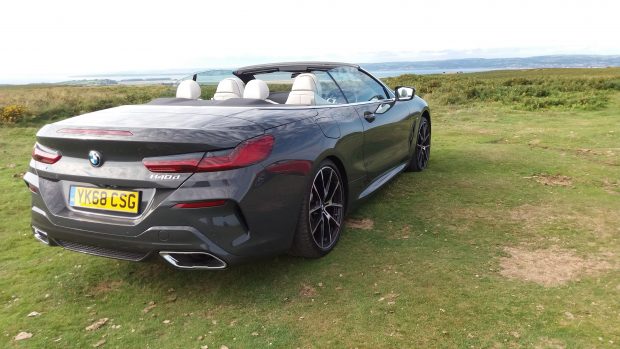 It’s a refined and rare car, not without its shortcomings in vision and rear seating or practicality, but it really has very few rivals.

You can smile in anticipation of a journey and afterwards, and there are few cars which are so pleasurable.