Some stories start with a conventional beginning, others with an ending before the real story unfolds, much like the Audi R8 V10.

When you switch off the engine and open the driver’s door a distinct heart-beat can be heard and while you think it may be yours finally calming down, it’s not.

The rhythmic and familiar sound is a marketing masterpiece, while at the beginning of your journey the engineering masterpiece entrances your senses which are shaken when the 5.2V10 fires into life centimetres from your skull. 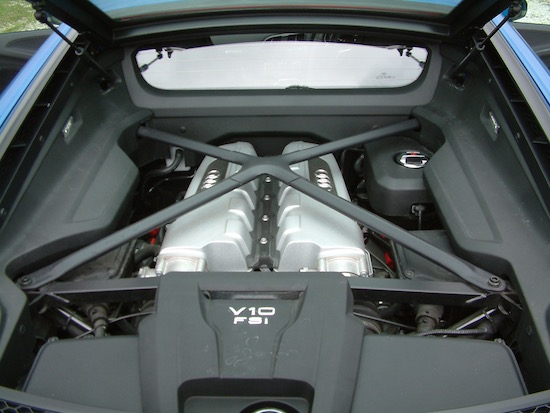 This is a serious bit of kit and it wants you to know beneath the rear glass cover. Launched as a 4.2V8 mid-engine supercar in the 2006 Paris show, 28,600 examples of the  first generation were sold before the second series hit roads in August 2015, and the smaller engine was discontinued in favour of the 5.2 litre V10, which was also offered in the first series.

Coupe and Spyder versions of the first series will be duplicated later in 2016 when an open topped version of the second series is launched alongside the present Coupe styles.

The 2016 Audi R8 V10 is the more popular version of the two coupes, easily explained by a price difference of £15,000, and why not if it gives you almost as much excitement and a decent contribution to your insurance premium.

At the moment there is a choice of R8 Coupes, a 540ps V10, we tested, or 610ps V10+. The more powerful version is tweaked derivative with 560Nm as opposed to 540Nm in the standard car and top speed is 6mph higher at 205mph with 0-62mph covered in 3.2 seconds, some 0.3 seconds sooner than the V10. The V10+ gets a smaller petrol tank and weight saving ceramic brakes as well but is otherwise the same powertrain, chassis and fittings.

Using the same powertrain as Lamborghini Huracán the Audi R8 V10 comes with drive select modes to sharpen responses of engine, seven-speed sequential automatic transmission with normal or sporting modes, adjustable steering and suspension. It defaults to an automatic mode but you can select from there.

Even in its default modes the R8 is rapid and engaging with a firm setting which belays its actual comfort but select another mode and it’s instantly transformed.

Acceleration is very, very strong, pushing back driver and passenger in their seats. There is no delay, it’s instant because there is no turbo-lag as it’s a naturally aspirated engine but ease off and the engine’s brain decides how many cylinders are needed, saving fuel and cutting noise, slightly.

From rest it’s rapid, overtaking is responsive and very quick, while it cruises on motorways at a relaxed pace unless you want to go much quicker.

Gearchanges are silken and swift, even sharper in the dynamic mode, when the engine blips the throttle on downchanges for bends or roundabouts. There a console selector and paddles behind the wheel.

Underfoot, the brakes are eight piston front calipers and four piston rears which really have such a subtle feel and effective stopping power you wonder why anyone would want the additional expense of ceramics, which can be deader to the touch.

In the driver’s hands the powered steering felt really well balanced with a tight turning circle, excellent progressive power and no kickback or vagueness.

Dominating the fascia is effectively a computer screen infront of the driver which you select to display engine and road speed information, a pile of bespoke data on driving modes or trip details, navigation and infotainment. Priority can be given to any particular function and others back it up.

The way the information is displayed, the wrap-around feel to the major and secondary controls make this a driver’s car and the passenger is just there for the ride; of his or her life. Put simply there is not a lot for the passenger to see or do, just experience. And what an experience. 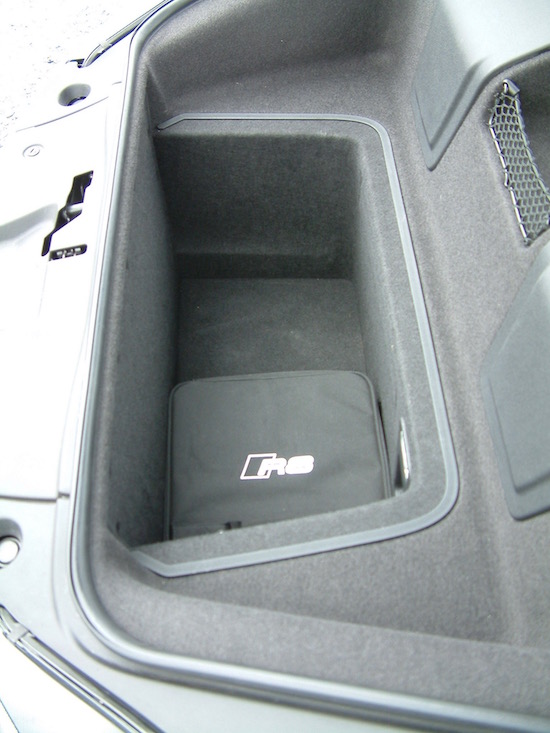 The interior is roomy for two with a small shelf behind their heads, some compartments on the console and slim low door-bins as well as a compact glovebox. Up front the boot will take an overnight or weekend bag, but little else with just over 110 litres capacity (right).

For a mid-engined car, visibility is surprisingly good. You sit low but the waistline is low and the windscreen is deep so there are good sightlines to exploit the glass area, big quick wipers and very bright LED headlights. To the back you have a camera system and sensors but the rear window is slit-like and the sweeping roofline cuts out over-the-shoulder vision so you have to carefully position the car at junctions to see up the road.

Once on the move the ride is firm but most bumps are pushed away unless you are in dynamic mode, there is no body roll and the car corners well and stays firmly planted. It just gobbles up the miles.

Noise levels are loud most of the time but I suppose you buy a car like this to be seen and heard. You want maximum value from your investment and you get it in the R8.

You may buy the Audi R8V10 with your accountant’s head on, but you’ll enjoy it with your heart, every beat of it.