You are here: Home / First Drives / VW Passat rises to the challenge

Driving on your mirror takes on a whole new meaning in some of the new Volkswagen Passat models arriving in dealerships this month.

At launch, the UK buyers will get only diesel engines comprising 120PS 1.6, 150 or 190PS 2.0 litre and 240PS bi-turbo 2.0 wit DSG transmission and 4Motion all-wheel-drive. A low emissions 1.6 BlueMotion petrol producing 95gkm arrives in June and the following month it will be joined by the Alltrack Estate with October seeing the arrival of the eagerly awaited 1.4 petrol coupled to a plug-in hybrid electric powertrain. There are only Saloon and Estate versions and the current CC model will continue as it is.

There will be S, SE, SE Business, GT and R-Line trim levels with specific user designed features and equipment building on the basic advanced safety and collision avoidance systems. They are grouped from 12E to 28E for insurance.

Technology highlights inside the eighth generation Passat include optional 12.3-inch TFT display instead of the usual instruments panel but including all the features and combined with head up and navigation systems, all-round parking view as well as self-parking and trailer parking assistance.

This is a world first for Volkswagen and uses a rear camera and computer programme to steer the combination into a space with the driver operating the mirrors’ adjustment toggle switch to fine tune the manoeuvre and correct with a touch on the steering wheel if necessary.

It really works very well and simply.  Braked trailer weight limits run from about 1500 to 2200 KG depending on specific models.

Business users comprise 80% of Passat buyers so the focus on diesel has been to meet them despite the fact that the latest European and UK Governments want to penalise them for the higher NOx emissions. VW expect the best selling new Passat will be the 150PS 2.0 SE manual Estate taking 51% of this sector in SE Business trim, which is also going to account for 60% of business sales.

Passat manager for Volkswagen, Sally-Anne Norris, said the decision to introduce only diesel engines in the new series was driven by the fact that only 1% of sales were petrol in the outgoing seventh series and the business buyers covering 17,000 miles annually looked to diesel to save costs.

Trim levels mirror those on the latest Golf series but there are enhanced packages for business users including a highly advanced satellite navigation and communications system, she said.

The additional safety equipment means the new Passat is two groups lower to insurer than the outgoing version on a like for like basis. 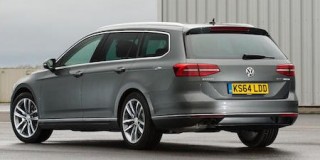 Its good pick up and flexibility through the gears made easy work of undulating Midlands roads but I found the long travel clutch and slightly notchy gearchange detracted from its smoothness.

The lower powered 120PS 1.6S version was easily more economical at 50.2mpg and it what it lacked in performance, particularly noticeable when pulling uphill or overtaking, it compensated for with a more composed engine note.

The top version with its 240PS bi-turbo output, seven speed DSG automatic box and tech-packed specification including four wheel drive was a real wolf. It snarled and grunted its way through the fuel at 37.9mpg and left you in no doubt it is out to bite other German rivals in the market.

All three cars we drove steered and braked well, rode smoothly thanks to the selectable suspension and had a lot of room inside and in the boot or on the loadbed, both of which were easy to access. 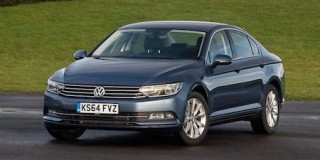 Only time will tell if the new Passat is good enough to keep fans happy in a size-sector which is shrinking and now dominated by the taxi sector.

Revealed at the Paris Motor Show in October, it is the eighth-generation Passat in 41 years with over 23 million sales worldwide, writes David Miles.

Everything in this car is new: its design, technologies and engines.  The Passat sets new standards with an unladen weight that has been reduced by as much as 85 kg and fuel economy figures that have been improved up to 20 per cent.   For the first time, there will also be a Passat with a plug-in hybrid drive system.

It features a ‘cab backward design’ and the front radiator grille displays four chrome bars which bend inward towards the headlights in a trapezoidal shape, and the lowest chrome bar of the grille continues into the headlights.

Immediately noticeable at the rear is that the cab has a strong inward sweep towards the roof and at the bottom it flows into the wide, flared shoulder section.  The rear lights have been made considerably wider and leaner.  In this way, the Saloon looks like a young sibling of the Phaeton with its large bootlid surface and a distinctive crease beneath the rear lights that extends across the rear.

All models of Passat have LED rear lights, while the higher-specification versions feature a distinctive horizontal tail light display that switches over to a vertically oriented brake light signature under braking.  Headlights are halogen or LED.  In conjunction with Dynamic Light Assist, one of the two LED headlight options automatically adjusts the beam for maximum illumination of the road without dazzling other traffic.

Despite exterior dimensions that are actually marginally smaller than those of the previous Passat, interior space is improved, with more leg- and head-room, as well as increased luggage space in the saloon of maximum 586 litres and 1780 litres for the Estate. 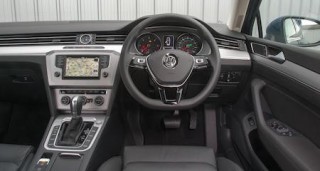 New technologies to be offered on the new Passat include the optional Active Info Display, which replaces the instrument cluster with a fully configurable interactive 12.3-inch TFT display and a heads-up display.

Also available is the latest Modular Infotainment System, including the Car-Net remote app; a further-developed 360-degree Area View function; and the latest generation of Park Assist.

This newly developed Park Assist includes the option for the car to park itself forwards into perpendicular spaces – useful, for example at supermarket car parks, where access to the boot is important.

Safety technology includes Side Assist with Rear Traffic Alert; Traffic Jam Assist which makes stop-and-go driving more comfortable; Emergency Assist, which can potentially halt a vehicle when the driver is incapacitated; and the latest Front Assist system with City Emergency Braking, which optionally combines both radar and camera sensors to add pedestrian detection.A highlight of the Passat’s new range of engines is a high-performance, four-cylinder, 2.0-litre, bi-turbo diesel delivering 240 PS and an extraordinary 500 Nm from 1,750 rpm.

This engine will be available only with a new seven-speed DSG gearbox and 4MOTION all-wheel drive.  A plug-in hybrid model will also be offered, with potential to travel 31 miles on battery power alone, and with a maximum range of around 600 miles.

Sally-Anne Norris VW’s UK Product Manager for Passat said at the media launch this week that in 2014 in the UK they sold 8,616  Passat saloons, 11,042 estates and 5,288 CCs, this makes the Passat family our fourth best selling model range  behind the Golf, Polo and Up. On average previous Passat UK owners have been 50+ years in age and predominately male. 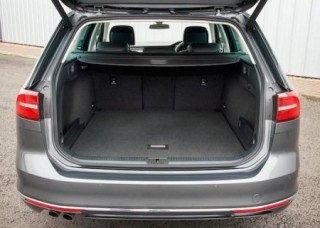 She added that over 80% of Passat’s UK sales go to fleet customers.  The best selling versions in saloon and estate forms will be the 2.0-litre TDI 150hp with SE and the newly introduced SE Business trim levels.  The SE saloon with this engine and manual gearbox costs £24,435, the SE Business saloon £25,135, the SE estate 25,965 and the SE Business spec estate £26,665.   As an example a PCP three year rate for an SE Business spec Passat with the most popular 150hp engine will start from £374 a month.

Also, there is a much higher level of specification, the residual values are higher and in most cases the insurance group ratings are lower.