You are here: Home / First Drives / Vauxhall expects to turn a corner with the all-new Zafira Tourer 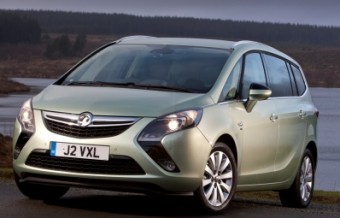 While the derivation usually implies a model half way between a saloon and estate car, the Vauxhall Zafira Tourer is really a scaled up and more modern take on the Zafira compact MPV seven seater.

The fact that people are gradually increasing in size and therefore expect more space has spurred development of the Zafira Tourer, which is longer and wider than the current Zafira introduced six years ago with the clever Flex7 seating system. It sits on a completely new platform unlike the current Astra estate-derived Zafira, but it’s not an “Insignia MPV” and it comes with the very latest quicker-folding Flex7 seats and sports a much higher grade interior, although it is still a seven seater.

Because it is literally a class above the current Zafira, Vauxhall say the Zafira Tourer will take on the Ford S-Max, Peugeot 5008 and Citroen C4 Grand Picasso among others, the current Zafira will remain on sale to compete against its rivals such as the Ford C-Max, VW Touran and Renault Grand Modus. However, Zafira has been trimmed to eleven models from £18,500 to £24,000 while the Zafira Tourer start at £21,000 and range up to £28,465 with 31 models in the price list and there is a truly huge options list to personalise as much as possible.

The all important taxing CO2 emissions range from 137g/km for most diesel models but the 129bhp ecoFlex diesel engine with the stop-start option has CO2 emissions down to 119g/km. The 1.4 turbo petrol engine produces 158g/km and the 1.8 petrol unit 169g/km. For company car and business user chooser drivers the Benefit-in-Kind tax rate is 19 per cent for the diesels, except the stop-start version where it is an appealingly low 13 per cent, 21 per cent for the 1.4 petrol unit and 23 per cent for the 1.8 petrol engine.

To compliment the wide range of engines are five levels of trim and equipment – ES, Exclusiv, SRi, SE and Elite. Exclusiv will be the most popular level.

In 2011 the Zafira remained the top seller in the MPV sector with 20,590 annual registrations. Vauxhall is tight-lipped but say they expect it to bring them incremental business. Looking at the market it suggests Vauxhall might see Zafira Tourer take 6,000 UK sales this year and around 8,000 next, and believe they will in the most part be to private buyers, reversing the current situation with Zafira. It also has the smaller Meriva MPV in showrooms so it is well represented in the family sectors.

However, Vauxhall is also hoping to widen the appeal of the Zafira Tourer to families who currently run big estate cars or 4x4s but who now want something with lower emissions, better economy and without losing capacity and the newcomer offers between 710 and 1,860 litres capacity as well as over 30 storage compartments in the cabin.

The Zafira Tourer will be a powerful missile in the latest space race sweeping through showrooms. 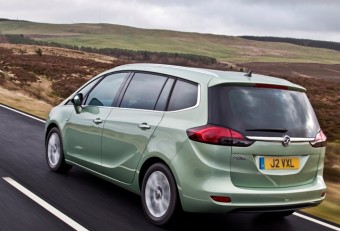 This was a particularly agile and smooth riding model, its diesel powertrain being adequate when used by two people but it would have to work hard with more aboard and this would impact on the fuel figure. More space in Zafira Tourer for MY12
It was willing, smooth and quiet at all but the highest engine speed, it rode well and cornered with confidence.

The more powerful 165ps 2.0 Elite was livelier, tauter handling, a bit noisier, but would be better in a more demanding role. However even driven at modest speed it only returned 31mpg.

Gearchanges, steering and brakes were good with both models and the new Flex7 seats are really versatile and easy to use, fold or erect. The multitude of oddments space should satisfy anyone, until you lose something in one compartment and try to find it.

At the back the big door opens from below knee height to reveal a wide, flat loadbed with good straight sides and the back doors give further access to this area.

In conclusion the new Zafira Tourer is an immensely practical, versatile and comfortable family car with a wide range of possible models and a keen pricing structure throughout.

It is an excellent and welcome addition to the range.