Britain is likely to see an annual market of about 2.3M new cars registered by 2020, that’s the opinion of Welsh Automotive Forum Chairman and international economist Prof Garel Rhys CBE on the eve of this year’s 15-plate registrations. 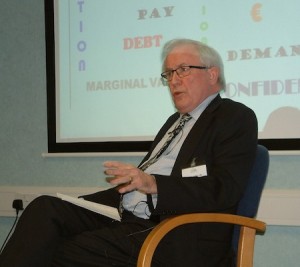 Speaking to WAF members at their first regional meeting of 2015 held in Waterton centre, Bridgend, this week, the UK’s leading automotive economist said a number of factors now made this level of sales a probable reality. “Manufacturing productivity in Britain is excellent,” said the Professor. “In 2000, manufacturing output per man was £36,000 but last year it was £56,000 excluding inflation.”

He said this makes Britain the most productive area in Europe to build cars and vans and included the massive Nissan plant in Sunderland which is a shining example to others and one of the best investments which has ever been made in the UK.

This plant is close to making about 530,000 new cars a year and they are what customers want to buy right across Europe, he said.

In the Midlands and North West, Land Rover and Jaguar are seeing incredible demand and their premium products are being sold around the world and the supply chain supporting them is benefitting enormously, he said.

The Ford Engine Plant at Bridgend and Toyota engine plant on Deeside will benefit from this growth over the next five years as they supply power units for models sold around the world.

It is also very important to remember the contribution from the van sector said Prof Rhys, led by the Vauxhall plant at Luton, although CV manufacturing in the UK is not what it was a generation ago.

“The motor industry in the UK is in good health and there are further opportunities to grow, but its up to us to grab them,” he said.

There are opportunities and threats for automotive suppliers members were told by other speakers at the meeting.

Gary Wilson, director of business development at the APC, said it was now well advanced with assisting companies across the country to bring into production some exciting new technologies and projects which will ensure the UK remains at the forefront of the global automotive industry.

The deputy director of Industry Wales’ Advanced Materials & Manufacturing sector, Dickie Davies, said it was vital that WAF members took advantage of every opportunity to develop their skill base and projects. For every a £1 invested in Wales it earns £7 for Wales in return, he said.

This year’s Autolink 2015 conference and exhibition will be held in Cardiff in July and will provide a real opportunity for those in the automotive industry and related businesses to come together for their benefit.

With so much business now being conducted on-line it is vital that WAF members fully understand the risks they face from cyber-criminals, said Detective Chief Inspector Gary Phillips.

He told the audience it was important they kept their IT security systems fully up to date and were aware of any suspicious approaches or activities.

Threats may come from cold callers, via emails or through social media and there is also the possibility of getting systems remotely locked and being blackmailed into paying for them to be freed, said DCI Phillips.