You are here: Home / Motorsport / Two day trial tests the best in All Wheel Drive Club round 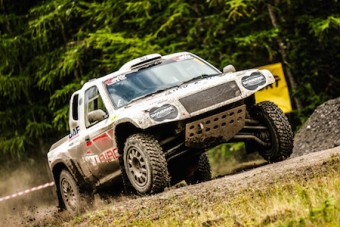 A combination of wet and dry weather conditions created unpredictable and unstable terrain and proved the toughest challenge for the Defender Challenge contestants as they embarked on the third round last weekend at the All Wheel Drive Club Allisport Hillrally at Walters Arena, Glynneath.

Ten Defender 90s, modified to FIA rally standards, took the startline for a gruelling 16 stages of forest and slate gravel sections over nearly 12 hours in two days. Walters Arena, renowned for its abrasive terrain lies in the picturesque pine-clad Powys hills in the heart of a windfarm and provides extreme conditions for high-speed, low friction driving, as such it is a regular location for Land Rover’s test and development engineers looking to put the future generation of Land Rover vehicles through their paces.

Heightening the drama of the weekend, the Bowler V6 supercharged Defender 110 prototype made its debut with its first race evaluation. Preparing for an additional Class Two for next year’s Defender Challenge, Bowler Motorsport’s Brand Director Jon Chester said, “Opening an additional class to the Defender Challenge is the next evolution in our progression to bigger events. The Defender 110 with the V6 is a genuine and credible rally-raid car, it has the handling characteristics and power appropriate for desert racing and will give our Defender Challenge drivers opportunity to experience the bigger races on a more competitive level.

The third of six rounds of the Defender Challenge, the Allisport Hillrally is regarded as an important round for competitors looking to gauge their progress and predictions for the final championship standings. The teams started enthusiastically and by first service, nine of 10 Defender Challenge cars returned to the bivouac looking strong with very few complications in stages one and two but car 20 had an incident on the course causing damage enough to render the team unable to continue.

In car 9 The Defenderists driver Ryan Cooke and co-driver Paul Mansfield put in a strong performance in stages one and two having joined the team fresh to the season for round three.

Seasoned rally driver Ryan explained, “I spent the first two stages learning the car and doing my best to get that experience quickly, but the stages are very unpredictable so it was a double challenge.”

The Defenderists finished second after stages one and two behind Edd Cobley and John Tomley by one minute and a second, drawing the lines for a battle for the top spot.

By lunchtime, Edd Cobley and John Tomley in car 8 were ranking first nearly two minutes ahead of Gareth Carruthers and Wallacer McKay who progressed to second place in car 11 with Brian Palmer and Calum MacPhail in car 19 just 52 seconds behind that in third. Ryan Cooke and Paul Mansfield sat in fourth having experienced some mechanical difficulties in stage four.

Day one closed with Edd Cobley and John Tomley at the top of the Defender Challenge class leader board having completed nine stages in 01:34:59 and ranking fifth in the overall rally.

There was a busy night in store for the Bowler technical team who had some work to do to get The Defenderists ready for a second day of rallying, but in true Defender Challenge style, pulled together to get the job done.

Fortunately, all other Defenders required little preparation to be ready for day two and all the cars and crew retired to rest by 11:30pm.

After a heavy overnight downpour, the sun rose over the Welsh hills for day two of the Allisport Hillrally and course conditions were muddy with sections of standing water. At first service competitors remarked on the lack of traction and poor visibility due to mud and water splashing from the track onto the windscreen. Brian Palmer said, “The greatest challenge today is the unpredictable terrain, today’s course is totally different to yesterday. There is no grip in many of the corners so we have to take it easier than we’d like.”

Results for stages 10 to 13 reflected at tentative start across the field but conditions started to improve with much of the mud drying out to provide a steadier surface and easier progression into and out of the corners. By lunchtime, competitors were confident and looked to make the final three stages count.

Conditions were not all they seemed however, and three teams limped back into service after stage 14 with varying degrees of damage. Car 27 pulled into the bivouac with damage to its nearside front and offside rear corners the result of some deceptive terrain. The damage appeared significant but was largely cosmetic an immediately all hands were on deck with support from other teams making themselves available to repair the bodywork and damaged components. With power-steering and intercooler hose repaired, bodywork melded back into place and secured with temporary solutions, car 27 was back on track within 40 minutes having to take one stage out but making it through to the end of the rally.

“This is the true spirit of the Defender Challenge” enthused Bowler Technician Iain Peever who lead the repair. “The Northern Irish Team jumped in to help us out and we just kept going until the last minute.”

Gareth Carruthers and Wallace McKay also received repairs and returned for stage 16 whilst Christian Fremont and Peter Janssens in car 18 had to retire due to a damaged roll-cage.

The remaining competitors went into the final stage with trepidation and focus and the eight teams retuned after the longest stage of the day exhausted yet elated and keen to see the final results. Round three closed with Edd Cobley and John Tomley in first position and fifth in the rally overall in Sturgess Land Rover’s car completing the 16 stages in 02.45.29. In second place Garreth Carruthers and Wallace McKay for Lookers Land Rover in 02.56.47 and Brian Palmer and Calum MacPhail finished in third having completed the course in 02.58.54.

Having completed the two-day hill rally in the Bowler V6 Defender 110 without incident Drew Bowler, Managing Director of Bowler Motorsport commented on the assessment, “I’m really pleased with how the vehicle performed this weekend, we have a few suspension modifications to make but the development is coming along very well.”

The Defender Challenge resumes on 26 September with the Trackrod Rally in Yorkshire.

Congratulations to Chris Bird on his stunning win.

There was a fierce 3 way fight for the top spots between Chris Bird in his Milner R5 (above), Andy Degiulio in another Milner R5 and Rick Mann in his RMOffroad Dirtstar 4×4.   Andy set the fastest stage time on the first stage but was overhauled by Rick Mann on runs 2 and 3.

A puncture on Stage 6 robbed Rick Mann of the lead and despite setting the fastest stage times on 4 of the 7 stages on Sunday Rick was unable to claw back the time lost.

At the end of Leg 1 Chris held the lead by nearly 2 minutes from Andy Deguilio.   Based in South Wales, Chris posted consistently fast stage times on every stage with an especially committed run on the 12.5 mile final stage of Leg 2 on Sunday taking nearly a minute out of his nearest rivals.

A roll on Stage 14 put the Belgian crew of Christian Fremont and Peter Janssens  out of the event, prematurely ending a strong performance.  Henry Webster in his Modified Production Landrover Discovery had gear box problems on Stage 6, which put paid to the rest of Leg 1.

The event allows competitors to rejoin the event, with time penalties, even if they have missed stages and after a long evening’s work the gearbox was replaced ready to start the second Leg on Sunday.

It was worth all the hard work as he set impressive stage times trading times with competitors in Prototype classes.  Spread over 16 stage and over 110 stage miles the course was challenging. Dry and dusty on Saturday the terrain changed dramatically after a downpour on Sunday morning before the first stage. Several competitors, including Chris Bird, found the conditions challenging with little grip.

Go Motorsport held an informal welcome and introduction to marshalling training on the Friday evening, which was well received by all those who attended.

The All Wheel Drive Club would like to thank the event sponsors; AlliSport for their overall event sponsors and all the stage sponsors.   Most importantly AWDC want to thank all the event officials, marshals and rescue and recovery units who gave up so much of their time. Without their help the event could not have run.