You are here: Home / Featured / TrawsCymru service is just the ticket hundreds 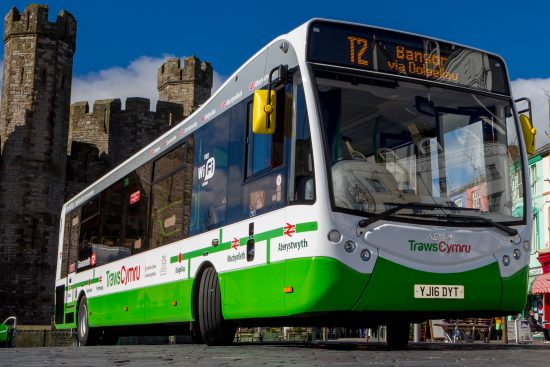 The TrawsCymru network has seen a huge increase in passengers across the network since the Welsh Government launched its free weekend bus travel pilot in July, figures have shown.

The Welsh Government funded pilot applies to all buses on the extensive TrawsCymru network and will continue every weekend until at least May 2018.

When compared with data from the previous year, increases of well over 100 per cent have been recorded across the network, with the T4 service between Newtown and Cardiff currently boasting the greatest increase.

Welcoming the news, Economy and Infrastructure Secretary Ken Skates said, “The TrawsCymru network covers large areas of Wales, some of which would otherwise be inaccessible by public transport and it’s extremely encouraging to see this pilot boosting summer passenger numbers.

“From Bangor to Cardiff, Fishguard to Wrexham, this scheme provides a perfect opportunity for people from across Wales and beyond to jump on a bus and spend their weekends enjoying the diverse beauty of Wales and I am delighted it has already proved so popular.

“For those who are yet to take full advantage of the pilot, there’s still time to find out where your nearest service could take you. I’ve been keen that this pilot, at the very least, serves to increase the awareness of what bus services are available locally and today’s figures suggest that to be the case. I look forward to seeing how this TrawsCymru increase has impacted other services later this year.”

The highest increases in total daily bus passenger numbers including child and concessions were recorded on the following days and services: