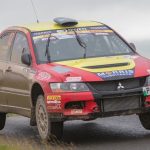 The Nicky Grist Stages has won the prestigious Bill Turner Trophy for the Best Event in the 2016 Ravenol BTRDA Rally Series.It’s the fourth time that the Quinton Motor Club-organised rally has won the award, having lifted the trophy in 2005, 2010 and 2012. It has also been nominated as one of the top three best organised BTRDA Rally Series events for the last six years in succession.Luke … END_OF_DOCUMENT_TOKEN_TO_BE_REPLACED