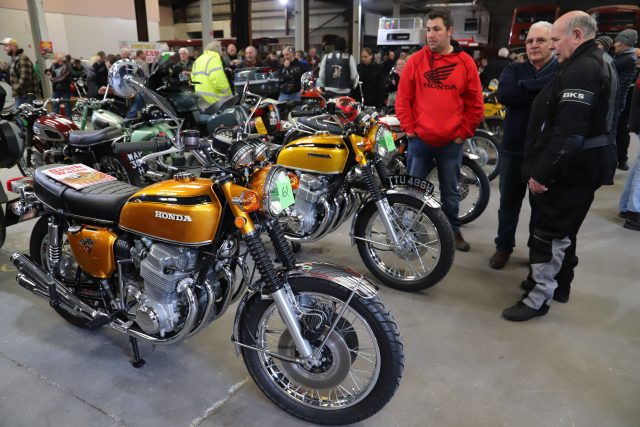 The show is open to the public from 10.00 am to 3.00 pm, with over one hundred glittering machines from virtually every era and manufacturer on show, plus some interesting and intriguing ‘barn finds’ that prove that collectible ‘bikes can still be found for renovation !

Among the entries are racing machines such as a 1979 Yahaha TZ125, and Honda 250 NRS, a 1972 Honda 350 k4 racing machine just back from the Isle of Man,a rare 1950 Norton Manx and late ‘fifties Velocette Venom from Swansea racer Godfrey Benson. Models from across Triumphs range from Cub, Tigers and Bonneville, BSA’s including the legendary Road Rocket and Gold Flash models, AJS, Matchless, and Norton just some of the machines from Britains ‘golden era’ on two wheels.

Other rarities include a BSA Bantam Telegram riders bike that sped good news and sombre through Swansea streets, a superb SS80 Brough Superior from 1934, still as pristine as it was eighty five years ago, and a more humble but equally fascinating HJH 197cc Trials bike made in 1955  at the Canalside works in Neath.

Add to this small selection the giant Virago ‘bikes and trikes, the Honda Gold Wings, and the diminutive machines from Raleigh and NSU, plus the new age two wheelers from Honda, BMW, Yamaha, Suzuki, Kawasaki, Ducati, and Harley Davidson.

Also on show will be the Museum’s usual buses, lorries, vans, cars and other exhibits, plus on site refreshments and you have a day out not to be missed. Entries can still be made via the Museum website swanseabusmuseum.com, but don’t delay !