All are diesel powered with an eight-speed automatic gearbox for now although petrol versions could be added to the UK line-up in future. The T8 Twin Engine petrol/electric plug-in hybrid power source will be added later this year to the S90 and V90 line-ups but not the V90 Cross Country range.

At the UK media launch this week Iain Howat, Volvo’s Head of Product Pricing in the UK said they do not give a sales forecast but up to around 4,000 units of the S90/V90 would be a sensible number for the UK market this year and we have said we expect to reach annual sales of around 6,000 units by 2020.

He said around 75% of UK customers will choose a V90 estate and the vast majority of customers choose the D4 190hp engine.   When it comes to what specification is most popular for the V90 he said it will be an equal 25% split between Momentum, Inscription, R-Design and Cross Country. For the S90 four door saloon the expectation is Momentum and R-Design levels will take 35% each and 30% will choose Inscription. In future around 10% will opt for the yet to arrive T8 Twin Engine plug-in hybrid model.

Of the new additions to the line-up he said the Cross-Country will have a UK sales bias towards retail customers and the R-design spec level will be more popular with fleet and business user-chooser customers.

The S90 and V90 together with the award winning XC90 large SUV range are part of Volvo’s new ‘90 series’ and all use the Volvo designed and built Scalable Product Architecture (SPA) platform. As standard all versions have Volvo’s Pilot Assist semi-autonomous drive technology.

This takes care of the steering, accelerator and braking at up to 80mph. It will keep the car within its driving lane at a set speed and no longer requires a lead vehicle. The system also has City Safety for pedestrian and large animal detection and run off-road mitigation functions. The range has a Euro NCAP 6-star safety rating for pedestrian protection.

There is also intuitive infotainment and connectivity functions operated via a nine-inch tablet style vertical touchscreen which allows voice control of some functions and Apple CarPlay and Android Auto are included. The touchscreen also operates the Sensus Navigation system with full European mapping with traffic information and lifetime map updates.

At the UK media launch we concentrated on the V90 Cross Country estate models as the launch of the R-Design variants was more about specification than performance.

The new V90 Cross Country is the fourth generation of go-anywhere Volvo estates. The first was the V70 XC launched 20 years ago in 1997.

The V90 Cross Country version we tried was the 2.0-litre D4 automatic with AWD, the most popular choice with UK customers and as I’ve already stated costs £39,785. This is competitive with the slightly smaller Audi A4 2.0-litre 190hp quattro Allroad models and significantly cheaper than the equally sized Audi A6 3.0-litre 218hp quattro Allroad variants.

The standard V90 estate when launched alongside the S90 saloon last year quickly gained praise for their classy upmarket styling outside and their premium quality Scandinavian interior design which was clean and unfussy as well has being very spacious and comfortable. The Cross Country application of the V90 builds on that being a very capable and comfortable cruiser cladded with body protection giving it a more purposeful and rugged look and of course loaded with equipment.

The on-road ride quality is better than the standard models with slightly softer suspension settings and bespoke tyres which have a courser grip pattern but with softer flexing side walls for better off-road performance. Even with the suspension raised to offer 65mm of extra ground clearance the cornering bodyroll was well controlled with the big estate riding flat and level with no obvious increase in noise intrusion from the coursers treaded tyres.

The steering remains on the light side but the directional stability is sharp thanks to the double wishbone front suspension. At the rear the multi-link system with its cross-mounted composite leaf spring worked really well minimising bounce and giving a cushioned ride on undulating road and off-road ride comfort was first class.

The AWD system runs on-road through the front wheels most of the time but in milliseconds distributes power to the rear wheels for extra control. The Drive Mode selector has Comfort and Dynamic modes and mostly for tarmac travel its best left in the Comfort setting.

With this Cross Country version the mode selector also has an Off-Road mode which locks in AWD and engages Hill Descent Control automatically and keeps the estate at a set speed down steep slopes.

The Off-Road setting also alters the operation of the four wheel drive system and responsive of the engine, gearbox and accelerator pedal. This operates at speeds under 25mph. Over that speed the Drive Mode automatically goes back to standard on-road Comfort driving settings which is very clever and foolproof.

Driven over muddy, slippery and wet tracks in Cannock Chase Forrest the V90 Cross Country impressed us all and performed much better than some specifically designed mid and large SUVs. Yes its progress will be limited if tracks become too rutted and the vehicle bottoms out but up-hill or down it seemed the most capable of the 4×4 estates on the market today.

The Volvo Drive-E four cylinder turbodiesel engines are generally also highly rated by those that have tried them. The D4 unit in our test car provides 190hp and a hefty 400Nm of torque from 1,750rpm well matched with the eight-speed slick changing auto gearbox.

Officially the Combined Cycle fuel economy is 54.3mpg while our test driving around motorways and rural winding roads the overall real-life figure 38.5mpg. As so often with most modern-day engines this figure was not close to the official EU test figure but given the AWD system and auto gearbox, plus the size of the vehicle, it was realistic.

For those that tow the braked towing weight is a healthy 2,400kg and for good measure the load space measures up as well with 560-litres expanding to 1,526-litres with the rear seat backs folded flat. 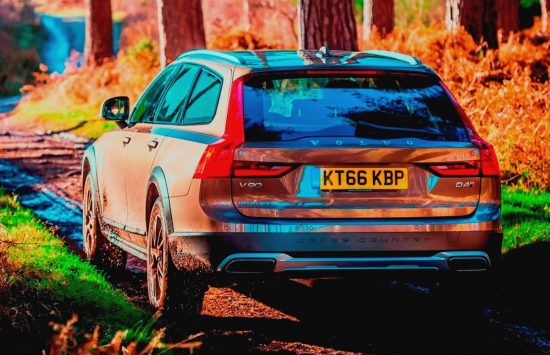 Whether used regularly for off-road work say by a farming family, vet, surveyor or similar or used as a tow vehicle by boat owners or caravaners it impressed us in tough conditions yet on the open road it remains a comfortable and roomy cruiser which eats up miles effortlessly.

For those customers who do not want an SUV the V90 Cross Country is a realistic alternative.

Against: Higher running and tax costs over a standard V90 D4 auto estate, heating/ventilation settings operated via the touchscreen or voice function instead of simple controls, on-the-road price is very close to the new VED higher tax rate for £40k plus models which applies to new cars bought after1 April 2017.