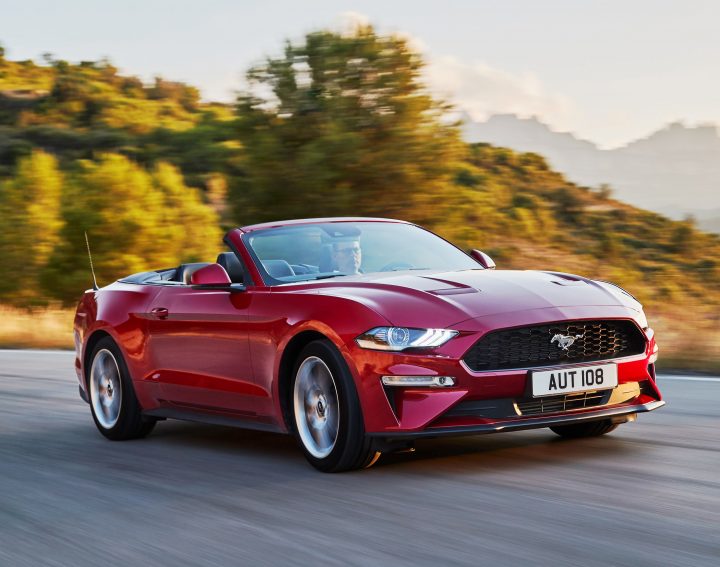 The first official Ford Mustangs came to Europe and the UK in early 2016 and now we have the updated 2018/19 versions with added safety equipment, revised engines, increased personalisation options and a variety of styling tweaks, writes David Miles.

As before the Mustang is available in two-door 2+2 seater Fastback Coupe and Convertible forms, but now with the choice of revised 2.3-EcoBoost 290hp turbo petrol or the iconic 5.0-litre V8 petrol 450hp GT engine forms and both with 6-speed manual or 10-speed automatic transmission options. There was a V8 manual gearbox Bullitt special edition version available of the Fastback to celebrate the 50th anniversary of the legendary Warner Bros film with 459hp but they are now all sold.

In August this year Ford celebrated the 10 millionth production of the Mustang making it America’s best selling sports car of the last 50 years and the world’s best selling sports car three years running. Ford has sold over 7,000 Mustangs in the UK since official imports began in 2016 and more than 38,000 in Europe. Last year the Mustang outsold the Porsche 911 in 13 European markets and the leading Euro markets in 2017 were Germany, the UK, France, Belgium and Sweden.  The Mustang GT Coupe and Convertible versions in 2017 were the best selling V8 sports cars in the UK with over 1,500 sold.

Now in its sixth generation, the latest versions Ford Mustang offers more technology, uprated performance and more personalisation options than ever. They have a more athletic exterior and an improved quality interior with soft-touch materials and 12-inch digital instrument cluster. A six-speed manual transmission option is equipped with Ford’s new rev-matching technology for smoother, faster downshifts accompanied by a “blip” of the engine. 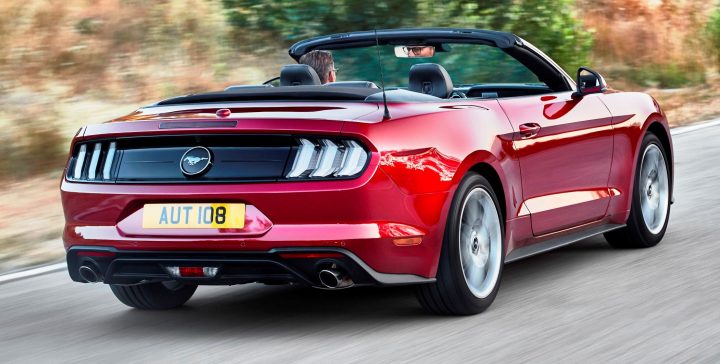 The initial 2016 European spec versions missed out on having some of the latest driving safety aids and this has been rectified for 2018 with inclusions such as Pre-Collision Assist with Pedestrian Detection and Lane Keeping Aid.

For the price, considering specification, performance, styling and iconic heritage, there isn’t another sports car that comes close to the Mustang in either its Convertible or Fastback forms. Nothing from Porsche, Ferrari, Aston Martin, Jaguar, Audi, BMW or Mercedes comes close to this sort of value for money the Mustang offers.

Some of the competition might be sharper handling, more agile and perhaps with a more premium quality interior, but they cannot match the value for money or indeed the road presence of the Mustang. It might not have the sophisticated, some might say classy, kerb appeal to suit all tastes.

It’s big, bold and brash and there’s no disputing that, but that fact that it has sold in such huge numbers for a very niche product confirms that for some people it is the ‘bees knees’ and during my time with the Mustang Convertible it drew lots of comments and interest and nobody could believe the price. Iconic American looks and value for money seem to be its big points of appeal.

The latest versions have a lower profile huge bonnet with integrated air vents with a revised wider grille with integrated outer air vents giving it a more aggressive face.  The front headlight bezels have been restyled and sit happily now with the distinctive ‘pony-car’ trapezoidal grille and the protruding under-bumper front splitter adds an air of ‘motorsport’ design.  The headlights, daytime running lights, indicators and iconic Mustang three-dimensional tri-bar rear taillights all use LED technology. The rear bumper has been remodelled with an under bumper diffuser flanked by huge quad exhaust tailpipes providing a ‘soundtrack’ that is memorable and now the loudness and tone are adjustable so as not to upset the neighbours. 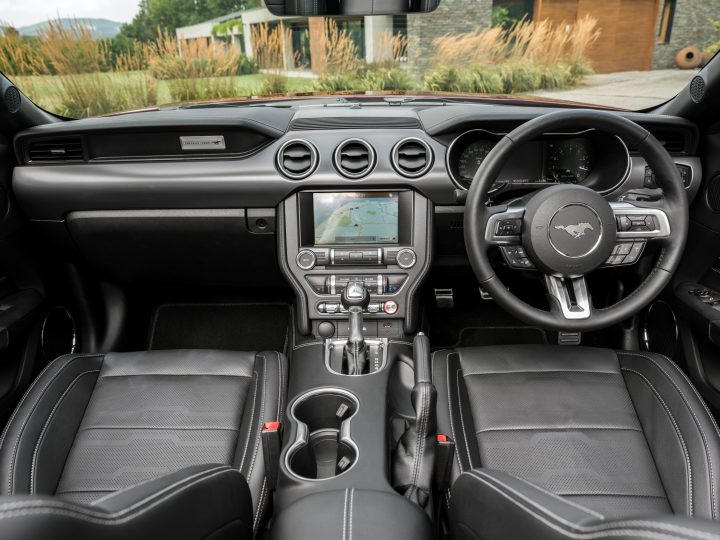 Inside there is the high level fascia with its twin cockpit design divided by the SYNC3 8.0-inch colour touchscreen and with loads of switches and controls throughout the console and steering wheel are retained.

There has been a general upgrading of the trim materials which are now soft-touch including the door cards and the interior door handles are finished in aluminium. The large centre console features hand-stitched soft-touch material with contrasting colour stitching, another move upmarket, as are the choices of four new aluminium trim insert finishes. 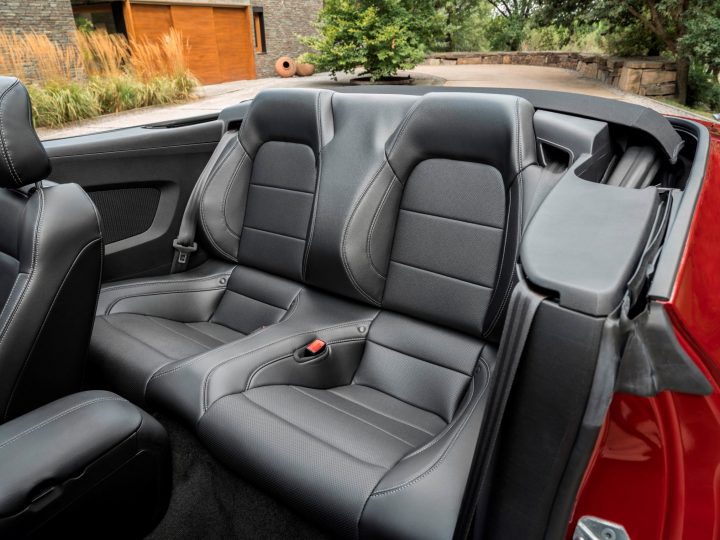 The front area of the cockpit is roomy with comfortable sports style seats and the two rear seats are also comfortable, well rounded but the rear legroom is restricted for long legged passengers.

The well insulated fabric roof lowers and rises with ease and the wind bluster into the rear compartment is limited.  The four electrically operated side windows reduce the wind intrusion raised, and when lowered show-off the classy convertible pillar-less hood down image.

My test car was fitted with the Custom Pack 4 option costing £2,365 and this included a superb Shaker Pro 12-speaker audio system, sat-nav which should be standard but isn’t, climate controlled heated or cooled front seats, Ebony partial leather wrapped centre console and 19-inch Forged alloy wheels in silver.  The Convertible test car with its black, multi-layer acoustic fabric electrically operated roof had the £795 Triple Yellow bodywork paint option but this is no longer available. If the styling wasn’t enough to grab onlookers attention the bright yellow colour certainly was.

The latest changes to this iconic engine include upgraded valve-train for the four valves per cylinder V8 unit and a new inlet manifold improves low-speed breathing for better fuel economy and emissions.

Officially in the new WLTP Combined Cycle applicable for all new cars sold from 1 September this year, it returns 22.59mpg but during my week of test driving the figure never got that low.

The overall long-term memory on the computer readout showed 25.6mpg and that included driving by other Journalists before the car arrived with me.   Having undertaken two long runs, 140-miles at relatively slow nose-to-tail traffic congested travel at 40-50mph, the real-life figure was 32.8mpg and on another 160-miles trip the figure was 31.6mpg and that included mostly 70mph motorway cruising. My week long test drive real-life figure ended up at 31.1mpg.

If you stay away from very hard acceleration and drive within the legal limits and prevailing traffic conditions this muscle-bound Convertible can be a fuel efficient cruiser.  The reality is that with 70mph cruising only 2,000rpm engine speed is being used and that is a quarter of the 8,000rpm red line rev limit, so in normal use the engine is never working hard at all.

However the CO2 figure of 279g/km puts it in the highest First Year VED road tax bracket at £2,070 but the ridiculous thing is under the current UK Road Tax charges for the second (Standard) year rate onwards it’s only £140 a year. But of course as its costs over £40k there is the confusing £310 annual supplement to add to the Standard rate charge for five years. The £140 Standard rate is the same as any other petrol powered car – even the most frugal Ford Fiesta. Where is the logic in that? Company car drivers will be hit with the maximum 37% Benefit-in-Kind tax rate. Warranty is an ungenerous 3-years/60,000-miles.

For the automatic gearbox model I tried it is a 10-speed torque converter unit with the already stated selectable driving modes with drive to the rear wheels through a limited slip differential.  I found the gearchanges in Normal mode smooth enough but they were on the slow side, ideal for comfortable cruising but even Sport+ mode didn’t give much extra urgency to swap down or up a gear or two during acceleration.  It is more a ‘cruiser than a bruiser’ even with the V8 engine and auto gearbox combination.

Generally ride comfort was good with the £1,600 MagneRide adaptive suspension option and its offers selectable Normal, Sport, Track and Drag modes.  The relatively heavy Convertible didn’t feel as agile as most of its European brand competitors.  The handling at times on poorer surfaces felt unsettled and there was evidence of body-shimmer after hitting larger potholes as the torsional rigidity is not as good as the hard top model. The steering was precise, well weighted and accurate enough. Overall the handling just felt lazy, more in keeping with cruising than sports driving but the mechanical elements are all included for enthusiastic owners to use it for a track day or even drag-strip outings. 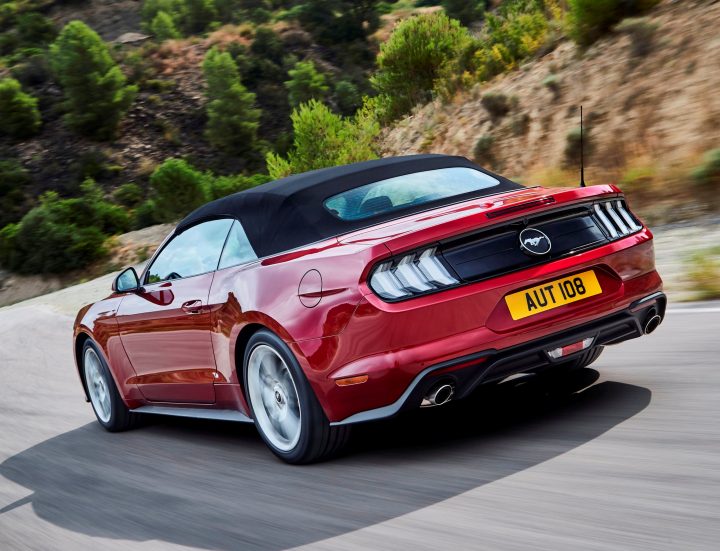 The latest Ford Mustang GT Convertible 5.0 V8 automatic may not be perfect for handling but in so many other ways ranging from iconic styling, impressive power, high spec and attractive pricing, makes it a unique offering in its ‘muscle-car’ soft-top market sector, providing you can afford the huge running costs.

You will be noticed driving one; it’s not one for the shy and retiring sort of low profile driver.