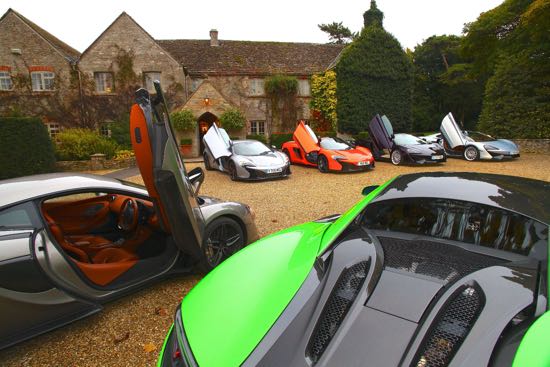 McLaren Automotive Limited has just undertaken ‘The Tour 2016’ to outline their plans for the next six years, says David Miles.

Although the McLaren name has been synonymous with motor racing for over 50 years, their Automotive Limited division, which manufactures high quality sports road a track use coupes, has just completed their first business strategy six year plan called Track 22.

Currently their range of mid-engined, rear wheel drive, two seater carbon-fibre sports supercars start at £126,000 for the 540C and rise up to £220,000 for the 650S Sports.   All are powered by a 3.8-litre, twin-turbo V8 petrol engine available with varying amounts of power outputs ranging from 540 to 737hp depending on the model. The engine is built in the UK for McLaren by Ricardo.

Whilst the V8 engine continues during the next six years, hybrid and electric technology will be introduced and at least 50% of their new models will have hybrid technology by 2022. The company says they will introduce 15 all-new cars and derivatives by 2022, each new version will now have a five-year lifecycle. The latest model is the 570hp 570GT first shown at the Geneva Motor Show this year and now being available to global customers. In the UK it is priced at £154,000 and it is expected to become their best selling model attracting a growing number of new customers to the specialist brand.

Since the McLaren car division started six years ago they have sold around 9,000 of their exclusive sports coupes to 30 global markets which have a total of 80 ‘retailers’. Six of which are in the UK – namely 1 Hyde Park in London, Ascot, Birmingham, Manchester, Glasgow and the latest at Bristol. Their biggest market is the USA followed the UK, Germany and China.

All McLaren coupes are assembled at their Woking UK headquarters where a second shift was started this year as part of their Track 22 business plan. The workforce, consisting of management, sales, marketing, design, engineering and 500 assembly employees, numbers a total of 1,750 people and that will increase in line with sales to 2,250 employees by 2022. The company’s first 15 apprentices started a month ago. With the second shift system in place from March this year production has increased from 10 to 20 cars a day.

Wayne Bruce, Global Communications and PR Director of McLaren Automotive Limited told WheelsWithinWales at the reveal of the Track 22 business plan that the company would remain independent and self funding and always profitable as they have been for the last three years. “We plan a £1 billion investment in R&D by 2022 and our turnover will increase by 50% in the next two years and double that by 2022. Currently 92% of our vehicle production is for export markets.”

“We will introduce 15 new cars over the next six years including a full electric vehicle in our Ultimate Series. We are not planning any SUV 4x4s, our customers are just not asking for one.”

On the subject of Brexit he added, “all we are asking for from the Government is clarity on what Brexit will mean for our industry. Building cars in the UK with the Pound lower in value against foreign countries is generally good for us as most of our components come from the UK.”

Asked about the recent reports of Apple’s future involvement with McLaren he said as far as they were concerned there was substance in these rumours and said, “we are not for sale – we remain fiercely independent.”

McLaren also remain adamant that Ron Dennis is not stepping down from F1 and he remains contracted as Chairman and Chief Executive of the McLaren Technology Group.

On the road with the McLaren 570GT

Unveiled at this year’s Geneva Motor Show was McLaren’s 570GT model which is expected to become the brand’s best selling model accounting for around 40% of their total global sales.

But we are only talking about relatively small sales numbers. McLaren’s total vehicle production of all its models for global sales this year will be in the region of 3,000 coupes and 4,000 next year. So 40% equates to 1,200 units this year and 1,600 next year for global customers of which the UK will receive around 150 units a year so the 570GT will still offer McLaren’s ownership exclusivity.

This newest McLaren model is priced at £154,000 and is positioned in their Sports Series. It follows a common McLaren design theme being a two door, two seater carbon-fibre, mid-engined sports coupe powered by their own Ricardo built 3.8-litre, V8, twin-turbo petrol engine and seven-speed dual clutch sequential manual and full auto mode automatic transmission with rear wheel drive. For the 570GT it is tuned to produce 570hp and 600Nm of torque.   Top speed is 204mph with zero to 62mph taking just 3.4-seconds.

McLaren Automotive Limited sees the 570GT with its Grand Tourer design features and higher specification appealing to a new generation of customers who will find it financially ‘obtainable’ over the more conventional competitor coupe models from Audi, Jaguar, Mercedes-Benz , Porsche and shortly Honda with their new NSX. Although the 570GT has a higher specification, with improved comfort and a softer ride than its hard-core stablemates its Grand Tourer role does not really conflict with its aptitude to be a track day coupe when, or if, required.

The 570GT shares its carbon-fibre MonoCell chassis and tub with the 540C coupe and 570S coupe as members of their Sports Series. For the first time McLaren use ‘superformed’ aluminium body panels allowing for a more complex design they say. It maintains the McLaren sculptured front end leading to the side dihedral pivoting passenger doors. 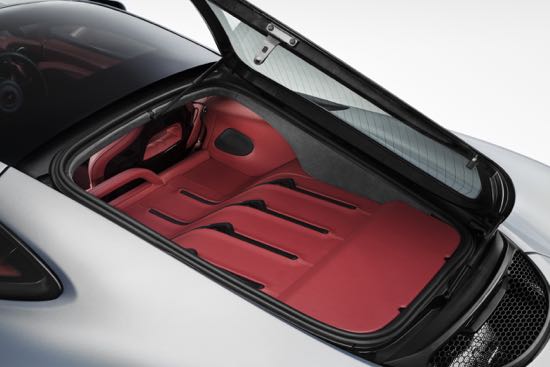 It has a longer and wider cabin and a side hinged glass hatch which allows access to an additional 220-litres of luggage space on the leather-lined touring deck over the engine. Under the front bonnet is a luggage bin with another150-litres of storage space, all part of the new Grand Tourer more user friendly practicality.

Not so practical is entry and exiting through the dihedral doors. With its low roofline and the wide sills of the carbonfibre tub, it is not elegant to get your backside over the sill and down onto the seat before getting your legs into the car and the same athleticism is required to get out of it. Entry and exiting calls into question the Grand Tourer role of the new model. An Audi R8 V10 Plus 610hp quattro is much more practical, faster and cheaper by over £20k. 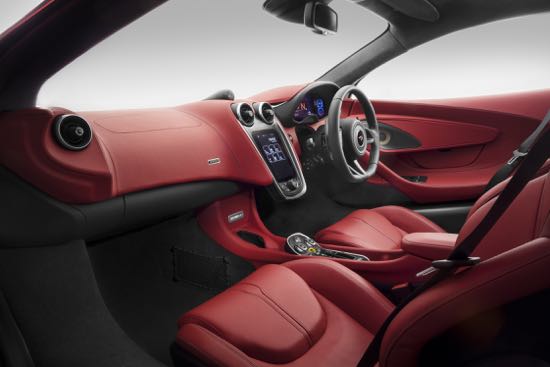 Once inside the 570GT have sculptural sports seats, fascia panel and door trim upholstered in high quality leather and the fit and finish looks good. The slim-line seats are more comfortable in the GT but after a few hours they still feel too firm so again the high mileage journey might be a trip too far.

Headroom once inside is good even for us six-footers but I found the leg and arm length dimensions on the short side. The controls are well placed and have a racing car theme to them. The digital display in front of the driver records speed, selected gear ratios, fuel and temperature gauges, trip computer information and chassis and engine modes. 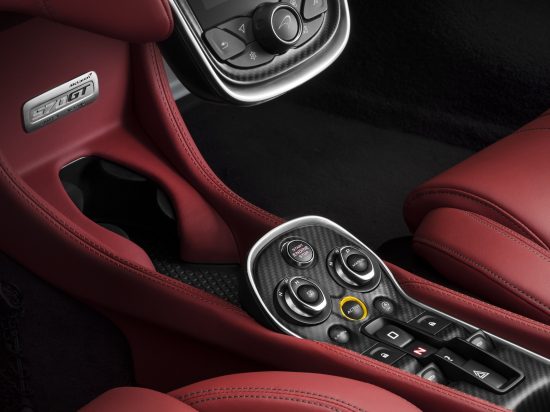 The lower centre console houses two rotary controls – one governs the chassis, steering and suspension settings for Normal, Sport and Track modes and the other has the same selections for the engine and transmission performance. There are also buttons to select Drive, Reverse and Launch control.

The seven-speed twin clutch gearbox has fully automatic or sequential manual modes which are operated by the steering column mounted twin paddles.

The 570GT has slightly softer suspension with adaptive dampers and the Normal setting felt the most user-friendly being relatively compliant on smoother motorway surfaces. The Sport setting firms up the ride considerably and more impacts were felt through the suspension and rigid carbon-fibre tub. The handling in whatever setting remained beautifully balanced and precise. The steering at higher speeds on winding roads I found slow acting and I would have preferred a sharper and faster steering rack.

The 570GT’s Grand Tourer specification also includes a quieter exhaust system so to some extent the ‘theatre’ soundtrack of this high performance machine was lost.   When talking about performance the official figures say it all. With a top speed of 204mph, zero to 62mph taking a mere 3.4-secponds is all we need to know. However the 3.8-littre, V8 twin-turbo petrol engine, although docile and compliant at low speeds, thrives on revs producing 570hp at 7,500rpm with 600Nm of torque available between 5,000 and 6,000rpm.

If you want driving fun or outright performance you need to see 4,000rpm at least on the rev counter, below that the response can feel lazy.   The Audi R8 V10 Plus non-turbo engine I prefer because it feels that extra bit more muscular for acceleration from low to mid range speeds where away from track days most of us spend our driving time. 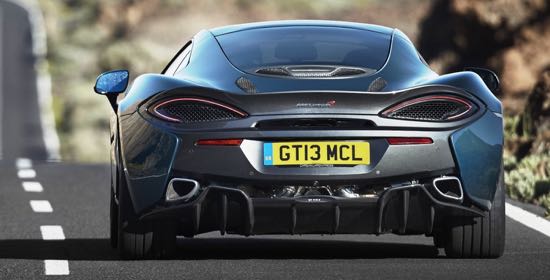 For McLaren stepping into the Grand Tourer arena with a roomier, higher spec and slightly more affordable car is an important step and a pathway for expanding their customer base outside the hardcore purists – the mainstay of the brand until now.

Whether it can be classed as a Grand Tourer is open for discussion.

Against: Lift up/out pivoting doors compromise entry and exit to the interior, lacks a ‘theatre’ exhaust soundtrack, slow steering rack, not as everyday user-friendly as the cheaper/faster Audi R8 V10 Plus.