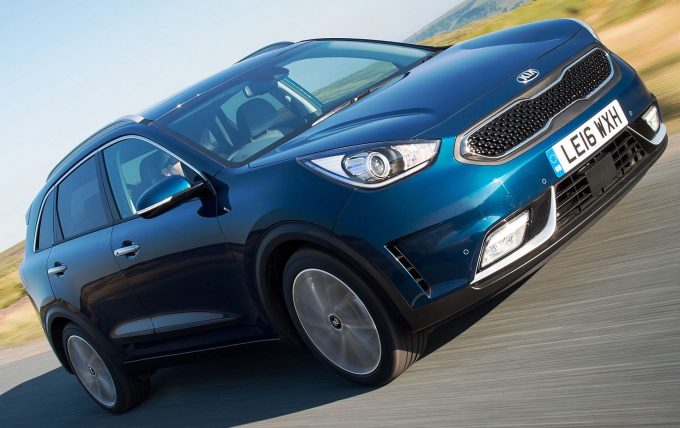 Kia is coming of age with its new Niro petrol electric hybrid Crossover.

It’s already produced an electric car into its previous petrol and diesel line up but as global manufacturers are forced by legislation to constantly reduce the emissions of their passenger vehicles both by model and for their entire ranges overall, more and more cars are being offered with some form of electric only power or hybrid technology.

Kia has pledged to reduce the average CO2 emissions of their range by 25% before 2020. Their new Niro petrol/electric hybrid sits between their Cee’d C-segment family hatch and estates and the high selling Sportage SUV.

It can best be described as a ‘crossover’ similar in size to the Nissan Qashqai with a petrol engine electric motor hybrid drivetrain similar to that of the Toyota Prius.

The Niro with its five doors, plump body, plastic wheelarch cladding and roof rails looks like a pseudo SUV but it is strictly front wheel drive so in real terms it’s a bulky looking and roomy five seater estate. It has been specifically designed to be a hybrid vehicle with no petrol, diesel or 4WD versions to come.

It is a product of Kia’s California and South Korean design studios and you have to accept that these will be its two biggest markets. Kia is reported to expect to sell around 2,500 Niros in the UK in a full year but that will significantly increase when the lower emission, lower taxed plug-in petrol/electric hybrid versions arrive early next year and should benefit from the Government’s plug-in vehicle grant of £2,500. PHEVs as they are known are popular with company car users because of their even lower Benefit-in-Kind taxation costs.

For now the new Niro is available priced from £21,295 through four trim and equipment levels up to £26,995. All have the same 1.6-litre GDI direct injection non-turbo 104bhp petrol engine working in tandem with a 32kW (43bhp) electric motor giving a total power output of 139bhp and 265Nm of torque.

The lithium-ion polymer battery pack is positioned alongside the petrol tank under the rear seats. Drive to the front wheels is through a six-speed dual-clutch automatic gearbox rather than the more commonly available continuously variable (CVT) systems. The gearbox incorporates a Manual Sports mode to allow for keener driving but unfortunately it doesn’t have gear-shift paddles on the steering column.

The spec levels need to be considered carefully as they determine not only the purchase price but fuel economy, CO2 emissions and the Benefit-in-Kind tax rates as well. Spec levels ‘1’ and ‘2’ have CO2 emissions of 88g/km with an official 74.3mpg figure which means no VED road tax charge for any year of ownership and BIK company car tax is 15%. Spec level ‘3’ and ‘First Edition’ models, due to their larger wheels and heavier weight, officially return 64.2mpg and have CO2 emissions of 101g/km so VED is £0 for the First Year rate and then £20 for Year Two onwards and BIK tax goes up to 17%. As for performance figures all versions have a top speed of 101mph and zero to 60mph takes 11.1-seconds.

Unlike the quirkily styled Toyota Prius the Kia Niro could be mistaken for a petrol powered ‘soft’ SUV, but it isn’t, it is just a muscular looking crossover with a high roof, curvy styling lines with the Kia ‘tiger-nose’ grille and high up headlights up front. At the rear is the full height and wide tailgate with a high level spoiler for good measure. 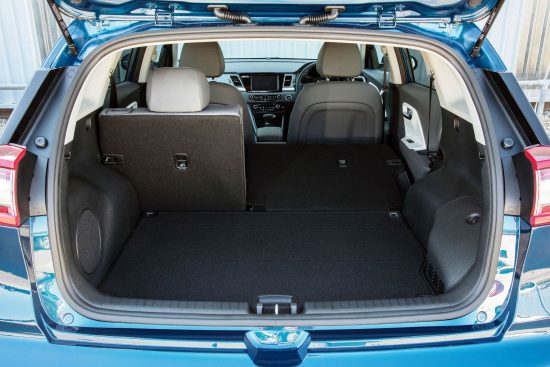 Access into the 421-litre boot is easy with virtually no rear lip to load items over. With the 60/40 split rear seats folded completely flat there is a user-friendly 1,425-litres of load space. With its long 2,700mm wheelbase and ample width of 1,805mm the rear seats are roomy with enough legroom for adults.

Up front the seats are wide and comfortable and the elevated seating position gives good visibility although the front quarter pillars do create blind spots at road junctions. The plastic trim is textured which gives a nice clean appearance and depending on the grade there are high-gloss black or white inserts in the steering wheel, dashboard and door panels. 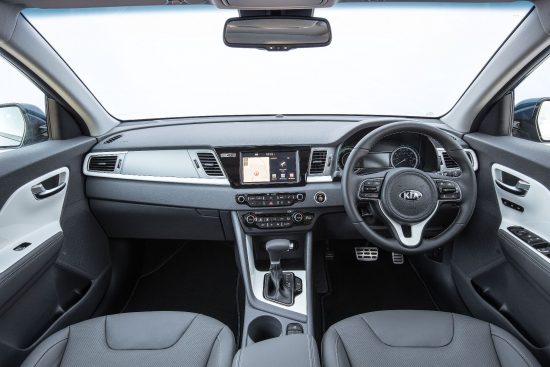 The seats are upholstered with artificial leather on the top spec versions or cloth for the more basic variants. It all looks well put together with clear instrumentation and well positioned switches. The usual rev counter is replaced by a power usage meter showing Charge, Eco or Power modes.

All but the base ‘1’ grade have leather covered steering wheel and gear shift lever and a seven or eight inch easy to use touchscreen navigation system. 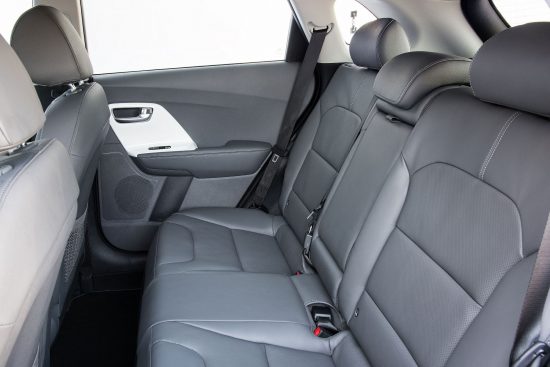 The 1.6-litre, four cylinder non-turbo petrol engine works more or less most of the time in tandem with the electric motor. The power units are more about efficiency than power.

The combined power output is 139bhp with 265Nm of torque available from standstill in first gear. The electric motor can operate on its own from standstill for short distances before the petrol engine starts up. The electric motor will also run on its own at a very gentle pace, say in-town’ nose to tail driving or when descending slopes or during braking during the overrun phase.

The brake energy recovery system recoups power into the battery during braking or deceleration but it is a mild form of ‘power harvesting’ as other hybrids or PHEVs harvest power more strongly and in some cases have adjustable harvesting strength where the most aggressive setting virtually means very little braking is needed slowing down in traffic or going down hills.

That said the battery on my test drive Niro rarely dropped below 50% full which left me feeling the electric motor could do more work as I found the petrol engine cut in too soon after start up and travelling at low in-town speeds when EV propulsion would have been more effective.

Officially this top spec Niro, costing £26,995, has an official average fuel economy of 64.2mpg with CO2 emissions of 101g/km. In reality the best fuel consumption my test car achieved was 55.4mpg when used for local driving over country roads with plenty of opportunity for downhill charging or when braking for corners.

On a 200-mile motorway journey the worst economy figure was 48.1mpg so 70mph cruising isn’t the most efficient form of use and again a bit more involvement from the electric motor with battery showing at least 50% charged might have helped better the mpg figure. Overall the vehicle finished up at 52.4mpg, still good for a vehicle of this size with a 1.6-litre petrol engine as its main power source. 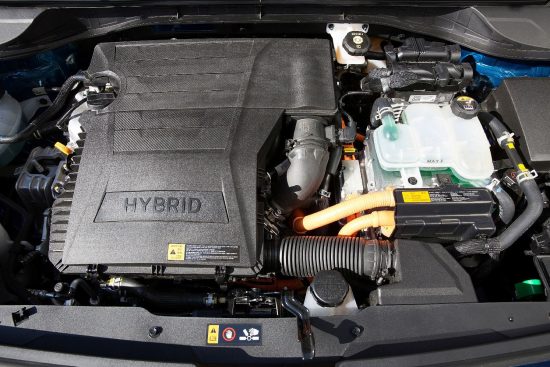 The engine and electric motor worked well in harmony with a smooth shift between modes, the auto box provided seamless but slow gearchanges better than a CVT continuously variable type gearbox but not as sharp or fast as a conventional dual clutch auto with petrol or diesel engines. Only under hard acceleration did the petrol engine begin to sound stressed.

Tyre noise intrusion with the 18-inch wheels fitted to my test vehicle was high and cruising at 70mph the noise drowned out the sound of the engine. I’m told that the ride comfort is better with the smaller 16-inch wheels. Generally the ride was comfortable but harsher road surfaces and potholes found the suspension unable to cushion impacts jarring into the cabin. The body control didn’t feel especially sharp with bodyroll evident during even modest cornering speeds. I rather suspect the handling is set up for the main US and Korean/Asian markets where motoring is done at a more sedate pace. Also a feature of its design roots was the annoying foot operated parking brake and the numerous annoying warning chimes and prompts. 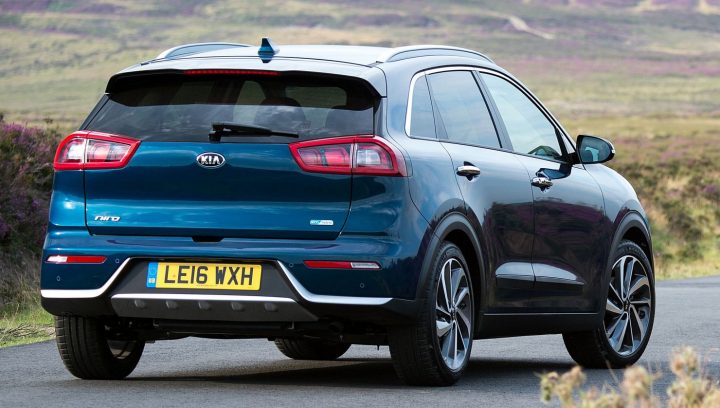 Kia Niro is an interesting vehicle; good on space, equipment levels and low emissions. It is only ever going to be a vehicle with petrol/electric hybrid or plug-in hybrid power sources and it would have more appeal for more people in Europe if there was a diesel engine option.

Against: Top spec models with larger wheels have a higher level of CO2 emissions so higher road and company car tax costs, very harsh ride at times with the larger wheels, electric motor could offer more support to the petrol engine judging by the low use of battery power.