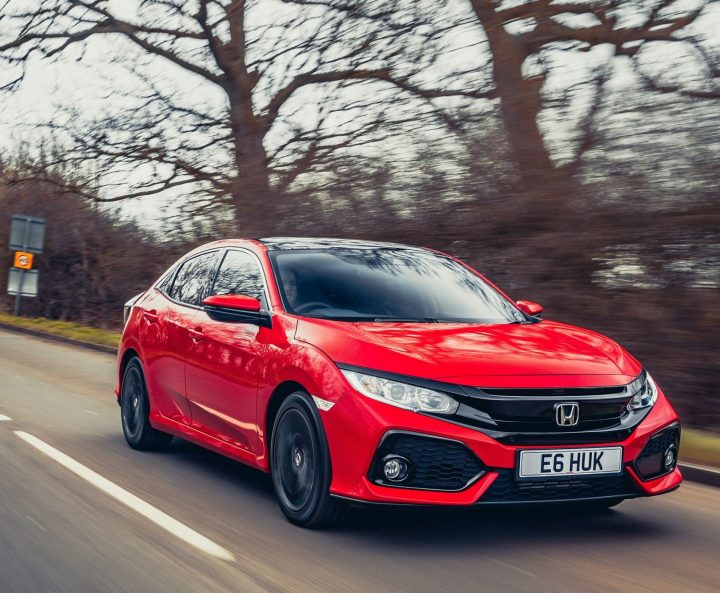 The UK market has been the largest for Honda sales in Europe accounting for over a third of their 100,000 new cars sold in the EU and Civic has been an icon, writes David Miles.

But the World changes, sales fluctuate, the public seems to want SUVs not conventional hatchbacks or saloons, electrification and hybrid are fashionable words and, yes Brexit has put spokes in many wheels.

So Honda will close its Swindon Plant in 2021, some 32 years after production started there, with the loss of 3,500 of direct and possibly thousands of more indirect jobs, and move production of the next generation of ‘electrified’ Civics back to Japan.

The current Civic Hatchback and Type R models will be the last British built Honda passenger cars for the foreseeable future unless they can be encouraged to change their minds once Brexit is sorted or hopefully the sale of new cars Worldwide quickly picks-up. 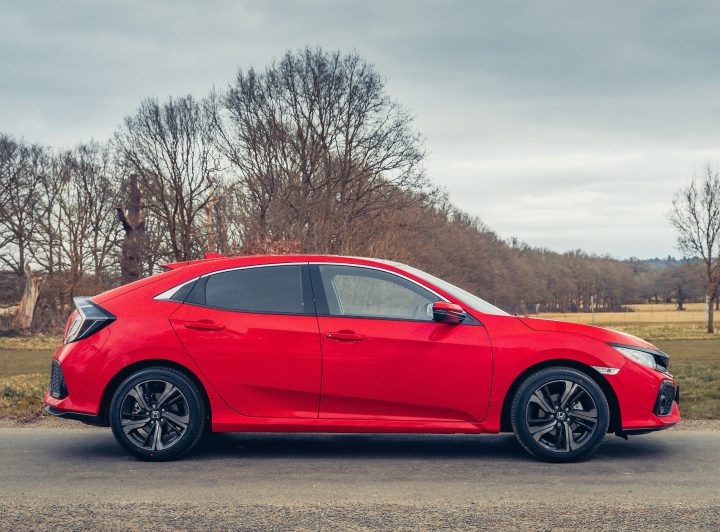 There is a comprehensive line-up of specification levels depending on the engine choice and these are S, SE, SR, Sport Line, EX, Sport, Sport+ and Prestige. Over and above these core Civic Hatchback models are the high performance 2.0-litre VTEC 320hpType R and Type R GT versions priced from £31,525 and £33,525 respectively.

With no estate car variants available for the 10thgeneration Civic range, Honda introduced towards the end of last year the four door Civic Saloon range priced from £19,600 to £27,850. This lesser-selling line-up only has SE, SR and EX spec levels and only the 1.0-litre VTEC petrol and 1.6 i-DTEC turbodiesel engine options.

Although current sales fads favour SUVs and Crossover models of all sizes there is still a demand for mid-sized family hatchbacks, saloons and estates. The competition for the Honda Civic is strong as it competes against such models as the Ford Focus, VW Golf, Vauxhall Astra, Peugeot 308, SEAT Leon, Skoda Octavia, Kia Ceed, Hyundai i30, and if you want to move more upmarket then the Audi A3, BMW 1 Series and Mercedes A-Class are contenders in this sector.

What the latest Civic offers is a more striking exterior edgy design; very sporty, long low and wide with sharp styling lines, wide wheel arches and its coupe style side silhouette.  The steeply raked tailgate gives access to a wide boot providing 478-litres of conventional boot space but fold down the 60/40 split rear seats and this goes up to 1,245-litres. 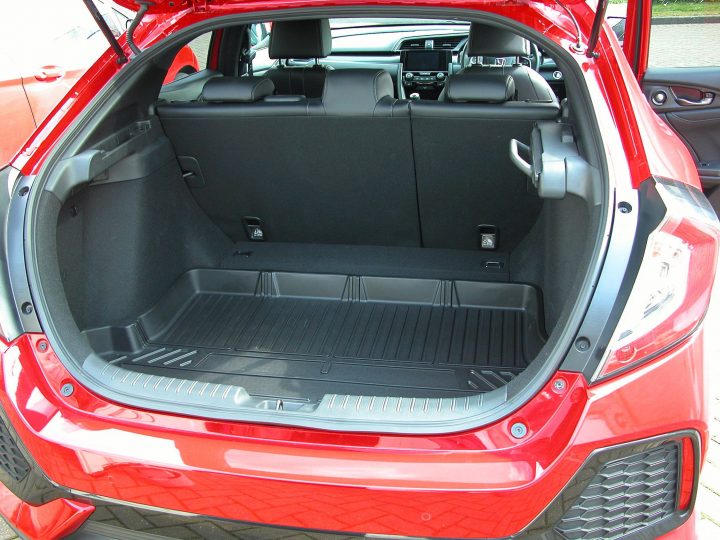 But it has two design drawbacks, the load floor is not completely flat and the steep rake of the tailgate limits carrying tall items, boxes etc, towards the rear of the boot space.

With is lighting bar spoiler positioned across the lower third of the tailgate window rear visibility is not great and neither is rear quarter visibility due to the steeply sloping rear coupe style rear roof section. 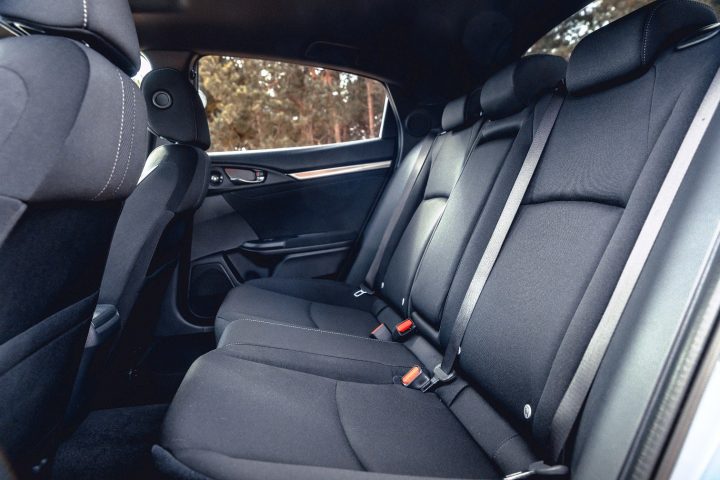 Whilst rear seat legroom is acceptable, headroom certainly is not for adults even though the front and rear seats are positioned low in the bodyshell. As a six-footer I also found headroom through the front doors limited as well. 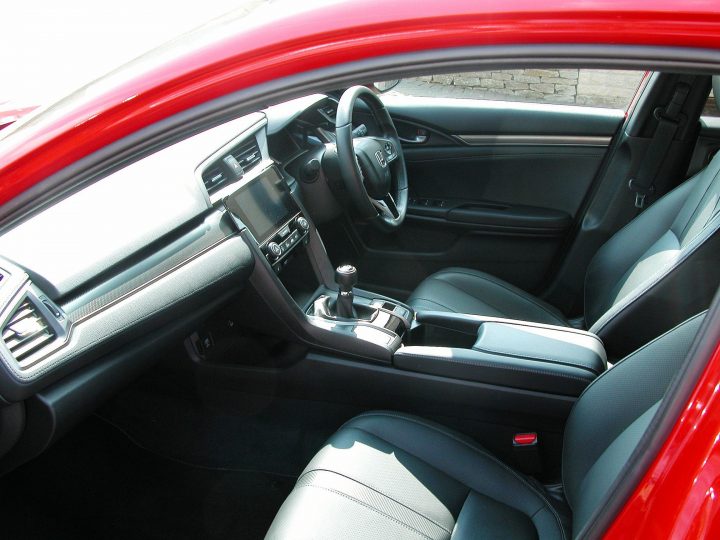 But once in the driving seat all the controls, gearlever and steering wheel came to hand very well and the low seat position made me feel part of the car in keeping with its exterior sports styling attitude. 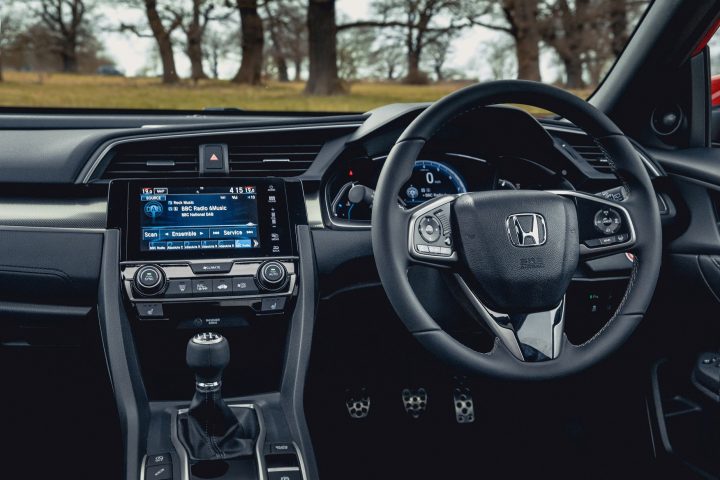 The major disappointment was the 7.0-inch centrally positioned touchscreen. It looks an aftermarket fitment, not very integrated into what is a very modern, clean-line fascia panel. Annoyingly some of the air and heating distribution controls are integrated within the touchscreen which is not user friendly.  Fortunately adjusting the temperature can be done via a conventional knob.  The sound system volume has to be adjusted by a steering wheel mounted button or via the touchscreen, again not user-friendly.

I couldn’t honestly say the interior quality of the Civic is class-leading, it’s no more than OK, it has areas of cheap looking, scratchy plastic trim all adding to the list of compromises which include limited rear seat headroom and an old-fashioned touchscreen system.

My test drive model was the Civic 1.0 VTEC Turbo EX five-door Hatchback, priced at £24,330. With the demise of diesel car sales and the 1.5-litre petrol only available in a small number of Sport or Prestige equipment levels, the 1.0-litre petrol engine will be the most popular choice and the mid-range EX spec level looks to be the better value spec level.

It’s a well equipped package all wrapped up in a distinctive, you could say aggressive, sports exterior styling parcel.  Certainly people either like or dislike its exterior looks, if a bland appearance is your choice of motor the Civic is not for you.

This latest generation Civic  bodyshell is claimed to have a 52% increase in torsional stiffness than the last generation and its handling felt taught, agile  and well balanced  with plenty of front end cornering grip  and very good feedback through the well-weighted steering.  However even on the Comfort setting the suspension errs towards the firm side and the noise intrusion into the cabin from the tyres was high. 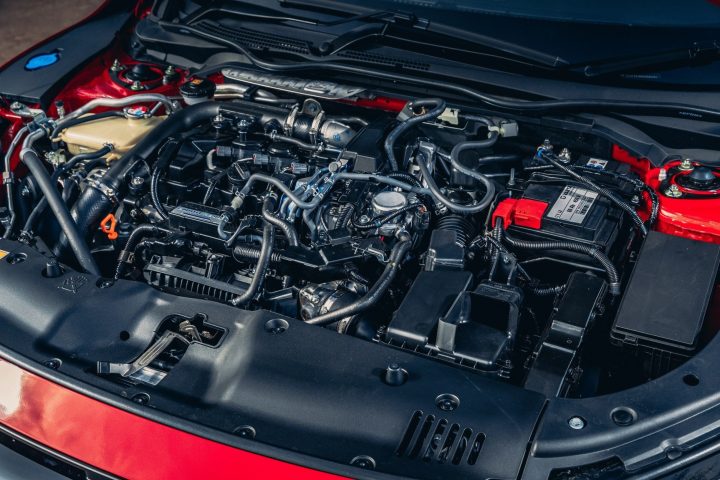 The new 1.0-litre triple cylinder turbocharged engine uses variable valve timing technology so it has the usual Honda free-revving nature but it is red-lined at a relatively low 5,500rpm. It was quite easy to hit the rev limiter in second gear from low speeds such as overtaking slow moving traffic and you do need to use the 6-speed gearbox to get the best response from this engine.

This engine has a three-pot growl tone which is characterful but feels less refined than the Peugeot/Citroen 1.2-litre, 3-cylinder, 130hp PureTech turbo petrol unit.  The 6-speed manual gearbox had a short throw gearchange and was precise to use. There is also a £1,400 CVT auto transmission option available with is engine.

My manual gearbox test car had the new WLTP Combined Cycle fuel consumption figure of 45.6mpg and during my test drive week my overall real-life figure was 45.2mpg but over 47mpg was easily achieved on long runs.  With CO2 emissions of a low 110g/km First Year VED road tax costs £150 and then £145 Standard rate for year two onwards. Company car drivers will pay 26% Benefit-in-Kind tax and insurance is Group 15E. Warranty is 3-years/90,000-miles. 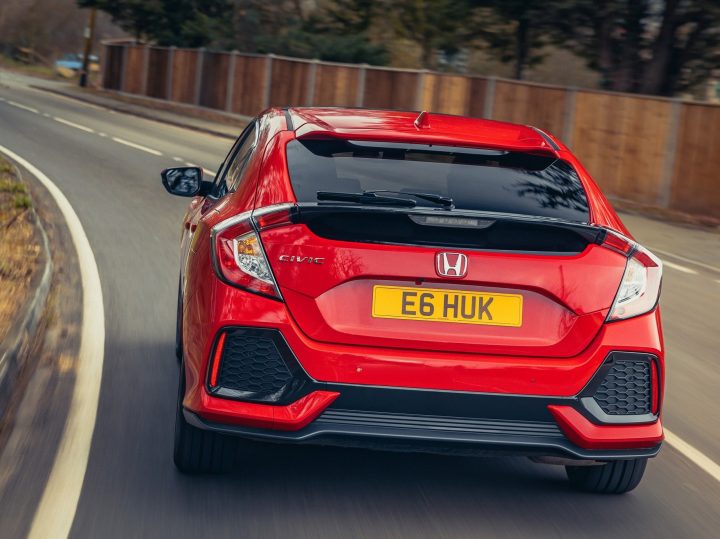 Look upon the latest and last British built Honda Civic Hatchback range as an alternative choice in the mid-sized family car sector due to its sportier edgier exterior styling. It has some advantages in some areas over the competition and it’s good to drive, but also some disadvantages or shall we say quirks such as the aged touchscreen system.