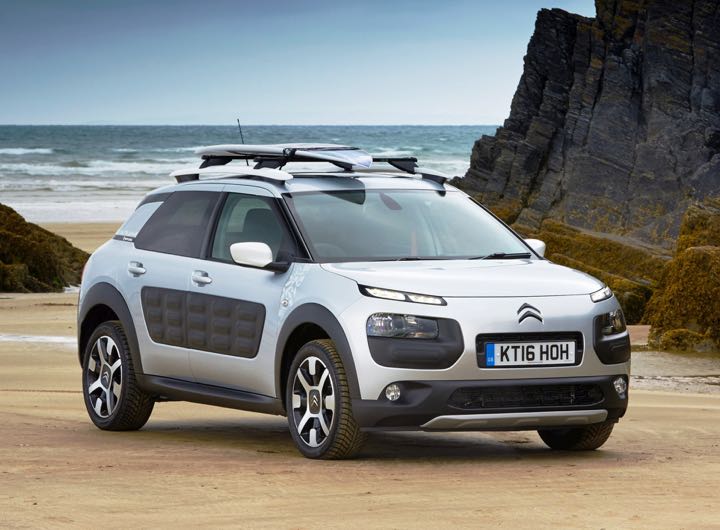 One of the major issues for the French PSA Group is differentiating their three mainstream brands, Citroen, Peugeot and DS, says David Miles.

Citroen are changing their position according to Linda Jackson, the brand’s chief executive   is reported as saying at the C3 international media launch that “we’re now in the process of reconstructing an iconic brand and the C3 is the start.”

So how do we see the brands differentiating? Well it seems Citroen will be offering ‘outside the box designs’ such as the C4 Cactus and new C3 and sleek MPVs like the new Picasso family, Peugeot will make a move upmarket with new SUVs high on their agenda – we already have the 2008, the all-new 3008 will soon be here followed by the 5008 later next year and DS will continue as the design led high-end premium brand.

What’s this got to do with their oddball Citroen C4 Cactus ‘crossover’ range first launched in the UK in 2014? Well the sales success, over 11,000 UK buyers last year and over 10,000 customers in 10 months so far this year, the Cactus has a proven design-led alternative way forward for the brand. The C4 Cactus range is chunky in style with a blunt front, high bonnet, air-blister side protection mouldings and plastic wheelarch and side sill guards plus a line-up of the award winning PureTech and BlueHDi PSA Group’s latest engines. The new C3 follows some of those C4 looks.

But the latest reincarnation of the brand with quirky designs or innovative engineering isn’t new for Citroen. Remember the Citroen Traction Avant, the two-cylinder 2CV dubbed the ‘tin snail’ or the futuristically styled DS, the Mehari off-road styled buggy, plus the Ami, Dyane, Visa, AX, BX, CX, XM or Saxo, some good, some not, but all different from other manufacturer’s model ranges of the same era.

So here we are today, the very different Citroen C4 Cactus which has been on sale since 2014 spearheading the design of new C3 which goes on sale at the end of this year. Today it is the Cactus Rip Curl we are commenting on, described by Citroen as a unique and fun crossover.   The C4 Cactus range has Touch, Feel, Flair, Rip Curl, W and Flair specification levels but personalisation options are numerous. Depending on the spec level chosen there is a choice of 1.2-litre PureTech non turbo and turbocharged 75, 82 and 110hp three-cylinder petrol engines and 1.6-litre BlueHDi 100hp four cylinder turbodiesel units. Prices start from a very attractive £12,990 and rise up to a hefty £20,495.

My test C4 Cactus was the Rip Curl version with the 110hp PureTech petrol engine priced at £18,840. An 110hp turbodiesel Rip Curl is also available with a turbodiesel engine. Both have a manual transmission and both versions are the only Cactus models to have PSA Group’s Grip Control enhanced front wheel drive on-demand traction system. This provides five selectable driving modes – Standard, Sand, Off Road, Snow and ESP Off which deactivates the stability control programme.

The Rip Curl variant was born out of collaboration between Citroen and Rip Curl the legendary brand from the world of surfing. The theory is the Rip Curl models offer even more radical design and adventurous use.

The Rip Curl follows the standard C4 Cactus design of a crossover combining the design of a five door family hatchback from the C-sector with an elevated stance of an SUV. This soft-offroader status is enhanced by plastic protection mouldings around the wheelarches, side sills and the Airbump blister pack panels fitted to the side doors. 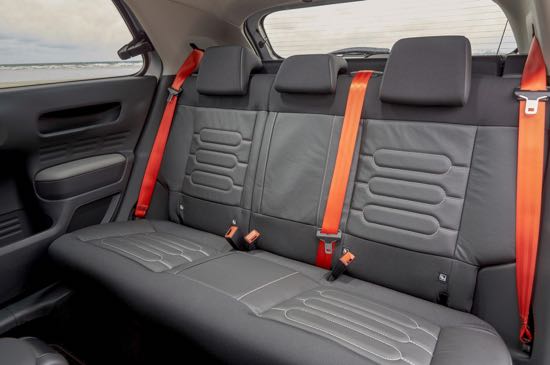 Inside the colour orange is a main styling detail change from other versions. Orange (right) denotes ‘energy’ it says, something surfers no doubt need. The orange is contained to the seat belts, floor mat stitching and loudspeaker surrounds.   Grey upholstery is standard but there is the option of part leather at £695. 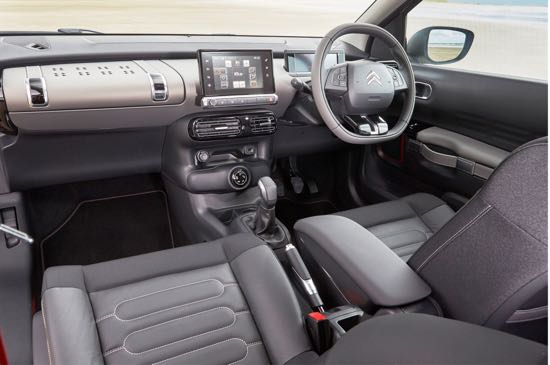 Centrally positioned in the high level fascia panel is a 7-inch touchscren system which operates the radio, sat-nav, heating and ventilation system and the computer readouts and vehicle settings. It is another example from the PSA Group brands, and others, of how annoying it can be to have to delve into the touchscreen programmes just to alter the in-car temperature or fan speed or adjust the radio channel. It isn’t user-friendly and to my mind it isn’t safe for the driver to be taking their eyes off the road to make these adjustments. Other notable Cactus design quirks include the retro style strap door pulls and the digital speedometer positioned in an elongated box on top of the fascia panel in front of the driver. 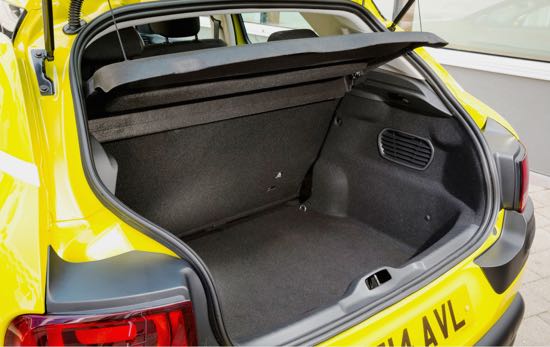 The Cactus is roomy with big comfortable seats and a useful sized boot of 358-litres with the rear seats up and 1,170-litres with them folded away. The only issue is the low boot floor and a high rear sill which means heavy items need to be lifted over that and down into the boot.

Coupled with a soft-ish suspension set-up the big seats provide a lounge style travelling experience. Yes the road holding is on the loose side with a bit of sway and body roll but it harks back to Citroen’s roots of comfy travel. Unfortunately the suspension, although soft, doesn’t cushion-out the impacts and bumps suffered by hitting potholes or on poor broken road surfaces. The course tread tyres used for the Grip Control function also create a significant amount of road noise which penetrates into the cabin.

The joy of the Cactus Rip Curl model I tried, apart from the advantages of the Grip Control function, was the 1.2-litre, three cylinder PureTech turbocharged petrol engine. This family of engines has won numerous awards for their fuel efficiency and in particular he turbo versions for their performance. The compact unit has that keynote audible three-cylinder thrum or soundtrack which is quite pleasing and it adds ‘character’ to the driving experience.

Mated to a five speed manual gearbox acceleration is quite ‘punchy’ from low revs. The power output is 110hp but it is the high 205Nm of torque delivered from 1,500rpm, that is better than diesel territory as far as engine response goes from low speeds. It will induce torque-steer at times which needs to be watched, most noticeably accelerating hard out of low speed bends which can be an ‘interesting’ characteristic. 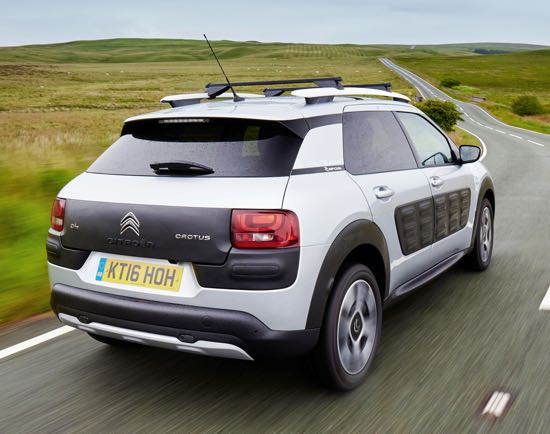 You might dismiss the Rip Curl graphics as gimmicky but not the performance of the engine or the avant-garde styling the C4 Cactus offers. It is not a car for everyone but if you don’t want motoring in an also-ran modern day family hatchback go for the C4 Cactus Rip Curl, it’ll make you smile at the low running costs and extra Grip Control even if you are not a surfer.

Against: This is the only Cactus model to be offered with Grip Control in the entire range, roly-poly ride at times, road noise intrusion, garish exterior body graphics, high rear sill to load heavy items over, too many basic driving functions operated via the touchscreen.