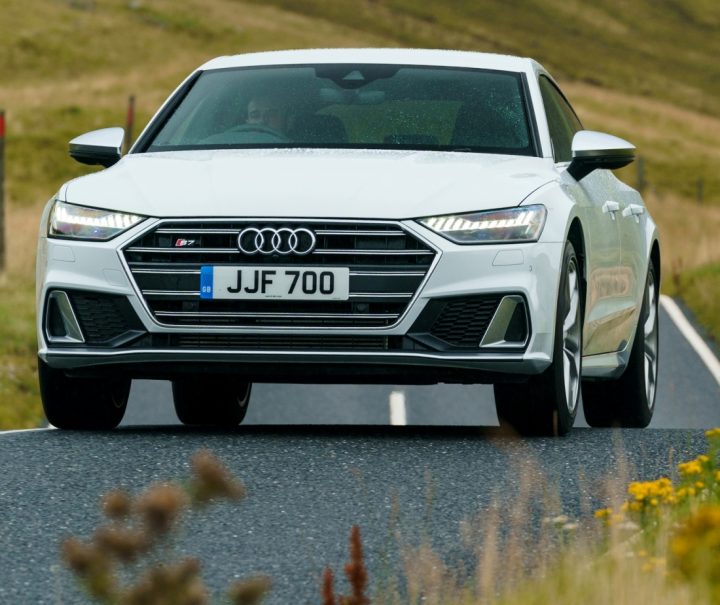 Currently the S7 model is the top of the range version in Audi’s new A7 Sportback range but order books are open for an even more powerful – and faster RS7 variant arriving early next year, writes David Miles.

The Sportback is the five door coupe version of the Audi A6 luxury Saloon and Avant estate family.

A7 Sportback prices start from £48,175 with the S7 priced from £68,680 and the mighty RS7 expected to be around £90k. Prices are wide ranging as are engine and specification choices despite the A7/S7/RS7 being niche models within the now huge and ever expanding Audi line-up.

Depending on the engine choice the A7 has Sport, S line, Black Edition and Vorsprung spec levels, S7 has its own spec level plus the higher Vorsprung option and RS7 is its own sports spec level. 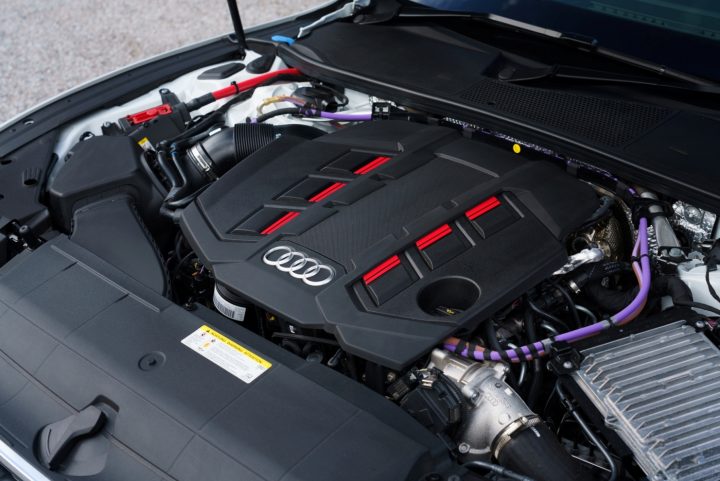 The S7 has a 3.0 V6 349hp TDI unit which replaces the previous 4.0-litre TFSI V8 petrol 450hp engine, a surprising move from petrol to diesel given the mood of the marketplace but whilst its down on power it’s high on that all important torque.

For those that want muscular petrol performance, but at a very steep price, the forthcoming RS7  4.0-litre TFSI V8 twin-turbo petrol unit produces 600hp. All engines use a 48V mild-hybrid system to help with fuel and emissions efficiency whilst transmissions throughout range are Tiptronic automatics and quattro traction is prevalent throughout the line-up.

My step into the Audi world of the A7 Sportback was actually with the S7 variant priced at £68,680 with its new 3.0-litre, V6 TDI turbodiesel engine with numerous catalytic converter elements, particulate filters and exhaust gas recirculation to minimise things we don’t like to talk about. Power output is 349hp but it is the huge 700Nm of torque available from 2,500rpm that allows the S7 Sportback to ‘talk the torque’ in terms of immense driveability refinement and brute acceleration force if needed. The previous V8 petrol S7 had more power but less torque at 550Nm. 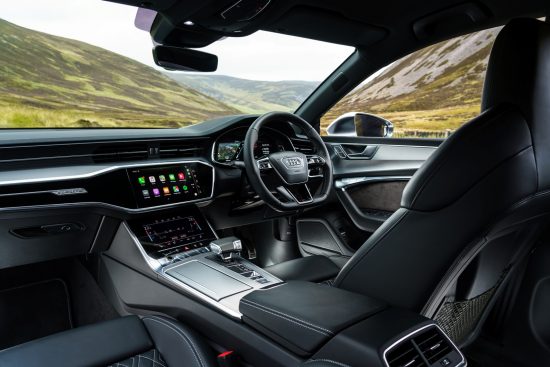 That’s the figures out of the way apart from saying the price of the S7 Sportback coupe is around £6,000 to £8,000 more than the equivalently powered and equipped S6 Saloon and Avant estate versions – good looking style comes at a significantly higher price in the World of Audi.

The other surprising issue is that this time around S7 versions come with a diesel engine which given the move away from diesel powered cars is notable. The reality is that the person buying the long-legged high speed S7 Sportback is likely to be covering long distances, it is a Grand Tourer Coupe and high mileages mean fuel economy is an important benefit over high powered fuel thirsty petrol engines. If its petrol-power an owner wants then the RS7 V8 TFSI 600hp version is coming along but with an expected huge price penalty.

Whichever power unit suffices from 2.0 petrol and diesels to V6 diesels or V8 petrols, all versions have ‘style’ as the common factor. The elongated coupe body with its four passenger doors plus the rear tailgate oozes kerb appeal. The S spec also includes bespoke styled front and rear bumpers, side skirts, the suspension has S damper control and HD Matrix LED headlights and dynamic rear indicators. 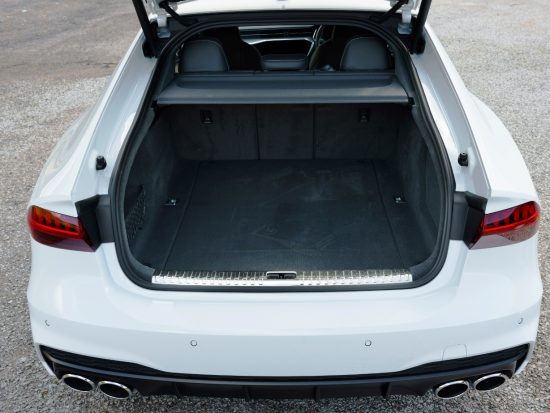 The rear quad exhaust tailpipes and rear diffuser add to its very fine sports image but would I be nit-picking to say why it doesn’t have a tailgate wash/wipe system. Yes the parking sensors and rear view camera etc are fine for parking and reversing but driving forwards with no means of clearing a wet tailgate window isn’t its finest point.

I also have my doubts as to the point of ordering the S7 Sportback with the Vorsprung spec level which has the same power and performance but costs a whopping £86,680. I just cannot see how 21-inch wheels rather than the 20-inch standard ones, blacked out grille, front air dam, door mirrors and window trims, lazer headlights, air suspension, panoramic glass sunroof and an upgraded sound system with sportier front seats, all very nice, are really worth £18,000 more? Still fortunately we just about maintain freedom of choice when buying a new car so I guess it’s a choice to be taken or not.

Back to the S7 standard spec which of course has a beautifully crafted interior, sports seats, leather upholstery, MMI Navigation with its 10.1 and 8.6-inch screens, Virtual Cockpit display and a larger secondary screen beneath the touchscreen which takes care of the heating, ventilation, air-con, heated front seats etc.  Beneath that are the gear selector Drive Select and electronic parking brake controls. There is the usual Audi flat-bottomed multi-function 3-spoke leather steering wheel and heated and electrically adjustable with memory function. 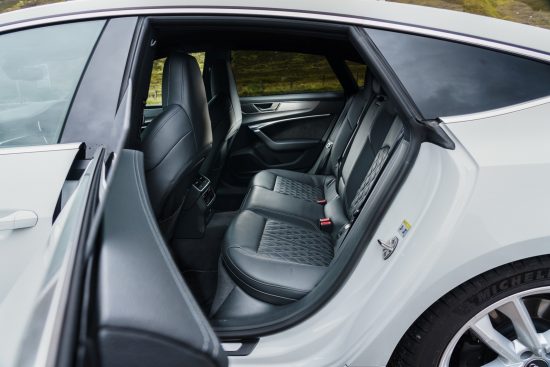 There are three seats behind but due to their sports shape two adult passengers would be more accurate and legroom is just about ok for adults.  The useful boot space extends with the rear seats folded to accommodate your designer Louis Vuitton luggage on a grand driving cruise to the sunny South of Europe.

Diesel power the new 3.0-litre engine may be but its V6 configuration means it is a very refined unit and I’ve already written it oozes torque at a huge 700Nm which makes driving very easy, smooth but impressively fast when needed. The 48-volt mild-hybrid system charges the lithium-ion battery and up to 8kW can be regenerated under braking and that allows for 40-seconds engine free coasting at cruising speeds before the engine fires up again.

Mated with an 8-speed Tiptonic torque converter automatic gearbox with its long-legged 7/8thgear ratios the power delivery is spot-on whether its slow in-traffic travel or open road cruising. Matched with the Audi quattro all wheel drive system grip is plentiful with up to 70% of the power going to the front wheels and up to 85% to the rear wheels when needed. It keeps the big car firmly planted during acceleration, fast cornering and the added grip was very much needed during the recent heavy rainfalls during motorway travel.

The Audi S7 is very much a niche model in the A7’s niche sector but for affluent executives it’s very much a ‘drivers car’ and a practical one with its up-market hatchback design. It’s a better and more refined option to the bulky, expensive and huge SUVs filling outside lanes of motorways during commuter travel times.

Against: Pricey with options, diesel power will not be to everybody’s choice,  lacks the agility of a BMW 6 Series Gran Turismo, no tailgate wash/wipe, ungenerous VW Group warranty.