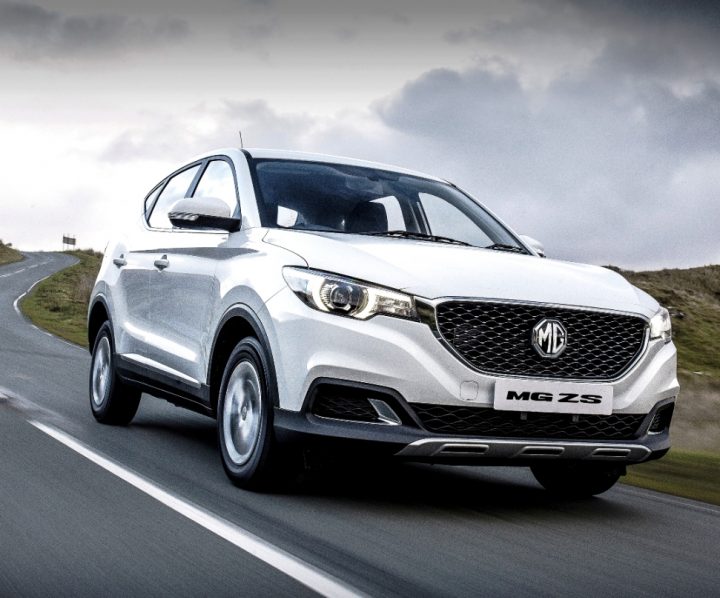 After secret development testing in Wales, MG Motor UK this week launched their compact ZS SUV with a seven-year warranty.

With SUV sales of all sizes booming the new MG ZS is the right vehicle at the right time for MG Motor UK. Matthew Cheyne, Head of Sales and Marketing told the media this week the arrival of the MG ZS is the ‘start of a new era’.

He said, this year MG Motor UK  is on target to sell around a total 4,500 units of our MG3 supermini sized hatchbacks and our larger MG GS Crossover/SUV  current models. “The arrival of the ZS will double our sales next year to 9,000 units and we should achieve 10,000 sales in 2019”.

The MG ZS he added will sell in a segment of the new car market we haven’t been in before.  Because of its affordable pricing with high specification included and the seven year/80,000-mile warranty it will appeal to customers who perhaps have only bought a used car before.

Customers could make it their main or second car but equally it will appeal to families, singles, couples and some business and fleet users.  We are seeing young buyers moving to our brand all the time. The average age used to be 65-plus and now it is around 45-years of age.

Whatever their age MG Motor UK will be pleased to see more customer in a diminishing new car market. The company at the media launch placed a lot of emphasis on the new car’s    manufacturer’s long transferable warranty giving customers total peace of mind, its high specification versus more costly competitor models which include the Renault Captur, Nissan Juke, Mazda CX3, Ford EcoSport and Peugeot 2008 and the fact that it has been reengineered specifically for UK roads in terms of handling, steering response through three steering modes as well as ride comfort.

The ZS is a global car built by MG’s current owner SAIC Motor in China but some of the design and engineering work as been carried out at their UK headquarters at the former MG Rover facility at Longbridge, Birmingham.

Testing was carried out in such varying climates as Sweden, Spain, Austria and Wales. The British MG brand’s history goes back to 1924.

There is the choice of two petrol engines, MG’s own 1.5-litre, four cylinder 106hp normally aspirated petrol unit with a five speed manual gearbox and a new 1.0-litre, three cylinder turbocharged 111hp GDI direct injection petrol unit from their partnership with General Motors. This is only available with a six-speed automatic gearbox. All models are two wheel drive.

Matthew Cheyne  said he expects 60% of UK customers to choose the 1.0-litre engine, 55% will choose the Exclusive spec level and retail customers will account for 90% of UK registrations although there is an opportunity in this fast growing market sector to attract more fleet and business user-chooser customers.  He expects 60 to 70% of sales to go to conquest customers new to the emerging brand.

He added, “I expect the single best selling model will be the 1.0T GDI Exclusive priced at £17,495 with around 80% of buyers expected to use our 0% hire purchase offer.   For this top selling version it is £199 a month for five years with a deposit of £3,550.  With this offer the customer actually owns the car at the end of the finance agreement rather than with a PCP scheme where it would be handed back at the end of the agreement”.

Although classed as a compact SUV the MG ZS is in fact larger in its sector than most of its competitors.  With its overall length of 4,314mm its 179mm longer, 44mm wider and 46mm taller than the sector sales leading Nissan Juke and it has 94-litres more boot space than the Juke at 448-litres which increases to 1,375-litres with the rear seat backs folded down. With a long wheelbase of 2,585mm it provides noticeably more rear seat legroom than most of its competitors which is a real bonus for family users.

Exterior styling debuts the new MG family face which will be used on future models coming from the growing brand.  Up front there is a sports style grille with a prominently mounted MG badge in the centre of it flanked by sleek headlight units each with 23 LEDs. 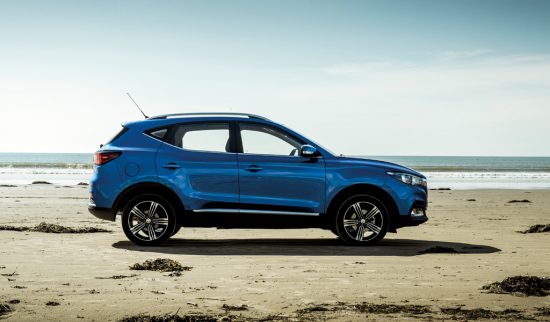 The side profile has a shoulder line extending over the front wheelarches and along the doors and below that at sculptured styling lines for the doors. At the rear is a tailgate which offers good access to the boot with its height adjustable floor.

Inside MG have given the ZS a cockpit style front area with the controls and instruments logically placed.  The fascia panel is described as having 3D sculptured layers which breaks up the mass of dark soft-feel textured plastic trim. There are some areas of hard plastic used lower down in the interior particularly around the handbrake and gear lever reflecting its price but at least it will be durable.

MG says the ZS comes with most of the ‘extras’ as standard. It has an 8.0-inch touchscreen infotainment screen with DAB radio (on the Exclusive and Excite models), while Bluetooth hands-free and remote central locking is available across the range. Cruise control is also included, while air conditioning comes as standard on Excite and Exclusive models, and Satellite Navigation and a rear camera are standard on the Exclusive variant. 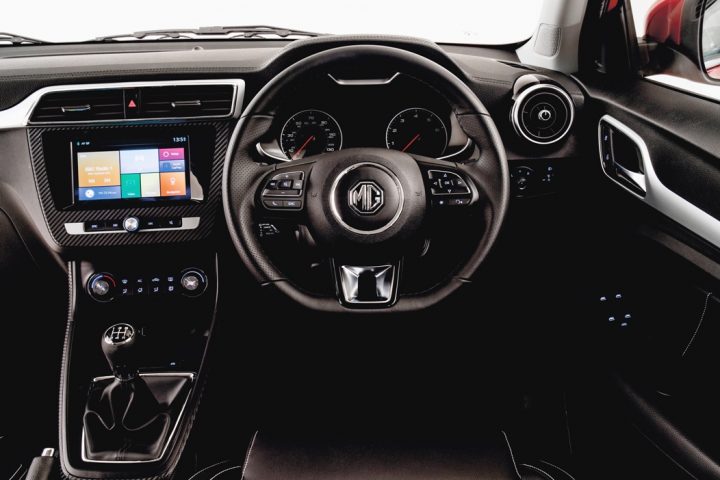 Apple CarPlay is standard on Excite and Exclusive variants and it’s the safer way to use an iPhone in the car. It takes the things you want to do with your iPhone while driving and puts them on the car’s in-built display. This means users can get directions, make calls, send and receive messages and listen to music, all in a way that allows them to stay focused on the road.

Although well equipped the MG ZS misses out on such spec items found as standard or offered as options on other higher grade compact SUVs.  The missing items include Android Auto connectivity, Autonomous Braking, Blind Spot Monitoring, Lane Departure Warning and Hill Start Assist although they have not adversely affected the insurance group ratings which are 10E and 11E. Also missing is a reach adjustable steering column although it is adjustable for height.

When it comes to the choice of engines it’s going to be down to a customer’s budget.   To move from the 1.5-litre petrol engine to the 1.0-litre turbo unit will cost an extra £2,000 but that includes the latter being matched with an auto gearbox instead of the five speed unit used for the 1.5-litre engine.

Neither engines set new standards in terms of performance, fuel economy, low CO2 emissions but both form adequately. The 1.5-litre normally aspirated 106hp engine with 141Nm of torque at 4,500rpm and its five speed manual gearbox provides a modest top speed of 109mph with zero to 60mph taking 10.4-seconds.

The Combined Cycle fuel consumption is officially 49.6mpg and on my test drive around country lanes and a section of higher speed dual carriageway around the Silverstone area the real-life figure was 38.5mpg. The CO2 emissions are 129g/km so VED road tax is £160 First Year rate and then £140 Standard rate thereafter.

The fuel economy is not as good either with the official Combined Cycle figure of 44.9mpg and 33.9mpg during my test driving on the same route as before. This shows that despite having the boost of a turbocharger the three cylinder smaller capacity engine has to work harder. The CO2 emissions are much higher as well at 144g/km so VED First Year rate is more at £200 although the Standard rate is the same £140.

There isn’t much to choose between either engine in real-life use except the purchase cost. If you want a manual gearbox you have to order the 1.5 engine, if it’s an auto gearbox you want then it’s the 1.0 turbo unit.

The ride comfort and handling is more or less the same whichever engine a customer chooses.   MG’s UK development seems to have paid off with a compliant, supple and comfortable ride on most road surfaces and the suspension absorbs shocks from all but the worst potholes.

The steering with its selectable three modes works with the Urban setting making the steering lighter for in-town travel and parking, Normal is best for most circumstances and Dynamic adds more weight but that’s about it. None of the settings offer any varying degrees of feedback which is minimal.

Roadholding is generally good but at higher cornering speeds there is body-roll and the front end does squat considerably under hard braking. Most noticeable of all is the road noise intrusion on courser road surfaces.

Overall the new MG ZS compact SUV is a mixed bag. It has price, size, a long warranty and good specification as plus points and its so-so performance shouldn’t detract greatly from its ownership proposition. 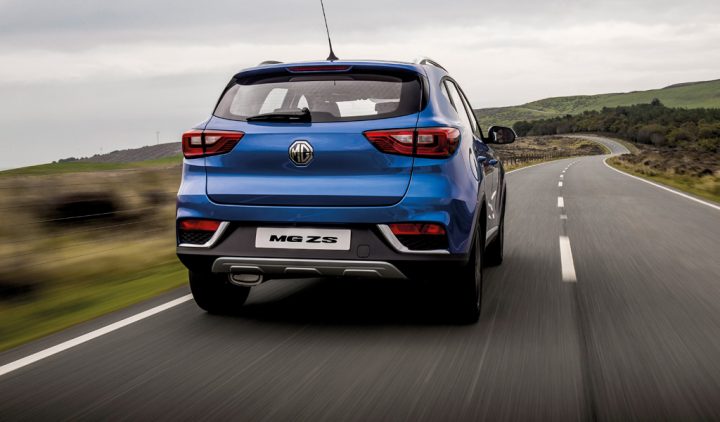 It is certainly the best modern day MG model the growing brand currently offers but it’s not overall the best compact SUV available today.  The 1.5 Excite variant at £13,995 to my mind probably makes the most financial sense for those customers wanting to get into a new compact SUV at a relatively low price and they still get the seven year warranty.

Against: Missing some important driving safety aids even as options, high running costs in terms of fuel economy and CO2 taxes, no manual gearbox option for the likely most popular 1.0T engine.