You are here: Home / Industry / Components / Living with augmented reality in your car

Augmented reality applications have been taken on board by the BMW Group.

Basemark, a leading software enterprise specializing in automotive software, implemented AR over-video application in a pioneering world first one of these and is now available in some of the latest BMW models. 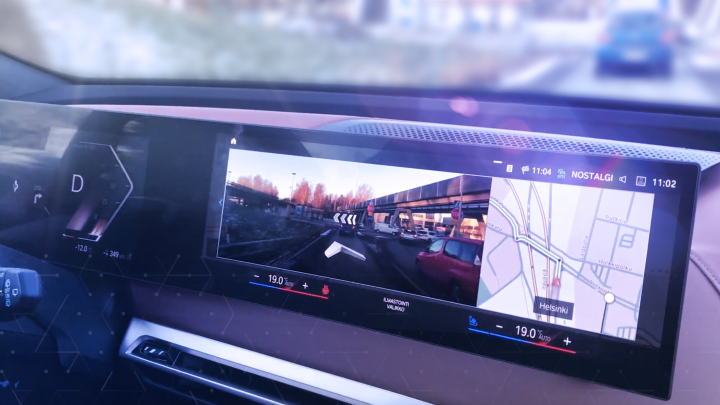 The work has resulted in cutting-edge AR applications for new electric BMW iX vehicles that use vehicle sensor data and computer vision functionality. These enable AR-enhanced information to be shown on the car’s Central Information Display while navigation is enabled.

Augmented reality-powered Central Information Displays help the driver with vehicle interaction and be more aware of their surroundings. For example, AR increases the ease, accuracy, and safety of navigation.

With AR, upcoming turning manoeuvres and lane recommendations are shown to the driver directly on the Central Information Display. The front-view camera automatically sends live footage to the curved touchscreen, where interactive arrows appear to show the driver exactly where they need to go. The map remains visible thanks to a split-screen functionality and drivers no longer need to interpret the image from the navigation map to the road in front of them.

AR features also help to improve the parking experience in densely packed urban environments. AR can also help to guide the driver towards available parking vacancies, inform about parking limitations and rates, and augment the driver’s spatial awareness during parking.

“We are delighted that Basemark’s leading automotive software know-how resulted in AR implementations that fulfilled the concept of the BMW Group and asset requirements with great technical feasibility and high performance.