You are here: Home / Motorsport / 2020 / Legendary John Price – an appreciation

The rallying world lost one of its bright stars on Tuesday evening 21 April  as the man who was instantly recognised to so many by just his initials, ‘JP’, namely John Price, lost a long a hard fought battle with his illness that had seen him become increasingly unwell over the past few years,  writes Roger Gale.

He entered this world in 1944, and left it gently, surrounded by his family in Herefordshire. John Price Rallying, his modest garage in Wormbridge that he opened in 1975 not extravagant in appearance, yet one that became as famed as John was himself  for the impressively prepared Renault 5 Turbo and Metro 6R4 rallycars that emerged from the place.

‘JP’ drove both to great success, as indeed he did many other cars since beginning his motorsport on the race track with a Mini Cooper S in 1965, and three years later took to the rally stages at the wheel of the first of several Ford Escorts, his win resulting in racings loss but rallyings gain.

He was known throughout this country and also in Europe, forging a special connection with the Renault factory, as well as becoming a top driver and preparation expert with the MG Metro 6R4 from 1986, providing these machines to a great number of other drivers, and his team overseeing their competition campaigns.

Among the cars that John drove were those that have become part of rallyings ‘exotica’, the somewhat humble Ford, Simca, and BMW added to by a number of potent Porsche 911’s that he was driving from 1975, and perhaps the most evocative, several A110 Alpine-Renaults.

His remarkable career at the wheel encompassed over eight hundred rallies, and an equally remarkable tally of a record breaking twelve National Tarmacadam Championships.

His co-drivers were many, including a long successful association with Mike Bowen during the many years that John’s cars were supported by Zenith Motor Sport of Swansea, and several seasons with Derrick Davies.  Mike Sones also sat in as did Hywel Thomas for several Internationals, including the Monte Carlo Rally, to name but a few of those that sat with him.

All added to John’s success, but his greatest and closest co-driver was his wife Caroline, who guided ‘JP’ in the hot seat for over one hundred events, and was also at his side in every other way.

Those that knew John were aware rallying was his life, and it is hardly believable that ‘JP’ has crossed that final finishing line.

His son Stephen, who has maintained the standards of ‘The Boss’ at Wormbridge and will continue so doing, to his loving wife Caroline, and to Catherine, Kevin and Stephanie, as a Father, Husband, Grandfather and Great Grandfather, JP will be greatly missed by  all. We extend our condolences and salute his achievements and the many memories that will never be forgotten.

Due to current Corona virus conditions Johns funeral will of necessity be a closed service for close family only, but there will be a memorial occasion to celebrate his life later in the year.  As ‘JP’ himself often said “ Give ‘em hell boy!” …and John certainly gave his rallying opponents – though friends –  more than a fair share of that as he sped away from them.

Adventure and Mystery on the 1983 Monte Carlo Rally 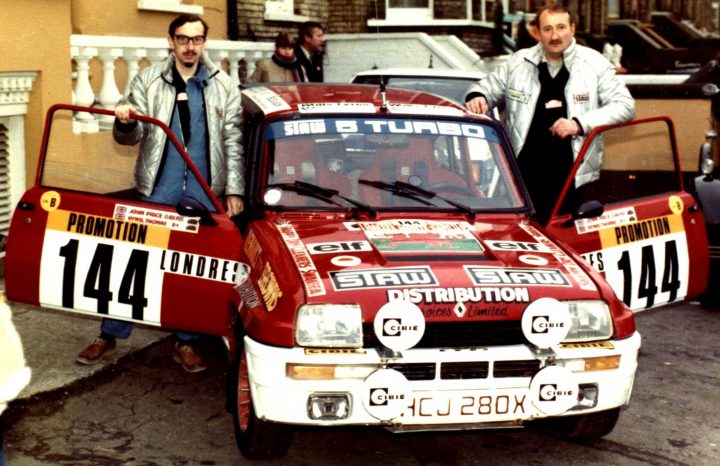 During the 1983 Monte Carlo Rally, John and Hywel Thomas crashed their Renault 5 Turbo at night while speeding across the flying finish of an alpine stage, writes Ken Davies.

The car then left the road and dropped down a bank, destroying the suspension and some lower panel work. After the accident, a helpful but over-enthusiastic French spectator kindly offered to drive John back down the mountain but after a few frantic corners, the hapless driver rolled his Renault 5 road car spectacularly, completely destroying it but fortunately injuring only his no-claims bonus!

John’s close friend Alun Morgan, who was driving a Rover SD1 Chase Car, was miles from the crash scene and when they did not arrive at the agreed service rendezvous – pre cell phone days and their two-way radios had proved ineffective in the mountains – he set off briskly and drove through the preceding three stages until he found them. It was daylight by this time, the roads were open as most marshals had left.

Alun then effected temporary repairs to the damaged rally car so it could be driven off the mountain stage to the nearest village and stored with a helpful garage owner. John and Hywel then got into the chase car, which was fitted with studded tyres, but later on the dry motorway, a front tyre blew at speed and the Rover careered wildly over the carriageway until Alun managed to bring it to a safe halt. John had escaped from three major incidents within a few hours physically unscathed!

On the last night of the rally, John and his disappointed team walked up the Col du Turini stage with its low walls, big drops, drunk spectators and few safe spectator points to watch the final 100 cars pass through. The following day Hywel Thomas and John flew back to the UK as Hywel had injured his back in the accident. John’s brother Denzil, Alun and Bob Jones went to the rally’s black-tie prize giving ceremony before driving the SD1 home later that weekend.

On Friday, the damaged Renault Turbo was collected by the service van and trailer but to this day, they simply do not know how they ever found that small, obscure country garage again. Bob Fowden, Derrick Davies and Steve Lloyd then drove non-stop to Hereford and dropped the car at John’s Wormbridge garage and from there to Swansea.

Between the south of France and Swansea they had stopped only for fuel, ferry and at Maidstone to buy 2 new trailer tyres. They athletically changed drivers whilst on the move with just two of the three passengers driving and the third watching the map and keeping the drivers awake. They were physically wrecked and slept for days!

Mysteriously, after the accident there was a bullet found amongst the damaged parts stripped from the wrecked rally car and John had always wondered if someone had shot-out his tyre, causing them to crash. This has still never been explained thirty-seven years later, but the bullet was genuine, and it always made a good story – perhaps even a worthy title for a new Agatha Christie type who-done-it?