The Audi Q8 raises the game for the company as the new flagship in its sporting range and it’s also a real challenger to rivals from Range Rover, Mercedes-Benz, BMW and Maserati, as well as Bentley.

The new five-seater-only Q8 has a coupe-styled five-door body with quattro drive and 48v mild-hybrid 286ps 3.0TDi and eight-speed Tiptronic automatic. Other powertrains will follow.

The S-Line model opening the range costs from £65,040 while for £18,000 more you can buy the Vorsprung version in the near future, both are built in Audi’s Bratislava plant. 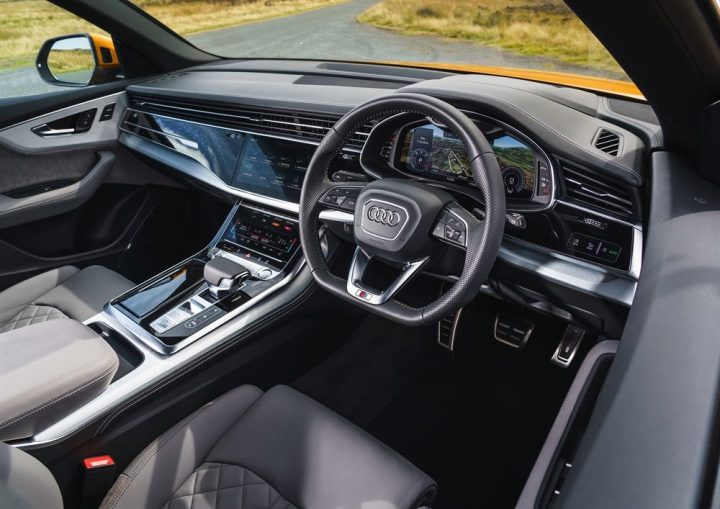 Owners can select Tour, City Assist and Trailer Packs to personalise their model.

The new Q8 is shorter but wider than the sister Q7 model but it has a nominal 605 litres rising to 1,755 litres of luggage space and with its extensive use of aluminium weighs 2,145kgs.

Audi Q8 product manager Martin Baker said the arrival of the new model builds on the success of the stable-mate Q7 which went to 6,366 UK drivers last year.

“We believe most of the Q8 sales will come from conquest business and other brands which do not show such strong residual values as Audi has done in this premium sector,” he said.

Last year, Audi UK saw its market share rise to 6.9% and it is neck and neck with BMW, who are both just behind Mercedes-Benz, and with the Q8 its CAP Gold Book predicted residual value for the anticipated best selling 50 TDI S line will be 46.7% over the next three years.

Martin Baker said Audi UK expect the forthcoming 231ps diesel to take just 5% of Q8 registrations, the 340ps petrol double that percentage while the launch-engine 286ps diesel will capture 85% of orders and most will be specified with about £8-10,000 of options which will help keep up residual values close to half of original cost over three years.

“There is still a good market for diesel in the high mileage sector and where torque is needed for towing horseboxes or trailers of some sort,” he added.

While the S line will be the main seller, Audi UK has seen a larger number than anticipated for the £18,000 dearer Vorsprung, which adds about £20,000 of extra equipment if individually specified.

Audi designers really have done a good job of apparently shrinking the new model when viewed alongside its stablemate larger Q7 and without detracting from its on-road presence.

Lengthening the wheelbase while shortening overall size has resulted in a larger passenger compartment, particularly for the three rear-seat passengers and there’s still plenty of luggage space.

Inside there is the familiar eye-catching quality of trim and fit and all the major controls readily fall to hand and foot while the very latest touch screen and split-screen technology presents itself. While I am not a fan of having so much technology crammed into the displays they gave a clear representation of information.

Our S Line 286ps hybrid diesel packed a punch and delivered it smoothly over a wide power range with imperceptible changes through the eight-speed transmission. There are five drive-mode settings to optimise performance for conditions and they instantly change when the driver selects a setting.

The quiet and smooth powertrain only made itself heard under hard acceleration but there was constant muted road noise despite the fitting of double-glazed windows on the test car, which will be options in due course.

Our test route took in a number of narrow country lanes and village streets and this brought home the fact the Q8 is a smidgen under 2m wide so needs care when passing or parking. Its sensors and cameras, some of which are expensive options, really cover the blindspots but without them you need to be particularly vigilant. Having said that, it’s more maneuverable than the bigger Q7.

Some of that added handling improvement comes from four-wheel-steering, optional on S line and standard on Vorsprung versions, which cuts the turning circle by a metre while sharpening steering response through fast bends. 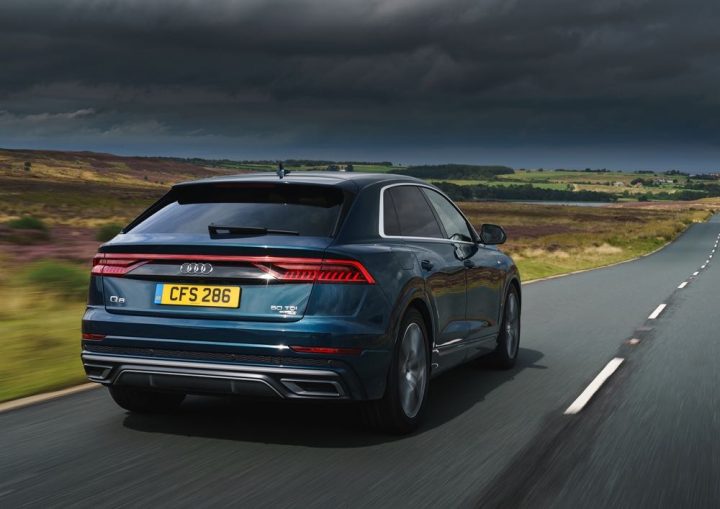 Overall and an 80miles test route we managed to achieve 33mpg, some way off the WLTP indicated 41.5mpg, but fairly representative of mixed roads and traffic.

Audi Q8 packs in the sophistication of the brand and delivers a very agile SUV for those needing just five seats.