You are here: Home / First Drives / Face off with new SEAT Leon SC 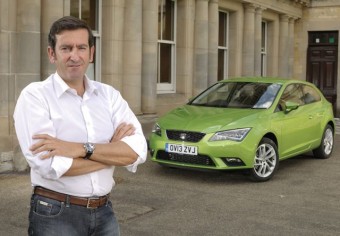 The Leon SC three-door is taking SEAT into new territory and it’s put a “ purposeful face” on where it wants to go, says the man behind this second new line of family cars.

Following the Leon five-door, the new shorter and more rounded SC has been designed from the outset to win over more private buyers to the Spanish brand, said Alejandra Mesonero-Romanos, Design Director SEAT (right).

“The Leon five-door is a very practical car for business and family use but we decided the three-door had to look faster, more dynamic,” he said. “It is the same as the five-door up to the A-pillar but the sweeping roof, longer doors and tapering body over slightly fatter rear wheel arches and a shorter wheelbase give it a different appearance.

“At the front end we have kept the Leon look from the five-door because it conveys an expression of someone who has a purpose, who knows where they are going and will get there with determination.

“When we set out to create the Leon our designers  were tasked with creating a wide variety of front ends and then as an exercise had to match up these concepts with actual human expressions and it worked very well.”

The design director added that he firmly believed the instant appeal of a car came about as a result of seeing the front end or face of the car which would convey a meaning to the observer and could be likened to the look of love between two people.

This “romance of design” is highly personal but explains why some buyers may be turned off a particular model whether or not they have had the previous generation of the car.

“We tend to judge people by first impressions, how they look to us after just a moment’s glance, and I think it is the same with cars,” said Alejandro.

This appearance is going to be a vital factor in selling the Leon SC to private buyers and user chooser business drivers, said SEAT Product Marketing Manager Jo Elliott.

“The SC looks quite different to the five-door and has a more sporting appearance which will have strong appeal to the drivers who do not need the additional doors for whatever reason.”

While the Leon SC retains the familiar powertrains and trim levels of the Leon five-door as an added incentive across the range of SE and FR versions, SEAT is giving away about £1,900 of LED front lights, navigation system and digital radio on cars ordered up to 30 September.

Jo added, “This technology pack shows the way we want to take the SEAT brand in future with affordable advanced equipment which will  please drivers and also enhance resale value of our cars because it is helping us get a £400 improvement on residual value over three years from CAP.” 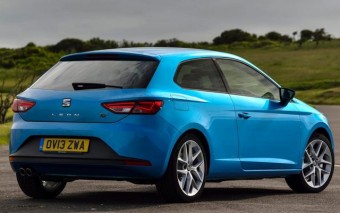 Early next year a third member will join them, the Leon ST. This sports touring estate will offer much more luggage room for the owners who need the space but still want a compact family vehicle which is not as bulky in appearance as an MPV. It will be a highlight of the Frankfurt motor show in September and the German market is now the biggest in Europe for SEAT, followed by Spain and the UK. 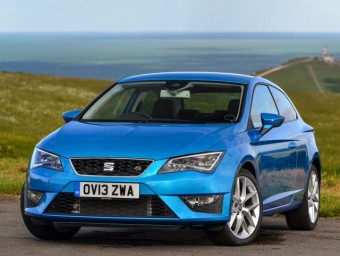 The three-door Leon SC is a visually striking addition to the line-up with its neat lines and flowing surfaces around the body.

Inside its stylish and there is very good access for two and it wasn’t too difficult to slip in the back seats either. The boot is reasonably large and easy to use as well. The 1.2 tested returned 41-44mpg and covered ground well with judicious use of the gearbox but the 1.4 was much livelier and easier to drive as a result, with only a marginally higher fuel consumption of 38-42mpg.

Both had good major and minor controls, visibility is good despite the coupe styling because it wraps around the upper part of the body and my only mild criticism was that road noise was noticeable on both because they were otherwise mechanically quiet until the 1.2 was pushed to its upper rev-limit when it sounded more strained.