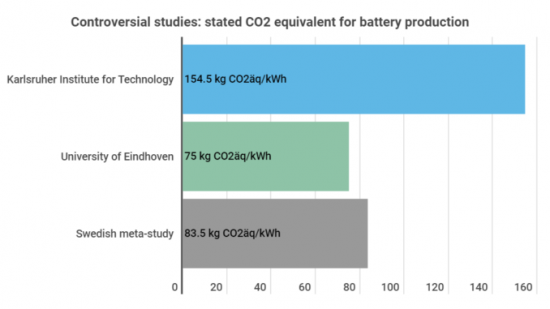 While more and more companies are focusing on electromobility in order to meet climate targets, the scientific community has by no means reached a consensus on what the propulsion system of the future will look like.

This is shown in a new infographic from Block-Builders.net (right).

The CO2 balance of an electric car looks much less attractive than that of a conventional combustion engine when taking into account the manufacturing process (above) and not just the fuel use.

For example, production of an electric car generates 16.8 tonnes of CO2 equivalents, compared to 8.4 tonnes for a modern car with a diesel engine. As the infographics show, if an electric vehicle is used for 12 years, almost 60% of the total emissions can be attributed to the production phase.

Depending on battery size and consumption, an electric car must be driven for up to 300,000 kilometres before its CO2 balance is more favourable than that of a modern diesel.

The Association of German Engineers (VDI) suggests that all forms of propulsion could be climate-friendly and that all product developments should be pursued in parallel. However, other scientists arrive at significantly different conclusions.

While German manufacturers such as Volkswagen are strongly pushing and prioritising electric mobility, a different trend can be observed in China. The Middle Kingdom is aiming for a 55% market share for electric cars with batteries, hydrogen vehicles and plug-in hybrids by 2035.

However, high-ranking politicians there remain more open to conventional vehicles: “We do not want to stall petrol vehicles, as is happening in some countries,” as they say.

The climate debate is a key challenge for the automotive market. However the data available could hardly be more divergent. According to the Karlsruhe Institute of Technology, the CO2 equivalent of producing batteries for electric vehicles is around 154.5 kg / kWh, while the University of Eindhoven comes up with a CO2 equivalent of around 75 kg / kWh.

Stock market participants seem to take a much less controversial view of the situation. As the infographics show, 53.9% of Americans expect Tesla to show the strongest share price increases over the next 5 years.

The US pioneer exclusively produces electric vehicles. 9.3%, on the other hand, are betting on the hydrogen stock Nikola to achieve the best performance.

“While statements from numerous corporate leaders as well as price developments on the stock exchange floor suggest that electric mobility is set to win the race for supremacy in the automotive sector,” argues Block-Builders analyst Raphael Lulay,

“Controversial study results show that this is far from set in stone. Car companies seem to be well advised to continue to pursue all propulsion systems equally”.