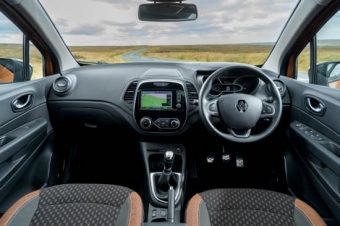 Facelifted front and back with enhancements to give a more premium feel to the interior will take Renault Captur into the 67-plate registrations with renewed opportunities.

The SUV is the best selling Renault in the UK and accounted for 30% of registrations for the brand with 25,841 finding buyers last year.

Sales are split roughly 50:50 between private and fleet and there is a slight bias towards the petrol engines, but this might increase if diesels continue to fall out of favour for tax and emissions reasons over the coming 12 months.

Renault’s automatic is favoured by 18% of Captur buyers, compared with 16% for the SUV sector as a whole and in the UK we tend to go for the upper trimmed models so the Dynamic and Dynamic S will take most.

In a brief first drive of Captur 90TCE Dynamique S Nav we managed 40.2mpg compared with 55.6mpg in the slightly lower specified Dynamique S with 116dCi engine but that is partly explained by five-speed gearbox on the petrol and a six-speed unit in the diesel, which had a more flexible nature and smoother ride for some rough country lanes we encountered.