You are here: Home / Roadtests / Weekend roadtests: Lifting the lids on two Volkswagens 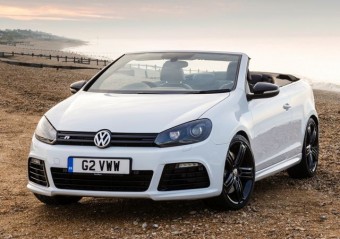 There is one feature you will not find on the options list for the 265ps latest Volkswagen Golf R Cabriolet DSG but which makes it highly desirable this summer, exclusivity, says Robin Roberts.

This sixth generation of the Golf convertible is the fastest accelerating and with the highest top speed despite being a shade less powerful than the previous 270ps Golf R and that’s because it is not held back by the additional weight of an all wheel drive transmission.

The new front wheel drive only Golf R Cabriolet is lighter and structurally stronger than its predecessor and this helps performance, economy, ride and handling.

This immediate, flowing and abundant power matched to the newest dual-clutch automatic transmission is a delight to experience with is responsiveness and smoothness and on a very brief test drive I managed to average about 29.4mpg.

What the figures do not tell you is how quiet and smooth riding is the new Golf R Cabriolet despite the sportier spring and damper rates. The platform is from the previous generation Golf hatchback not the current Modular Transverse Matrix but it is still perfectly acceptable when developed as a convertible.

With some soft-tops you get scuttle shake and obvious chassis twisting over bad roads but there’s non of this evident in the Golf R Cabriolet.

Having just front wheel drive also makes it very responsive to driver input in terms of steering and throttle response and combine these elements with the power characteristics and availability and you have a truly delightful car for a quick dash across country, and the twistier the roads, the better the journey.

There is very good room infront, more restricted space in the back and the boot is suitable for a weekend shop or soft-bags up to 250 litres. With the hood erect the visibility is restricted to the rear sides and over the tail but its good to front and sides. 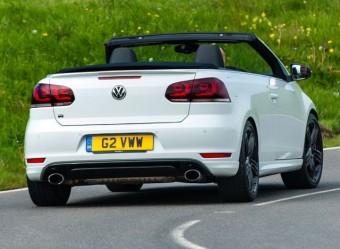 It is very well equipped as you might expect for £38,770 with cruise control, dual zone climate settings, on board multi-function computer, heated leather seats, powered windows and wind deflector, while outside the R Cabriolet is distinguished by its big wheels and tyres, unique body kit and gloss black detailing.

Volkswagen anticipate selling fewer than 100 Golf R Cabriolets in a year out of 4,500 with all the other powertrain options so it is going to be a rare site on our roads this summer and possibly a future classic as well.

Best part is it is a car to enjoy now as well as in the future and that is a rare thing to say.

Turn back the clock in Beetle Cabriolet but keep modern comforts 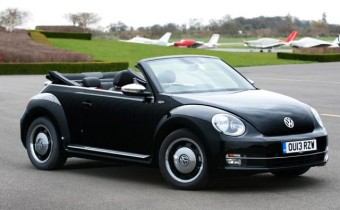 In time for Summer Volkswagen has wheeled out the Beetle Cabriolet range of retro styled two door rag-tops priced from £18,405 to £28,335, writes David Miles.

The Beetle Cabriolet models are an average £3,000 more costly than their Beetle Coupe counterparts.

The engine line-up mirrors that of the Beetle Coupe so all are direct-injection turbocharged four cylinder units. There are three petrol 1.2/1.4/2.0-litre units and two diesels of 1.6/2.0-litre capacities. There is the choice of manual and automatic transmissions depending on which engine is chosen.

There is the usual choice of trim levels – Beetle Cabriolet, Design and Sport but for its launch there is the added choice of a three special edition levels created to promote the retro design. These are the stylish 50s Edition, the cool 60s Edition and the elegant 70s Edition.

With the Cabriolet access to the rear seats is not great and the rear legroom is tight. Headroom is fine but rear seat passengers could feel claustrophobic with the roof raised. The electrically operated multi-layer fabric roof, which includes a glass rear window, can be folded down in 9.5 seconds with the car being driven at speeds of up to 31mph and it can be raised in 11.0 seconds.  A tonneau is provided to cover the roof when it’s folded down.  Unfortunately the roof does not disappear out of sight when folded down. Like most pram-type canvas roofs it sits above and behind the rear seat head-restraints so visibility is restricted.

The interior of the car with the roof up seemed well insulated from traffic noise and with the roof down there wasn’t too much wind buffeting.  There is a 225-litre boot and the rear retro style bench seat can be folded to increase load space up to 905-litres.  That is useful space for the ‘designer’ luggage for that top-down stylish, wind in the hair ‘cruising’ holiday.

The new Cabrio pioneers the use in the latest Beetle of a new multi-link rear suspension and the Coupe will adopt it soon. Handling and control functions are improved with the use of more expensive multi-link system that the cheaper torsion beam layout.

For most retail customers the 1.2-litre 103bhp turbocharged petrol engine I feel is the power unit of choice. It is free revving, responsive, smooth and cheaper to buy and run. It is available with the choice of manual and automatic gearboxes.

The 1.4-litre 158bhp turbo petrol engine will apparently be more popular though giving just that extra bit of acceleration performance but the fuel economy is not as good, the emissions are higher and there is no automatic gearbox option.  The 1.6 TDI, 103bhp diesel unit is an option for higher mileage drivers but the Beetle Cabriolet isn’t that sort of high-use car. The 2.0-litre, 208bhp TSI petrol and 138bhp TDI diesel units probably rule themselves out for most retail buyers because of high purchase costs which make these models hard to justify, after all the latest Beetle is about style rather than performance.

We did sample the new Beetle Cabriolet with the 1.4-litre TSI, 158bhp, 177lb ft of torque, turbocharged petrol unit with the standard fit six-speed manual gearbox carrying a price tag of £22,690  if the Design spec is chosen. However our test car had the launch special 50s Edition spec which pushed the price up to £24,895. 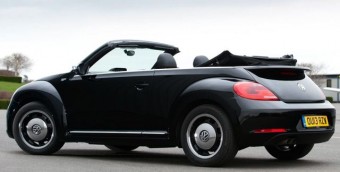 The interior of the Cabriolet is very retro in its styling reminding us we are in a Beetle and there is the option of various colour finishes for dashboard. The most popular Design spec level has cloth upholstery but with leather trim for the multi-function steering wheel and gear/brake levers. The bespoke specification rises as you climb the ladder of models which can be customised to fit your requirements, including a Fender sound system from the legendary electric guitar firm of the same name.

Despite our changeable weather where we go from floods to sunshine in a matter of days, the UK remains the second largest market in Europe after Germany for cabriolet/convertible sales. So there is proven demand for such niche models and the new smart retro soft-top Beetle does not disappoint for those car-lovers where style matters.