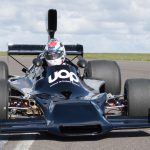 A £50,000 fund has been launched to create a permanent memorial to Welsh Formula 1 driver Tom Pryce in his hometown of Denbigh. Launched on what would have been Pryce’s 70th birthday last Tuesday,  the money will be used to erect a statue as a lasting memorial to the rising star who died in a tragic accident in the 1977 South African Grand Prix. The launch ties in with the build up to the … END_OF_DOCUMENT_TOKEN_TO_BE_REPLACED