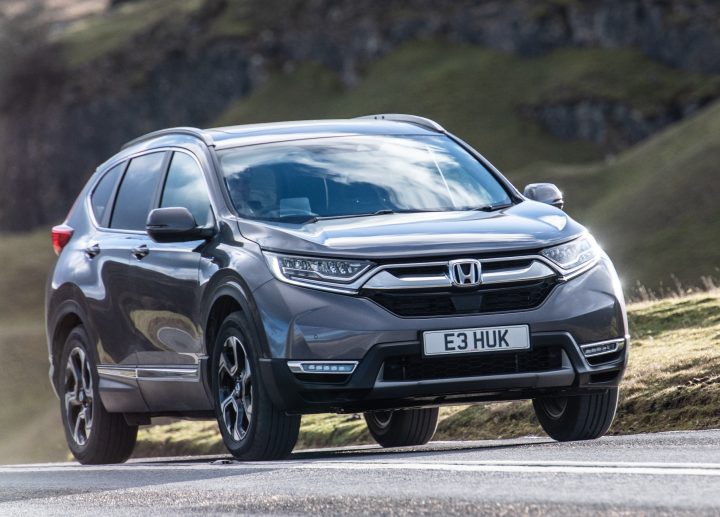 Billed by Honda as the world’s best selling SUV with over 9.0-million sales in 150 countries since the first generation model was launch in 1995, the latest generation range was launched towards the end of last year, writes David Miles.

However the new range had no diesel and no 2.0-litre VTEC petrol engine options and came only with their 1.5T VTEC 173hp manual gearbox or 193hp for the CVT auto turbo petrol units. There was also the choices of 2WD and 4WD (Honda uses the term AWD), plus five or seven seat models.

However in February this year the range was extended by the introduction of 2.0-litre 145hp petrol and 184hp electric motor Hybrid versions with standard fit eCVT auto gearbox. These versions are available with 2WD and 4WD options but only with five seat accommodation as the battery pack is located under the load area floor. 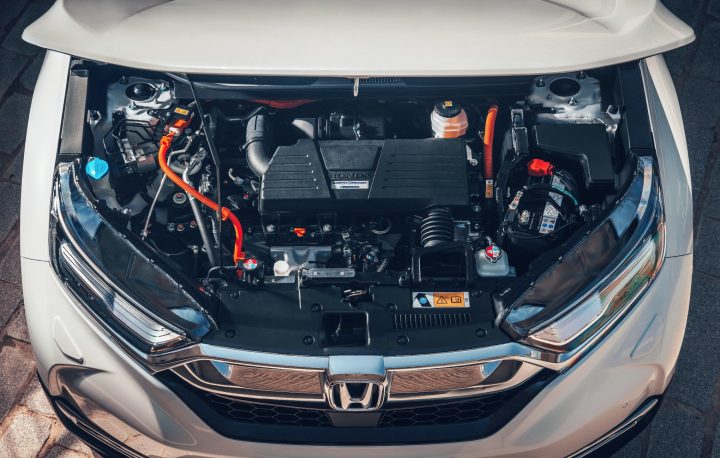 Spec levels for both petrol and the additional Hybrid models are S, SE, SR and EX.  Petrol models are priced from £25,995 to £36,455. Hybrid versions range from £29,155 to £37,305, notably the higher level of spec the closer the prices get between petrol and Hybrid models.

Expect Hybrid power to play a major role in all Honda’s models from now on as they announced at this month’s Geneva Motor Show that all their European model ranges will be electrified by 2025.  Electrified means, pure electric, mild hybrids, self charging petrol-electric hybrids, plug-in petrol-electric hybrids and potentially for some markets diesel-electric hybrids. The Geneva Motor Show was awash with new and future electric and hybrid models from most volume manufacturers who by law have to meet ever more stringent emissions legislation and hybrid technology in its various forms seems to be the way forward for now.

Talking of CO2 emissions the 1.5-litre CR-V petrol models have a range of emissions from 143 to 151g/km depending on the spec, manual or auto gearboxes, 2WD/4WD choices, 5/7-seat options and vehicle weights.  By comparison the 2.0 petrol-electric Hybrid models all with eCVT auto transmission, 2WD/4WD options, 5-seats and varying weights have CO2 figures ranging from 120 to 126g/km. That significant CO2 reduction offsets the higher purchase price and provides lower VED road tax and company car Benefit-in-Kind tax rates.

Those are important figures for both company car drivers and retail customers and the Honda CR-V Hybrid will compete for sales against the new Toyota RAV4 self charging petrol/electric Hybrid and the sales-leading Mitsubishi Outlander PHEV plug-in petrol/electric Hybrid 4WD.   The RAV4 with a 51.2mpg figure and the CR-V with 51.4mpg, although hybrids have no plug-in charging facility. They cannot compete with the low 40g/km CO2 figure or the official 156mpg of the Outlander PHEV which of course means lower tax costs but the Outlander does cost a shade more to buy/lease. 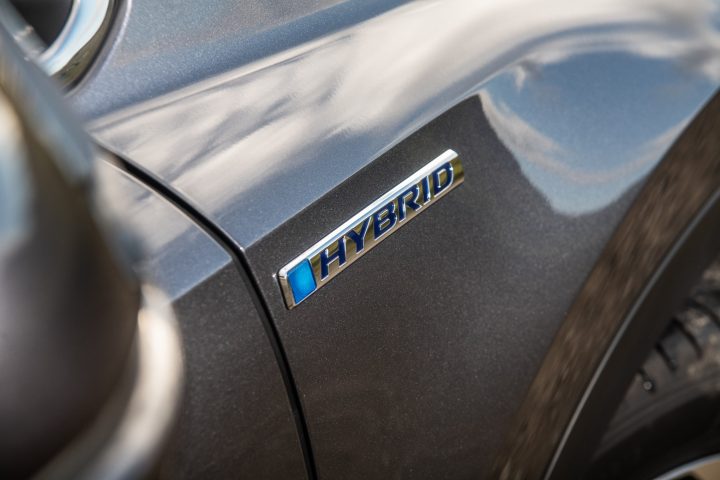 The only visual difference between the petrol powered new generation Honda CR-V models and the very new Hybrid models is the addition of discreet Hybrid badges on the exterior and minor changes to the switchgear and controls inside.

Otherwise the CR-V Hybrids have the more muscular body styling introduced at the end of last year and the interior has the same roomier space and a significant upgrading of trim materials.  The new Hybrid models also retain the excellent ride comfort characteristics of the new petrol models. 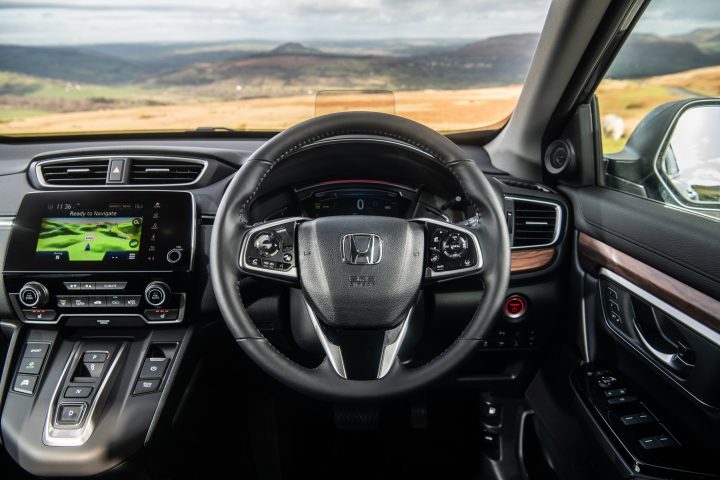 To get to the ‘meat’ of the CR-V Hybrid, it’s all about the technicalities of the hybrid system. The Honda Hybrid Performance system is controlled by Intelligent Multi-Mode Drive (i-MMD) technology.

The petrol-electric powertrain can propel the CR-V Hybrid from zero to 62mph in 8.8-seconds in 2WD guise and in 9.2-seconds for the 4WD mode. 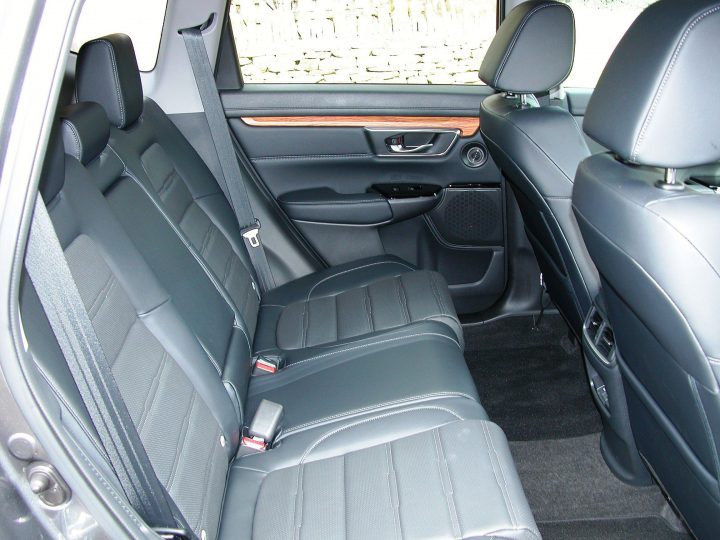 For my week it returned 43.5mpg covering local short commuter routes, winding country roads and some motorway travel.  Interestingly by comparison in November last year I tried the 1.5-litre petrol CR-V CVT auto with the same EX spec and 4WD system and for that week of driving using more or less the same type of roads the real-life figure was 32.5mpg.

That version was priced at £36,455 so the price of the comparable spec 4WD auto Hybrid version at just £850 more, given its lower taxes and better fuel economy, looks a viable alternative.

The i-MMD system intelligently and automatically switches between three driving modes to provide the most efficient driving performance. These modes are: EV Drive,where the lithium-ion battery supplies power to the electric propulsion motor; Hybrid Driveis where the engine supplies power to an electric generator motor which in turn supplies it to the electric propulsion motor;  Engine Drivemode is where the engine is connected directly to the wheels via a lock-up clutch.

In most urban driving situations the system will shuffle between Hybrid Drive and EV Drive for optimum efficiency. In Hybrid Drive excess power from the petrol engine can also be diverted to recharge the battery via the generator motor. EV Drive permits pure-electric propulsion and gives the CR-V a zero-emissions range of around 1.2 miles depending on the driving condition and battery charge. The Engine Drive mode is the most efficient set-up for cruising at higher speeds and it can be supplemented by an on-demand power ‘boost’ from the electric propulsion motor to supplement engine torque under certain conditions 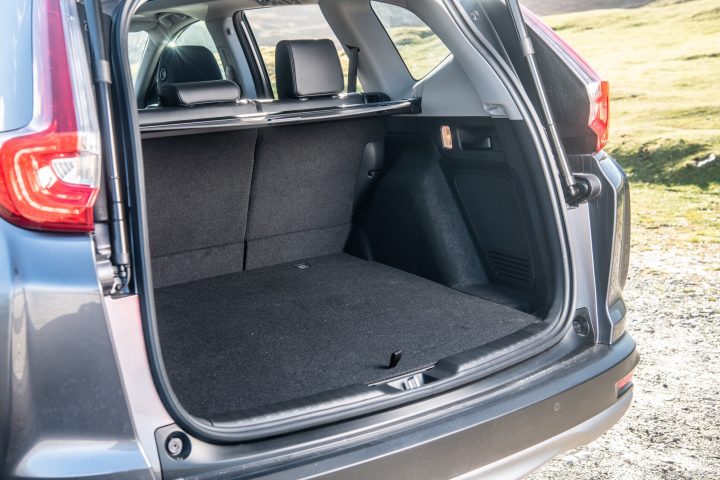 Rather than using a conventional transmission a single fixed-gear ratio creates a direct connection between moving components resulting in a smoother transfer of torque. The CR-V Hybrid is also equipped with a Deceleration Paddle Selector system. This allows the driver to adjust the car’s rate of deceleration using paddles behind the steering wheel to adjust harvesting of charging power to the battery through regenerative braking.

The 2.0-litre engine, propulsion motor, generator motor and power control unit are located under the bonnet while the lithium-ion battery pack is housed under the boot hence the slightly less boot space compared to petrol powered models.

It all sounds very complicated but in reality it’s very easy to use and live with. For example the drive selector controls are positioned in the centre console where a compact switch-style transmission selector is used rather than a conventional lever. Drive, Park and Neutral functions require a button push while Reverse requires a pull-up action. A ‘Sport’ mode button enables a more responsive throttle input for the hybrid system. There are also buttons for the EV and Eco modes – ‘simples’. 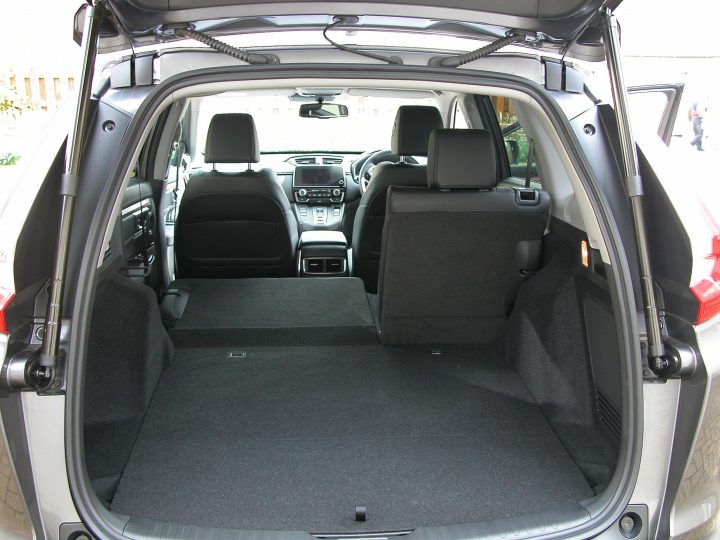 It is just a case for the driver of getting into the vehicle, pushing the Power button and selecting either Drive or Reverse and of they go. From standstill, unless in EV Drive mode, the petrol engine runs with a subdued tone but that’s because it is only being used as a generator to supply electric power to the electric motor.

Hard acceleration will connect the engine to the driving wheels and then the engine revs rise noticeably before dropping again when the required speed is reached.

The 4WD system is an on-demand arrangement. Starting from standstill the rear wheels are connected via a propshaft but once underway this decouples and reverts to front wheel drive. However when extra grip is needed a multi-plate clutch reconnects the propshaft with up to 60% of the driving torque being diverted to the rear wheels.   A yaw rate sensor will also activate the 4WD system providing extra cornering torque to whichever rear wheel needs it.

The Honda CR-V Hybrid retains all the good looks inside and out. It is roomy with ample rear seat passenger legroom, levels of driver support and safety technology, efficient connectivity functions, a comfortable ride and no stress or fuss hybrid easy driving functions. The only negative issues are an old fashioned small sized touchscreen and sat-nav system, no 7-seat option, no plug-in hybrid option and a lighter towing weight than petrol versions which will rule the Hybrid models out for caravaners etc. 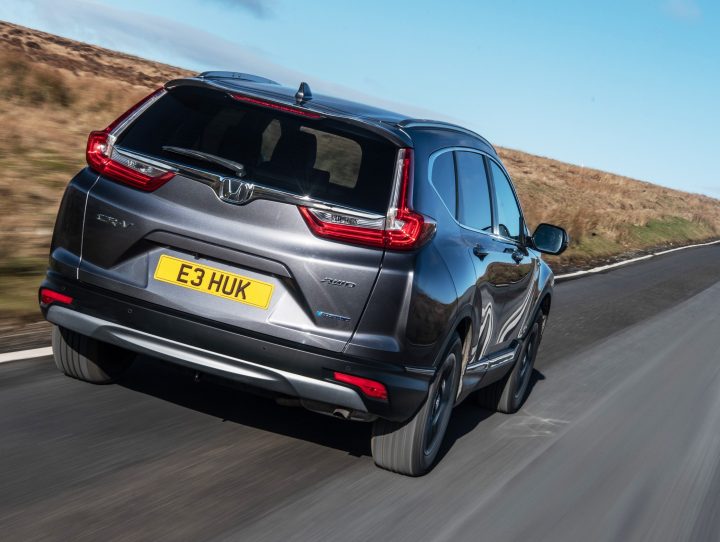 But with no driving range anxieties, as with pure-electric vehicles, and not a lot more to pay for higher spec Hybrid models over petrol versions, with better fuel economy and lower taxes  – the new Hybrid is ultimately the best CR-V yet, except for those that want a tow vehicle.