This will be a very important year for Jaguar.

It is their 80th anniversary and will see the introduction of the new lightweight aluminium XE sport four-door saloon into the all-important C-sector dominated by company car customers and fleet sales.

With its high spec, low emission and low taxation potential the XE powered by new British built engines will compete against the Audi A4, BMW 3 Series and Mercedes-Benz C-Class plus other models from Infiniti, Lexus and Volvo.

Also in 2015 their flagship sports car, the F-Type Convertible/Coupe models, get a minor styling refresh,  AWD models will join the range, a six-speed manual gearbox will be introduced as an option to the current eight-speed Quickshift automatic and the three supercharged petrol engines remain.

From the current six variants in the Roadster/Coupe range the line-up will be expanded to 14 derivatives following these changes for their 80th anniversary year.

Jaguar was founded as the Swallow Sidecar Company in 1922 by William Lyons and William Walmesley. In 1935 they produced their first car the SS Jaguar, a 2.5-litre sports saloon. After the Second World War the SS initials were dropped for obvious reasons and the car became a Jaguar. At various times the Jaguar brand has changed ownership including spells with British Leyland, Ford and ending up under the parentage with Land Rover of the Indian engineering conglomerate TATA in 2008.

What has followed has been a huge investment in aluminium body and component construction technologies, new production facilities and most recently new JLR engines now starting production at a new Wolverhampton factory.

After all this investment it’s pay-back time and both Jaguar and Land Rover have to increase their global sales.   The new XE is essentially a long awaited replacement for the Ford Mondeo based Jaguar X-Type range which stopped production in 2009 and it is expected to increase Jaguar’s global sales by 50% with many of these sales being to fleet and business user-choosers customers.

But it’s not yet the XE that is the focus of this road test – it’s the F-Type Coupe. It is one of their most recent new models which went on sale during 2014 following the soft-top Convertible arrival in 2013.

The F-Type is considered to be the long awaited replacement for the elegant E-Type which ceased production in 1975.

In truth the XJS was probably the most logical E-Type replacement but that finished production in 1996.  Since then Jaguar has soldiered on with the aging – but still elegant XK Coupe and Convertible models. 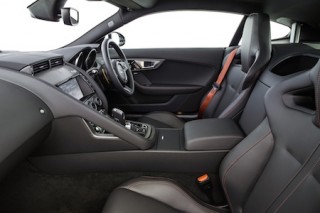 Like the two door, two seater all aluminium F-Type Convertible, the Coupe is available with the choice of three supercharged petrol engines, the 3.0-litre V6 340hp, the S 3.0-litre V6 380hp and the R 5.0-litre, V8 550hp. Up to now they have all been mated with an eight-speed Quickshift automatic transmission with manual sequential or fully automatic modes with drive to the rear wheels.  Available to order now is the option of a six speed manual gearbox and AWD but this depends on the model/engine chosen.

Which model to choose is the big question?

The Convertible when launched I didn’t especially like because Jaguar’s traditional elegant styling had been ditched for a more aggressive and muscular design more in keeping with American sports cars than classic  British Jaguar refinement.

It is not very roomy, the ride is harsh and the loss of a metal roof inflicted body-shake and shimmy due to the lack of torsional rigidity.   I think the overall exterior appearance with the solid Coupe roof improves the look of the car.

Having just had a brief drive in the Coupe the torsional rigidity is far better and that makes the handling during cornering more predictable but the ride is still firm and the interior space is still tight for six-footers.

I just could get the seat back far enough for my long legs and the seat back is too upright as there is no room to recline it slightly.   A composite construction powered tailgate gives access to a 407-litre boot.

Which engine to choose is another major consideration?   The nicest and most cost effective is the high revving 3.0-litre V6 340hp supercharged petrol unit and it is still very swift and very much more affordable to buy but they are all expensive to run.

The eight-speed Quickshift auto gearbox with sequential manual or fully auto modes is a joy to use so I wouldn’t be choosing the new six-speed manual option.

The signature exhaust note of all the F-Types engines is a stunning howl and by pressing the ‘loud’ button the tone changes to an even more chilling sound, a hallmark of the F-Types. 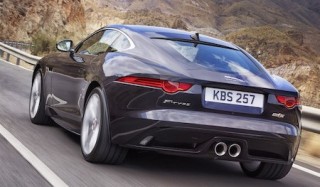 Considering the significant extra purchase costs and even higher taxation of the two more powerful engines,  the  3.0-litre V6 340hp unit  carrying a price tag of £53,050 for the Coupe has to be the nicest overall for most UK customers given our congested roads and speed restrictions.

It will be interesting to drive in the future the Type R 550hp engine with AWD  just to see what all that power and all that extra grip gives the F-Type. Will it really be worth paying   £91,650 for the Coupe or £97,135 for the Convertible? I think not,  but a driver’s ego should never be underestimated or underpriced.

For: Ample performance, brilliant exhaust note during hard acceleration, better and more predictable handling than the Convertible, high quality cabin materials, this version is good value for money in this supercar sector.