You are here: Home / First Drives / Fiat 500X appeal is down to viagra

Arriving in Fiat dealerships this weekend is the new 500X, a compact SUV version of their cute and very popular 500 City Car and MPV range. 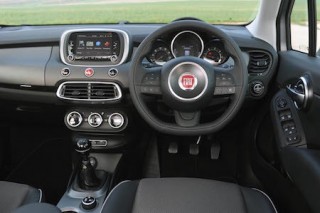 There are the urban styled Pop, Pop Star and Lounge specifications plus more rugged Cross and Cross Plus versions depending on the engine chosen.

Depending on the engine and specification level chosen there is the choice of five or six speed manual and unique in its class a new 9-speed automatic transmission.

Once complete the range will have 22 different variants and there will be a 50-50 sales split between petrol and diesel engine engines.   During the remainder of this year Fiat expects to sell around 10,000 units of the 500X in the UK with 3,000 going to current Fiat 500 users and the remainder to conquest customers.  Sales next year are expected to be around 16,000 units.

The retro Fiat 500 family has been a huge sales success for Fiat with more than 44,000 sold in the UK last year putting it in ninth position in the UK’s top ten new car sales chart, well ahead of MINI. That 2014 sales total represents almost two thirds of all new Fiat cars sold in the UK last year.  By the end of this year UK customers will have bought a total of a quarter of a million Fiat 500s since the modern interpretation models introduction eight years ago.  The original tiny Fiat 500 was launched in 1957 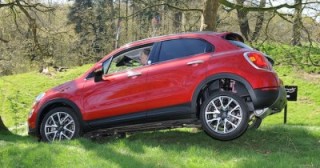 Fiat UK says the compact SUV sector in the UK is three times what it was three years ago   becoming this country’s fastest growing segment with demand being driven by the introduction of more models.

Leading the way in the sector is the Nissan Juke with the Renault Captur, MINI Countryman, Vauxhall Mokka, Peugeot 2008, Suzuki SX4 S-Cross/Vitara, Skoda Yeti, Ford EcoSport, Citroen Cactus and the Kia Soul being just some of the most popular models.  Also in the picture is the new Jeep Renegade compact SUV which shares with the 500X much of the platform and drivetrain under the Fiat-Chrysler partnership and is priced from £16,995 to £27,995.

At a certain age impressions and performance don’t come as easily as they once did, so is it Viagra or Botox you need and you may wonder which is better, says Robin Roberts.

Fiat faced the same dilemma with the continuing rejuvenation of the immensely popular 500, which can trace its origins over 58 years and at least two incarnations spanning the twentieth and twenty-first centuries.

The cute original 500 from 1957 is the iconic small car which to most has personified Fiat, and to which the Italian company turned when it wanted to get over its mid-life financial crisis 50 years later.

That brought in exceptional sales and Fiat decided to build on that success with the bigger 500L.

To me that was the Botox injection in the Fiat 500 which dramatically changed its looks. But not necessarily for the better.

Now we have moved on again and to recapture its youth there is now the Fiat 500X with a lot more going on underneath and inside while it stays outwardly more faithful to the Fiat 500 of 2007. It’s the Viagra vehicle for the very fun loving.

And if you want to play around there are 22 different versions of the Fiat 500X to entertain you based on six petrol or diesel engines and three transmission possibilities with three traction variants. Not all are immediately available but will gradually be added to the range. You’ll need to lie down after the salesman explains them all.

In size, the newcomer falls neatly between the Fiat 500 and the 500L while the popular Panda 4×4 will continue in the Italian range to meet demand for its particularly owners. That is an impressive line up for any manufacturer.

They are all roomy with a good boot behind, comfortable seats and offer excellent visibility. 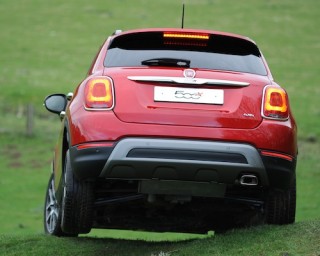 The sophisticated traction control system, modified for its full-4WD version, is simple and highly effective and takes the wondering out of wandering off-road and coping with deteriorating on-road conditions.

The diesel delivered 50mpg but worked harder and noisier than the petrol model and we only saw that return under 36mpg, but it was possibly the better drive over a mixture of A and B class roads and some dual carriageway on our route.

I liked the pick up of both, the brakes and gearchange but the steering on the 500X diesel was less communicative in the hands than in the petrol model.

Being the latest in the sporting SUV sector will give the Fiat 500X a big advantage and convert more drivers to the brand and this class of car, helped by a very attractive personal contract plan and price for the majority of retail buyers.