It’s the original Toyota SUV and the latest RAV4 is still one of the best you can buy in this booming sector.

The Recreational Activity Vehicle 4 was launched in the mid-1990s as Toyota’s first SUV intended to offer more space and luggage room for families who liked an out-door lifestyle. It was available with a 2.0 petrol engine and choice of front or all-wheel-drive in three or five-door body styles and in recent years it was badge engineered as the Suzuki Across. 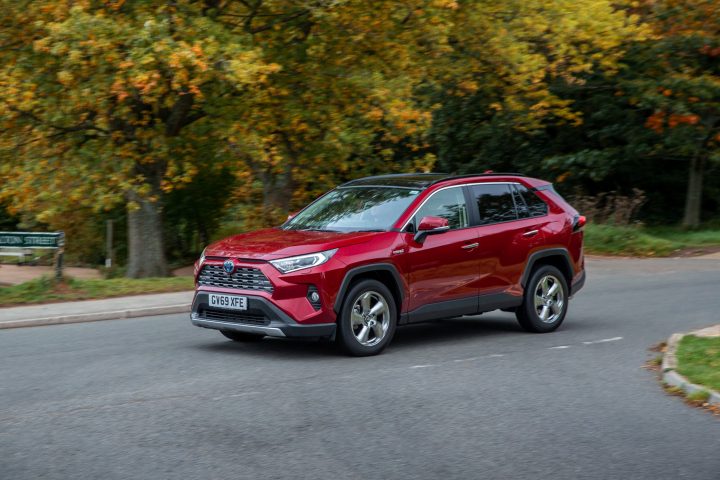 Today’s RAV4 range has six trim levels over a dozen models, still offering 2WD or 4WD, with a choice of hybrid or plug-in electric power supporting a four-cylinder 2.5 litre engine, a single five-door bodystyle and prices from about £31,000 to just over £46,000.

Toyota’s word-wide reputation in the off-road market underlines the abilities of the RAV4 with its highly sophisticated powertrain blended with its experience of electric power and delivered in a very driver and user-friendly way. 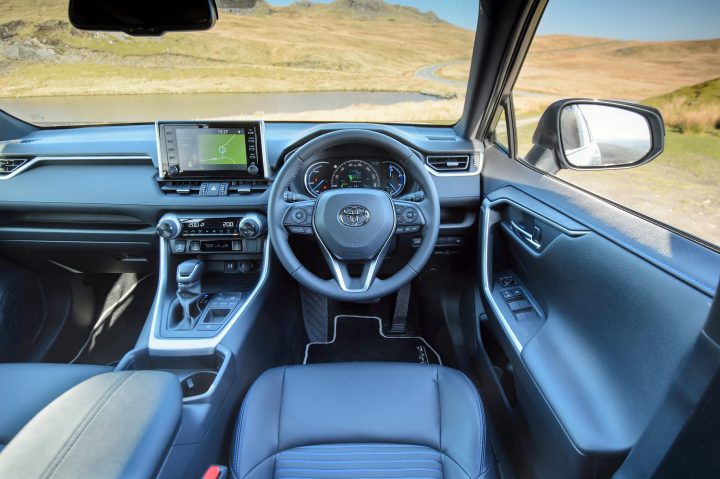 The beefy 2487cc engine is a workhorse of the Toyota range and provides plenty of punch for this 1720kg model, although it’s not particularly quick to pickup from standstill or low revs., and it benefits from the additional electric power to provide practical useful performance when overtaking. 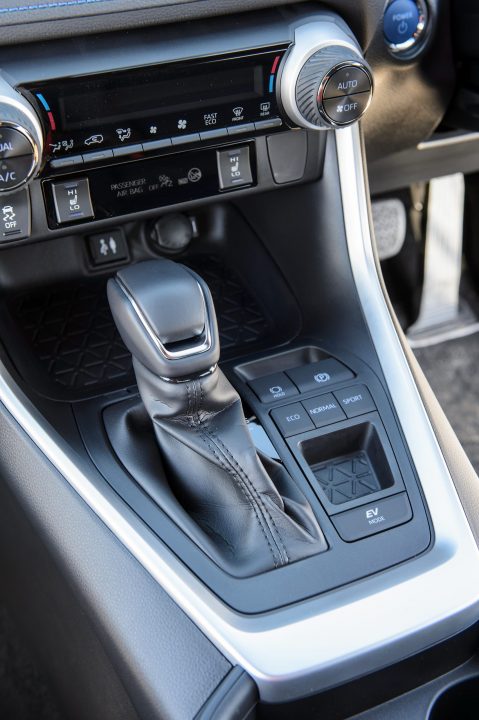 It also makes a bit of noise when you press the throttle to make the most of the power albeit with near silent assistance from the motor, and the continuously variable transmission is extremely smooth.

Steering and braking responses were also good and had plenty of feedback but it did not feel particularly agile and the body rolled around some corners. I liked the ability to select eco, normal or sport mode responses and it was one of a very few cars which actually exceeded the published and accepted fuel economy figures over a series of roads and various traffic conditions. 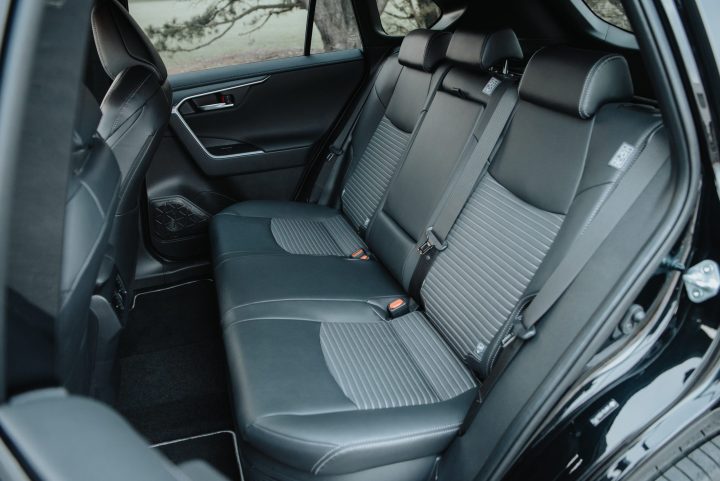 Visibility was excellent all round with low waistline, big windows, very good wiper/ wash system and intelligent headlights at night which reduced dazzle but maximised range ahead.

Access was easy with big opening doors and plenty of room in the seats and loadspace, which could triple capacity as the rear seatbacks progressively dropped.

The front seats had lots of adjustment room and combined with a reach and rake adjustable wheel the driver could precisely select the best position with memory function as well.

The ride quality was slightly firm, not uncomfortable, and the wrap-around seats really held occupants while the suspension soaked up neary all bumps without a problem, although you could hear how hard it was working.

The test car was equipped with a huge sunroof, premium JBL entertainment system and panoramic view monitor as well as a protection pack including mats and mudflaps.

For the driver, everything fell directly to hand around the wheel and across the fascia, although some switches were partly obscured on the lower face of the fascia. 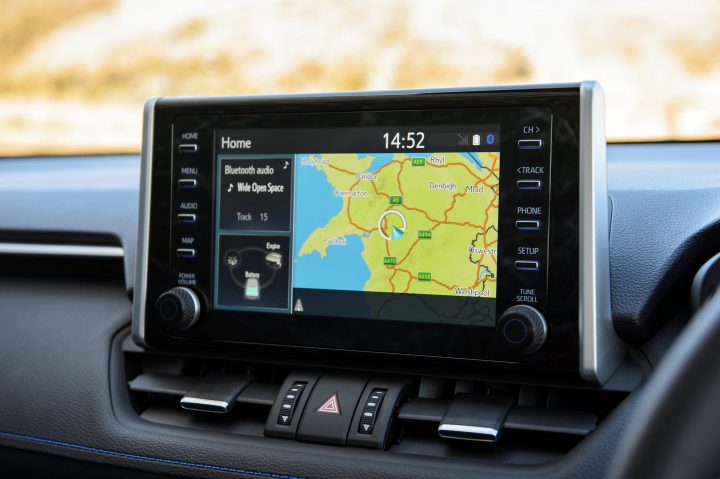 The central infotainment display was fairly well sized and particularly clear and not too confusing a menu to use with separate heating and ventilation controls.

Infront of the driver a couple of large gauges covered the essential information with slightly smaller windows for secondary data and between them was a panel for selectable displays of vehicle settings, navigation, odometer and fuel use. All were very clear in any light conditions. 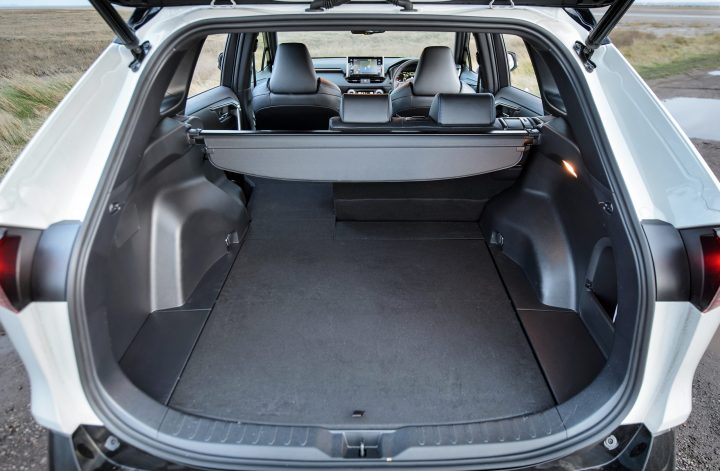 I think that despite its growth in size over the years to reflect the sector changes and the fact people are getting bigger, the Toyota RAV4 still felt more car-like than a lot of rivals and its smoothness and refinement put it in a higher classs than most of them at a price which will embarrass the traditional executive or prestige products now populating the market. 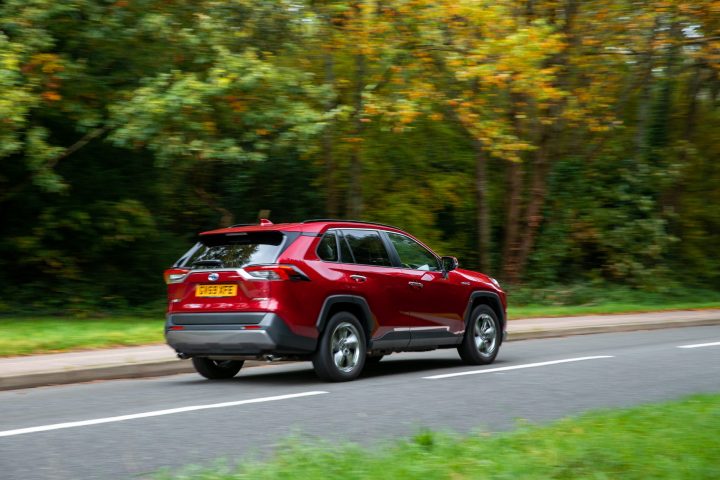