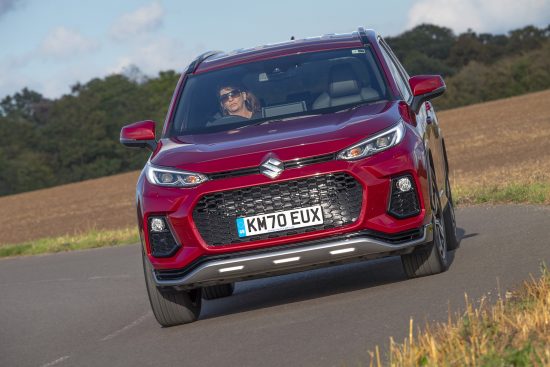 One of these emerging partnerships is between Japanese brands Toyota and Suzuki. Toyota is supplying a PHEV plug-in hybrid version of their RAV4 mid-sized SUV to Suzuki who have branded it Across.

Also Suzuki have added a Swace 1.8-litre 122hp petrol electric self-charging hybrid model to their range which is their branded version of the British built Toyota Corolla Touring Sport hybrid estate.  Available with two levels of specification it is priced at £27,499 and £29,299 with 64.2mpg and CO2 at 99g/km. 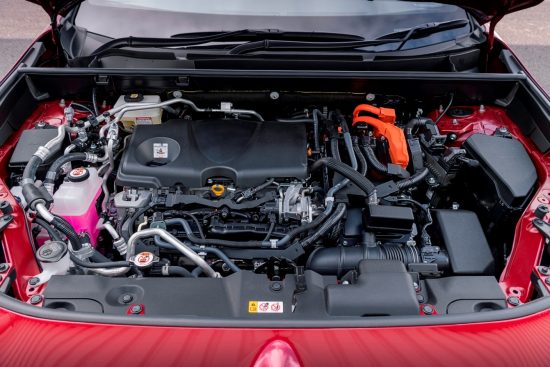 But it’s the Across we are featuring here with the Swace review to follow in the next few weeks hopefully if the lockdown permits us Journalists to keep working. The Across 2.5 PHEV auto 4WD 5-door, 5-seater  mid-sized SUV arrived in the UK ahead of the Toyota RAV4 PHEV 2.5 auto version which arrives in April.

But the Across will only be available in limited numbers initially and with one high level of specification.  Around 400 units of Across will be available this year with 70% of them expected to be snapped up by company car users because of the very low 6% Benefit-in-Kind tax charge. Approximately 140 have been sold so far. Suzuki in the UK confirmed there are no plans for them to offer their branded versions of the already available petrol-electric self charging hybrid versions of the latest RAV4 with 2WD and 4WD options.

The Across is priced at £45,599 which could make you gulp for what prices we normally associate with Suzuki models.   If it’s any consolation the Toyota RAV4 PHEV, available with two equipment levels, costs even more  at £47,395 and £50,895  That’s well over £15k more than the  RAV4 2.5-litre petrol-electric hybrid models which also have automatic transmission as standard with the choice of 2WD or 4WD versions. 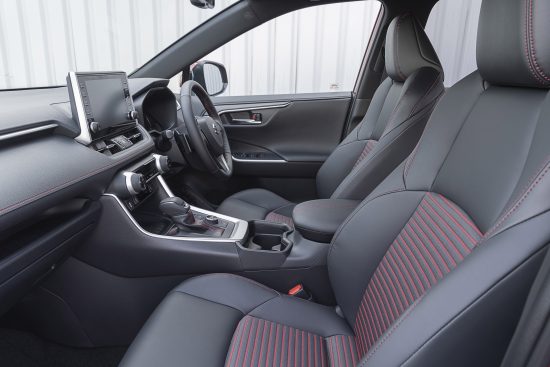 But what you pay for upfront with the Across PHEV and RAV4 PHEV, you gain with impressively low running costs.  The Across figures are just 6% Benefit-in-Kind tax because of its comparatively long 46-miles electric range and low 22g/km CO2 emissions. Rivals range from 10 to 12% BiK because they can vary from 28 to 35-miles.

Suzuki see the competitors for the Across as the Range Rover Evoque 1.5 P300e, Ford Kuga Vignale  2.5 PHEV, Peugeot 3008 1.6 Hybrid4, Citroen C5 Across 1.6 Hybrid, Vauxhall Grandland X 1.6 PHEV and the long standing PHEV market sales leader the Mitsubishi Outlander 2.4 PHEV.   Only the Kuga and C5 models cost less than £40k but they are only 2WD versions.

Tax-wise the Suzuki Across makes massive sense for business car users with as its low BiK rate equates to paying £91 a month for the 40% tax payer. Other PHEV SUVs I’ve listed range from £123 to £177 a month and conventional petrol and diesel versions are double or treble that cost. 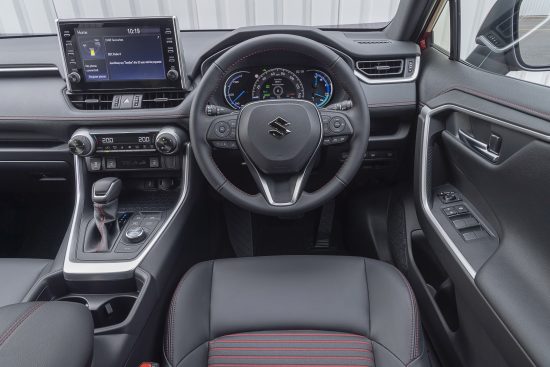 Unlike many PHEVs I’ve tried the Across more of less delivered on the official 46-mile EV driving range and during part of my extended time with the vehicle during the recent lockdown conditions quite often it was very cold with ice, snow and fog so the electric windscreen, rear window, heated front seats and heated steering wheel were all used.

Just being used for local travel in its Auto hybrid EV/HV mode setting the vehicle used no petrol at all and if the engine did start up it was still showing around the 200mpg mark.  For one complete week I just ran it solely in electric mode for local shopping trips so it was CO2 exhaust emissions free and no petrol was used and such is the battery capacity I didn’t need to plug it in to charge it knowing that if I did run out of electric power the petrol engine would come to my rescue – very comforting.

The Plug-in Hybrid system is equipped with four modes which are: the default EV mode, Auto EV/HV mode, HV mode, and battery charger mode which the driver can select depending on driving conditions and battery status. In EV Mode the vehicle is driven entirely by the power of the electric motor even under full acceleration.

When in Auto EV/HV mode and HV mode, the engine contributes to power delivery when required when the accelerator is strongly pressed. To store electricity for the EV mode when the remaining charge is low, the battery charger mode runs the engine to fully re-charge the battery. The high capacity lithium-ion battery has 96 cells, a voltage of 355V and a capacity of 50.9Ah. 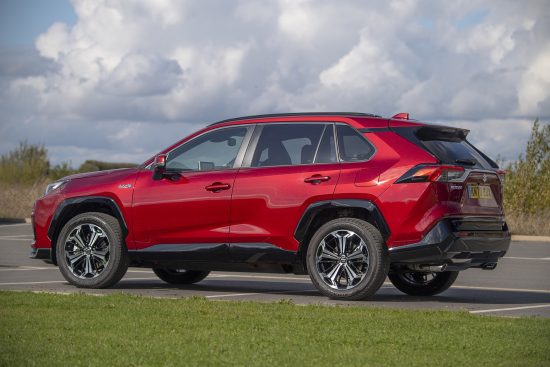 All PHEVs work best for urban or local short distance travel as longer journeys with motorway cruising have limited opportunity to top up the battery with electricity generated by regenerative braking. So the fuel economy figures look good for 80-miles then slowly deteriorate as electric support runs out and the petrol engine takes over.

On the one long continuous journey I made of 160-miles during lockdown the Across returned 75mpg overall. Much of the time it was showing 125mpg until the electric power support fully ran out and from then on it had only a re-supply via the regenerative braking function. 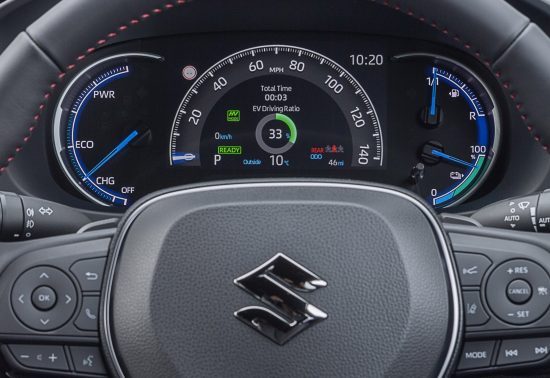 Yes I could have used the engine to act as a generator to recharge the battery but with my minimal driving opportunities at this time I wanted to know how efficient regenerative braking energy capture was. For most of my driving it used no fuel as I charged up via a 13amp plug which took to recharge from empty to full in just over six hours.

The vehicle is supplied as standard with a 13amp domestic supply charging cable but a fast charging public charging point cable has to be bought from a Suzuki dealer at an extra cost of £155.

Now let’s get more technical; the Across has a 2.5-litre, 4-cylinder petrol engine, well known in the Toyota line-up, This long stroke high compression unit uses direct and indirect fuel injection depending on the load placed upon it. There are two electric motors, one 134kW up-front and one 40kW at the rear which provides the 4WD element driving the rear wheels through the E-Four electronic 4×4 system.

This system also has a selectable Trail mode which operates a limited slip differential to limit traction torque being lost through a spinning road wheel.   The E-Four system controls torque split between front and rear wheels from 100% to 20:80% depending upon demand and tyre grip.

The total power output from the engine and both electric motors is a healthy 306hp and there is massive amounts of torque with the engine providing 227Nm and electric motors – 270Nm front and 121Nm rear.  No wonder the acceleration speed is so rapid at just 6.0-seconds from zero to 62mph. 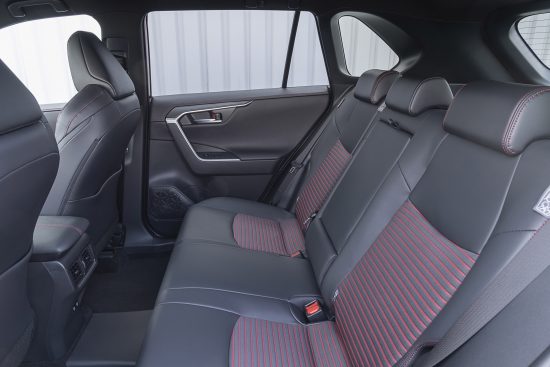 With the E-CVT transmission  the smooth input of power is seamless and even when the accelerator was pressed hard there was not the usual CVT high-pitched noise of soaring engine revs as the torque from the electric motors provided the grunt needed. Around town the electric motor/engine combination was smooth and docile and just very easy to live with.

It’s not all perfect of course with the Across, whilst the ride comfort is generally good and the suspension compliant, impacts from potholes could be felt too much inside the cabin and probably the 19-inch wheels could be the issue with their semi low profile tyres.  The handling and cornering control was first class for an SUV, the steering a shade on the light side and the visibility very good with its elevated seating positions.

Storage space is good and the boot space measured up with 490-litres plus the rear seat head and legroom was fine for three adults. Styling wise it’s got good exterior kerb appeal and differs from the Toyota RAV4 versions by having a different bold grille and front bumper plus of course Suzuki and Across badging.

The interior quality is good, nice chunky heating temperature controls and other buttons to adjust the heating and ventilation systems and thankfully not lost within the touchscreen functions. There are heated front and rear seats, heated door mirrors, heated steering wheel, heated tailgate and windscreen, all ideal for winter motoring, although they all use up electric power but having a petrol engine on-board there is no driving range anxiety or the need for lengthy en-route stops to recharge the battery. 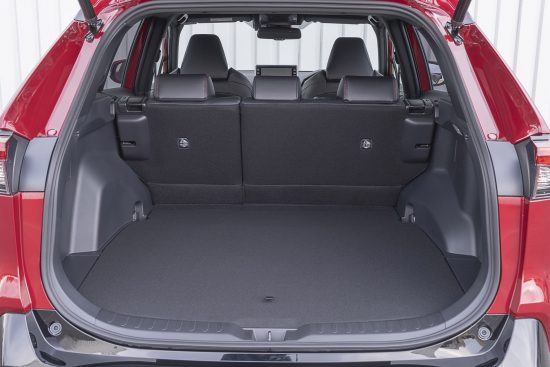 The high spec promised by the high price is actually comprehensive and in terms of safety, refinement, driving assistance, parking, connectivity and so on all are first class apart from the lack of a sat-nav system. Annoyingly, a map button on the floating centrally positioned 9-inch touchscreen pops the message saying sat-nav system fitted.

In reality, we have to navigate by the Google Maps mobile phone facility, not to be recommended and my major gripe.

The Toyota RAV4 PHEV will have sat-nav and all other current RAV4 hybrid models apart from the lowest spec variant have sat-navs as standard so Suzuki’s lack of one for their range flagship Across is disappointing. 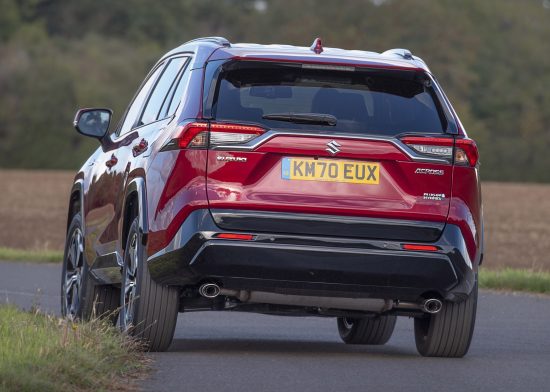 Despite gripes the Suzuki Across is the most impressive PHEV SUV on the market given the length of its all-electric range and the very low CO2 emissions, hence the best in class BiK tax saving, strong and seamless performance with 4WD traction when needed making it a very good all-rounder SUV unlike so many of its modern 2WD SUV competitors.

Against: Looks expensive to buy/lease for the Suzuki UK dealer network’s traditional customers, high spec but no sat-nav included, lesser warranty than the Toyota RAV4 PHEV model but its less costly, having to send it back to Suzuki after the test drive loan.