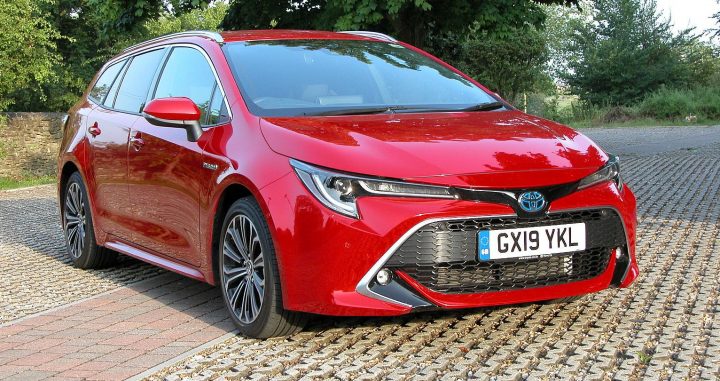 The enduring and enterprising Toyota Corolla is a firm favourite with British car buyers and it’s easy to understand why after a week with the 1.8 Sports Excel estate hybrid, writes Robin Roberts.

This spring , the 12th generation Corolla replaced the oddly-named, smaller and less attractive Auris series of models and it brought with it the latest self-charging hybrid technology which Toyota has been championing for almost two decades and now applied to their latest body architecture.

The new Corolla range comprises 31 models in saloon, hatchback or estate body styles, three trims and engine choices with manual or automatic transmissions. Except for the Turkish-built saloons, they are all assembled outside Derby, so it’s a British-built car for the most part. 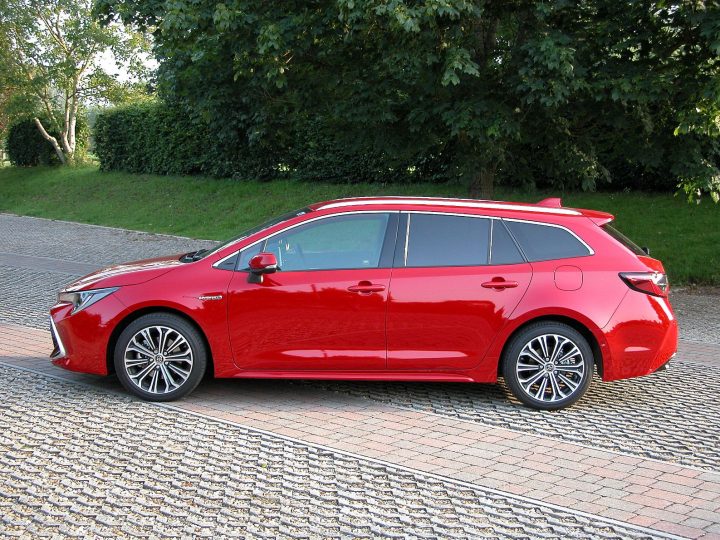 While some manufacturers are only now turning to electric motors to assist petrol engines and keep down emissions, Toyota has sold 300,000 hybrids since its Prius in 2000. Such prowess pays off handsomely in the new Corolla SE 1.8 with respectable performance truly outstanding economy and requires very little active input from the driver.

The petrol engine and electric battery / motor work in perfect harmony but a driver can also manage their symbiotic sharing of duties to extract more of what they want, economy, emissions or extra power.

Whichever mode is chosen, the power flows in a seamless manner and while it’s not sport car like in speed it’s sophisticated and smooth, and economical.

With the CVT attached to the engine the “gear-changes” flow without interruption wether accelerating or slowing.

The sophistication of the powertrain is matched by the power steering precision and subtlety, with good feedback, a compact turning circle and no kickback on open roads, and the brakes carefully balance effect and effort, and there’s a good parking brake as well. 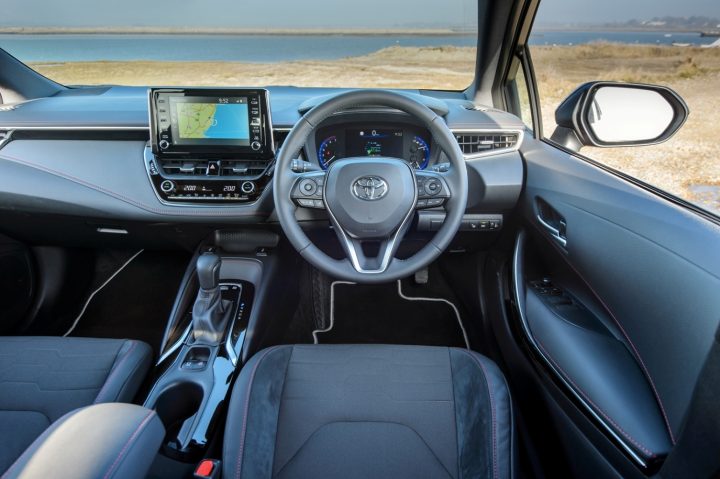 The Corolla has a lot of airbags as secondary protection but its pro-active safety features included pre-collision and lane departure warning, stability and traction control and intelligent headlights and wipers, park assist and front and rear sensors and reversing camera, which is particularly helpful with restricted vision over the shoulder or through the rear window.

Most of the other controls are on the wheel-spokes or stalks, close to hand, with a few scattered switches on the fascia. Main instruments’ display infront of the driver can be changed to promote particular functions and are very quick and clear.

That’s more than can be said for the secondary large screen in the centre of the fascia atop the console which controls mobile phone, satnav and entertainment, which was much slower to operate and not particularly user-friendly. 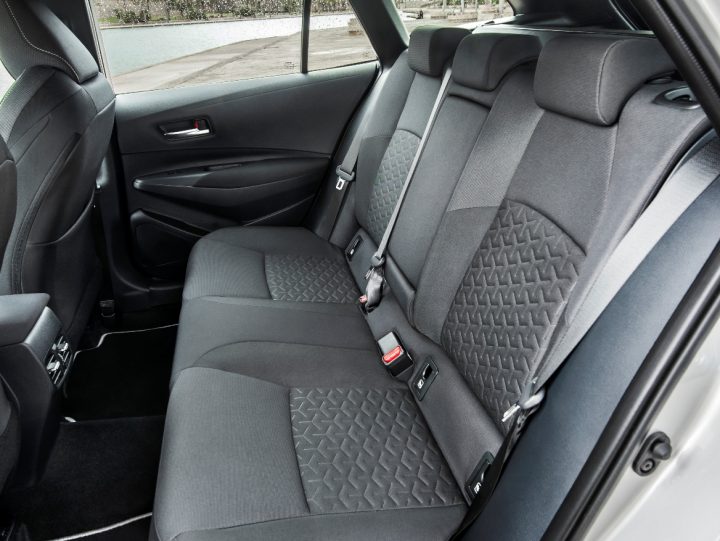 Heating and ventilation system kept the interior at desired settings, filled it with warm or cool air and had very good output, and here were powered windows to back it up.

Oddments room was reasonable not generous for a family car but the loadbed was easy to access and very quickly more than doubled in capacity when required.

Those in the rear three seats have a reasonable amount of leg room and it’s even better for the front two with adequate reach and rake on seats and steering column, but some will find heads brush the roof. 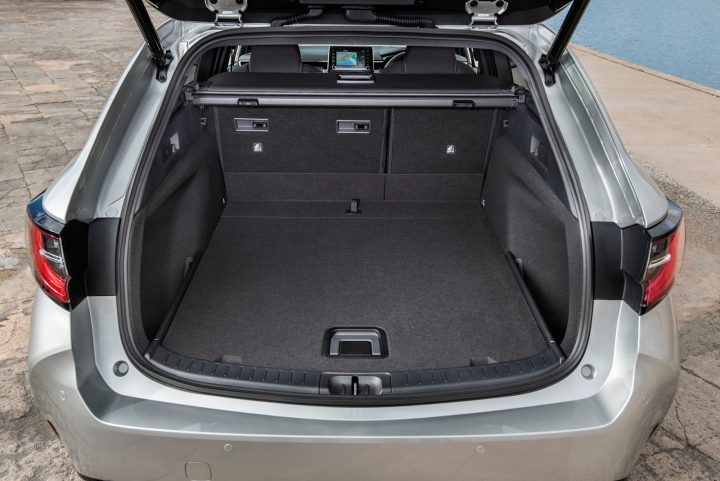 Vision is good to front and sides but far more restricted by pillars to the rear, so the sensors are welcome and the camera a real boon when reversing.

I liked the automatic wipers and headlights and they showed a lot of the road ahead in poor conditions.

Noise levels were generally low unless the engine was pushed hard, but the road rumbles were possibly the most noticeable noise in the background. 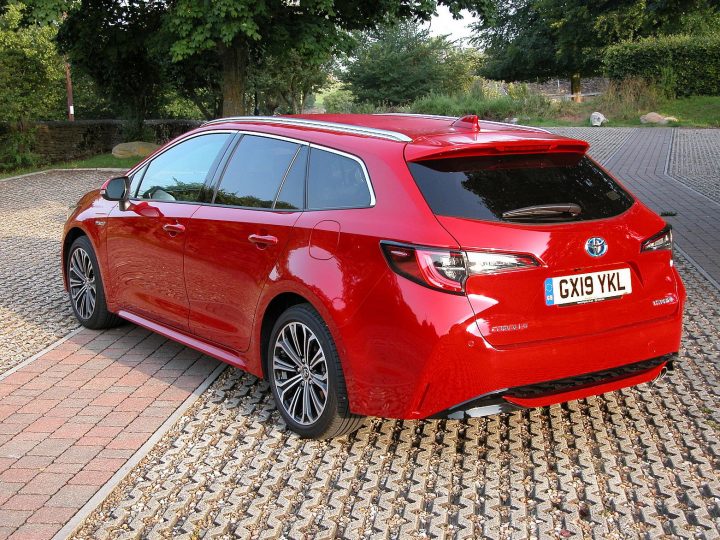 This quiet car oozed visual sophistication and had strong eye appeal with attention to detail save for some expanses of plastic on the door interiors.

With that powertrain attracting little tax costs, the economy keeping down fuel bills and Toyota’s legendary build quality so evident, the Corolla makes so much sense.