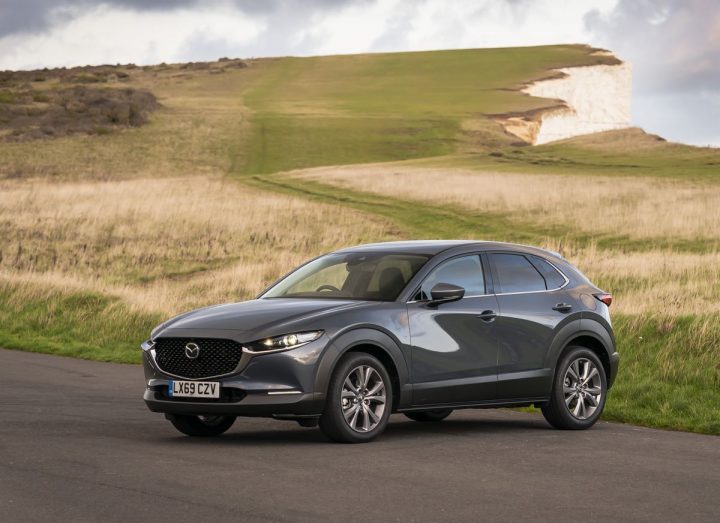 I have always been sceptical of the car awards bandwagon, until now.

In the week I was testing the Mazda CX-30 I learned it is one of the SUV finalists in the 2020 World Car Awards, and it is probably justified being included.

Even before it was introduced, CX-30 picked up a five-star Euro NCAP rating for its adult occupant safety and range of i-Active sense safety features such as lane and overtaking warnings, sensors and driver assistance technologies.

Launched last year and into the UK this January, the CX-30 sits between the Mazda CX-3 and CX-5 and extends the booming SUV choices with 26 models in five trim levels, with front or four-wheel-drive depending on the buyer’s selection of 122ps or 180ps 2.0 litre Skyactiv petrol engines, 6sp manual or automatic transmission.

It’s a cross-over model but is not heavy handed in execution and many think its just a bigger than standard five-door hatchback, so it looks less intimidating while being imposing with its smoothly contoured sides, front and back end treatment. I was struck how many people saw it for the first time and expressed approval without being prompted. It is that sort of car. 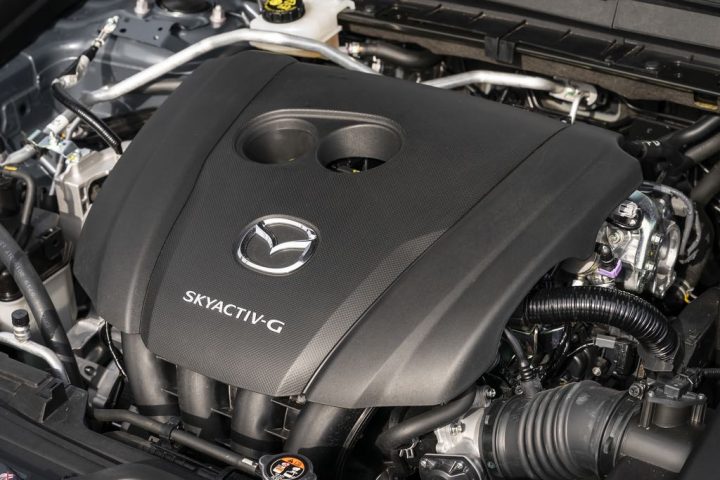 The model we tested is expected to be one of the best sellers in the series of over two-dozen derivatives. It was the manual with front wheel drive, which is perfectly adequate for most users without running to the additional expense of AWD and an automatic transmission.

The 180ps engine is matched with a 24v mild-hybrid powertrain to stretch economy and it worked well with close to 50mpg being achieved very easily on longer runs.

It is respectable through the gears but not really quick and the hybrid system is really there to stretch out fuel rather than shrink time. So you have to use the gears to make progress, particularly if loaded, but its easy progress with the long travel but light clutch, slick six-speed unit under hand and well weighted power steering. Should you need them, the brakes have good progressive power build up and slow it quickly with an electric parking brake for simplicity. 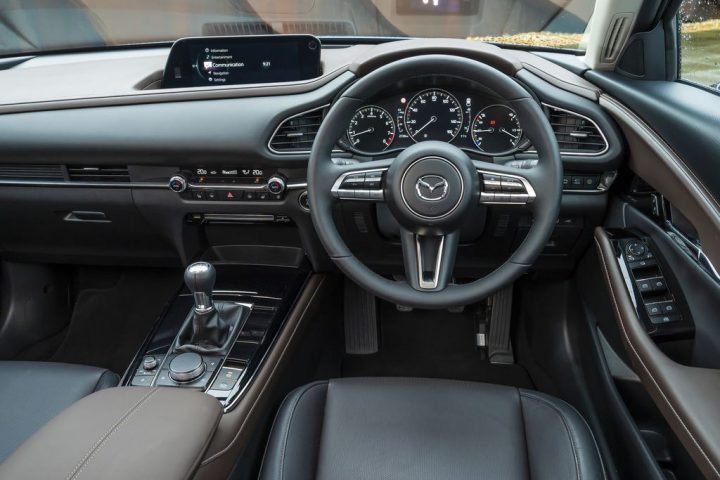 Secondary controls were mostly grouped around the steering wheel or on its spokes with fascia switches for seat and wheel heaters close to those for the heating and ventilation push and rotary controls. Another brace of switches to the right of the column and low on the fascia operated features a driver can disengage if desired including the automatic engine stop.

Instruments were directly infront of the driver, big and clear with a small panel between speedo and tachometer displaying the selectable info from the car’s computer. I liked the on-screen head-up display for speed and limit. 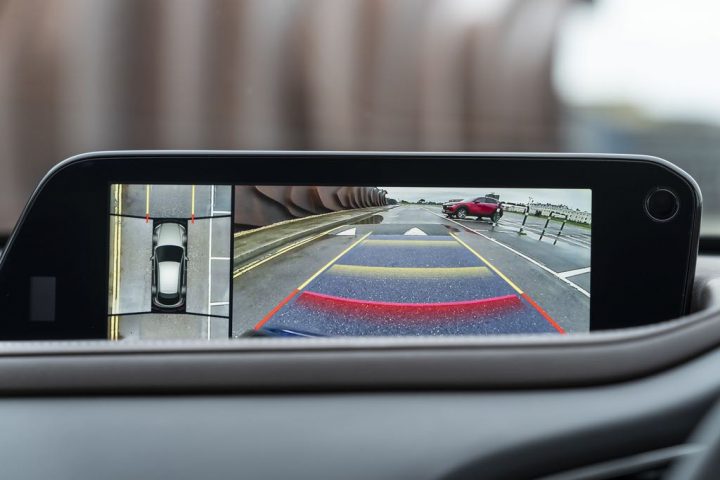 The oddments space was reasonable but not exceptional and I found the USB point for phone-charging was not very easy to use and there was nowhere to actually place a phone without it rattling around. Door bins front and back and seat pockets in the rear were backed up by a deep shelf under the fifth door.

There was a small lip to the loadbed but it was a good shape and size and the offset split seatbacks folded flat to make it a really useful cargo area. 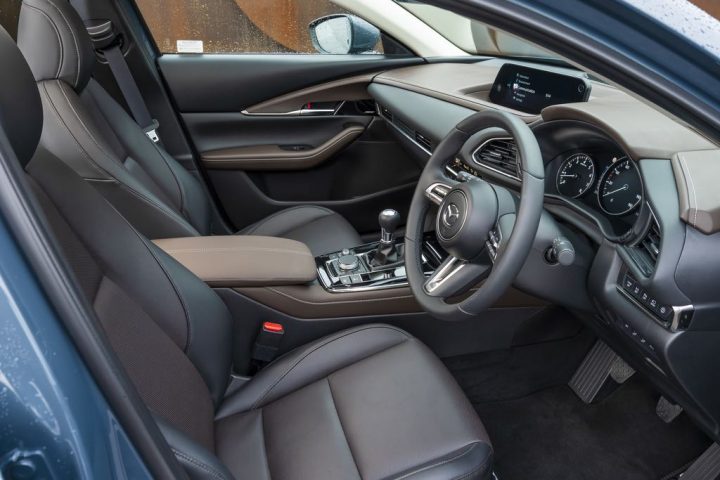 Access was good for driver and passengers with wide opening doors, big apertures and once inside the front seats in particular must be two of the best in any car with deeply shaped cushions and backrest, good adjustment and support where needed. The back 60:40 split back seats were flatter but still supportive. 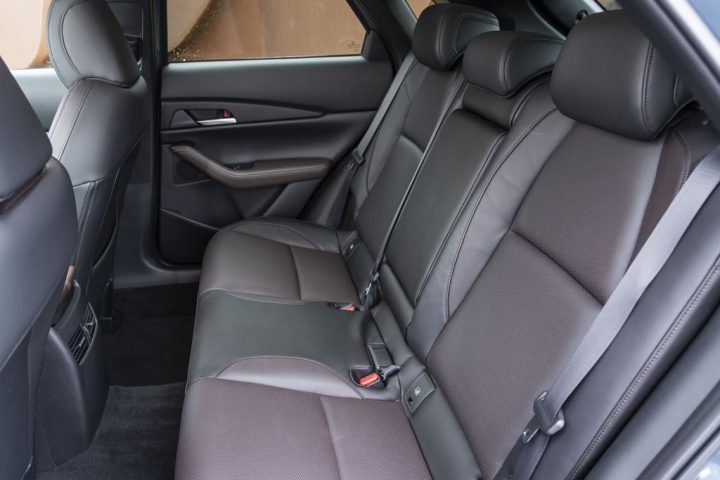 Room was very good infront, slightly short on legroom behind if a six-footer was infront, but headroom and elbow space never generated comment.

Visibility was good to front and sides, slightly restricted over the shoulder and you need the sensors and very clear reversing camera when manoeuvering.

I liked the big wipers both ends but was sorry to see that a point I picked up on the first drive shortly before Christmas has not been improved three months later, the very slow reacting automated headlights. They can take a surprising amount of time to go to full beam and then dip for oncoming traffic, much to the annoyance of other drivers. 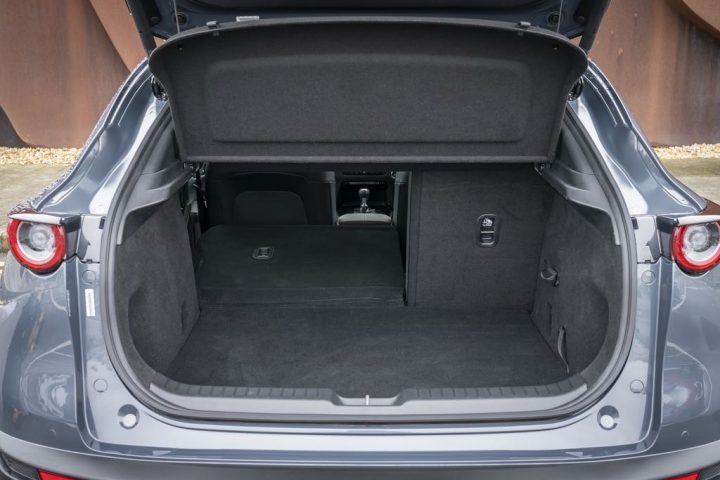 The smoothness of the Mazda CX-30 stands out in most ways, but not all. The low speed ride can be jiggly over bad bits of road but improved with speed on good main roads and motorways where it was very compliant and composed. Suspension noises and road rumbles were ever present if low, the engine almost always was quiet until stretched and the wind wuffle muted.

Whether or not you are a fan of grey and brown trim it is well executed in the cabin, with attractive lines and curves which reflect the flowing exterior shapes to the body.

The Mazda CX-30 is not only a well rounded body design but that includes the cabin space as well and it makes for a very eye-catching look from outside or inside. 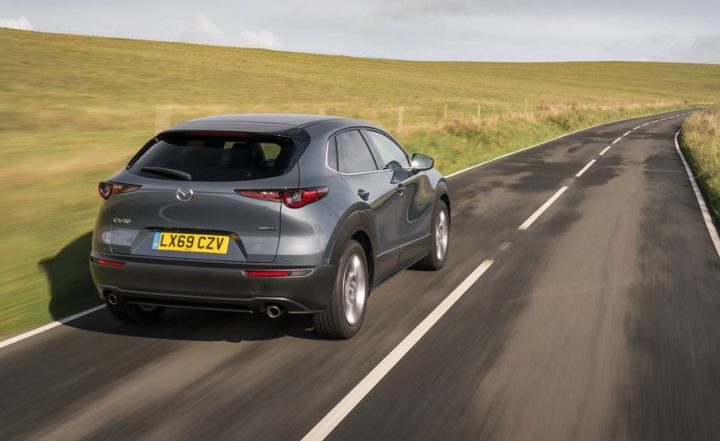 The handling was safe and surefooted without a strong tendency to run wide on tighter turns or skip around over bumps but it would be tauter with the all wheel drive transmission, which would also bring traction benefits in bad weather.

You don’t need 4WD however to be impressed by the Mazda CX-30. It is highly refined mechanically, very well equipped, enjoyable to drive, ride in and well priced against rivals.