While some manufacturers are now running to catch up in the hybrid race, Lexus is still comfortably ahead and showing them how things should be done, writes Robin Roberts

Lexus and parent Toyota Group were among the first to apply hybrid technology to their ranges over two decades ago and the models which can potentially benefit most are the big SUV type RX series.

The latest and current fourth generation RX 450h is comprehensively redesigned both inside and out, with a more up-market look and feel, fitted with cutting edge driving technology and packaged in a much better way than before.

Our test model is the entry into the new 450h 4WD range and it packs not one or two motors, but three, comprising a beefy big petrol unit atop an electric motor driving the front wheels with another electric motor pulling the rear pair along. 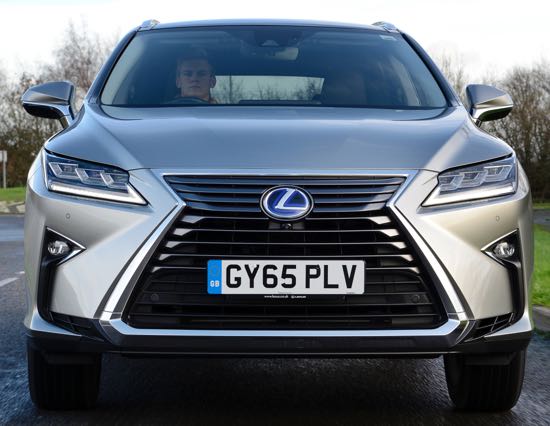 The electric motors are running all the time and utilise the petrol engine when the computerized management system says it needs more power or the traction battery needs boosting. The system then sorts out what power is needed where and surplus energy is pushed into the battery, such as when braking or on over-run.

Sounds complicated and it is but you’d not really be aware of any changes under your seat as the whole operation is unseen and largely unfelt, except for the surge in power when you accelerate.

The system usually starts in silence with the electric motors working but soon the big petrol engine cuts in and you are on your way.

Power delivery is seamless, plentiful and consistently strong and allied with the gearless CVT box the performance is very refined and sophisticated.

Revised steering and brakes in the new 450h give the car a sharper dynamic feel and the suspension does a very good job soaking up the road bumps most of the time but occasionally it was caught out by coarser conditions and you could hear it bumping over potholes and tarmac ridges.

With these motors and hefty traction battery aboard it tips the scales at over 2 tonnes and this is reflected in its acceleration which is very respectable but not rapid considering the power available. It’s just that it covers the ground so well you are not phased by its progress.

The secondary controls are plentiful and placed for easy operation around the wheel spokes or fascia and there is a massive display infront of the driver and an infotainment screen on the top of the central console so you are in do doubt about anything.

Heating and ventilation is well controlled and the oddments space is good throughout, the boot sacrifices a bit of nominal room to that found in the 200t 2WD but there is still a good shape to fill and it more than doubles when the back seats are dropped.

Access is good with a powered tailgate, big side doors at the back and even bigger front doors which mean you can climb in and then find more room than before in the cabin with its extended wheelbase. Head and shoulder room is good.

Visibility is not so good to the rear and over the shoulder when joining traffic but side and front lines of sight are clear, supported by a pair of the brightest headlights I’ve encountered in a car and an effective wash/ wipe system.

The seats are leather covered and thoughtfully shaped even if tall drivers might find them lacking in thigh support, their deeply padded and the front pair have a good adjustment range. The back seats are also shaped and supporting and the legroom is good for those behind as well.

There are about 46,000 Lexus RX models on UK roads, including 2,800 sold in 2016, but they are still comparatively rare sights compared to rivals.

This exclusivity, the engineering excellence, and everyday practicality of the Lexus RX450h means it is still a model other makers aim to beat, even if they never catch up.