Audi took a step back to go forward with the second generation R8 Coupe.

Originally launched in 2006, the model shot to fame on back of an Iron Man film part and the legendary quattro all-wheel-drive system.

Come the new series from 2015 and Audi popped in a purely rear-wheel-drive derivative. Madness or marketing wizardry? 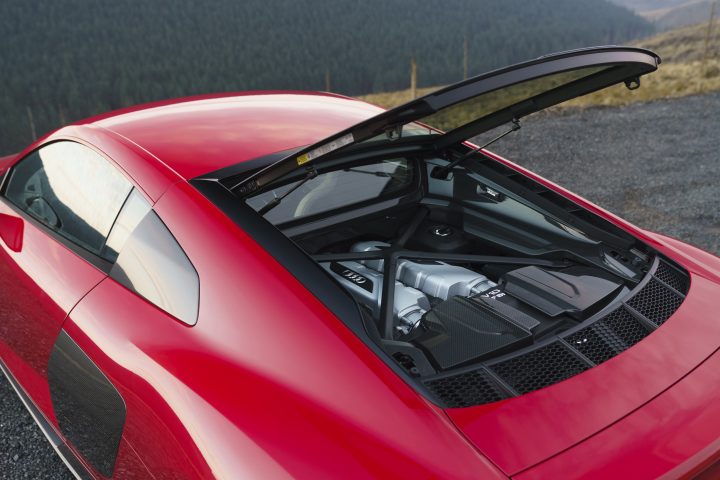 Well, being Audi, nothing is as straightforward as it seems and the reasoning behind dropping two wheels off the power platform of the boosted 570psV10 was to put more into the rear rubber ware.

More in this case means driver fun and engagement is delivered in greater quantities for the increasingly popular track days that owners jump onto to exploit and explore their cars when public roads are jammed or just too dangerous to use. 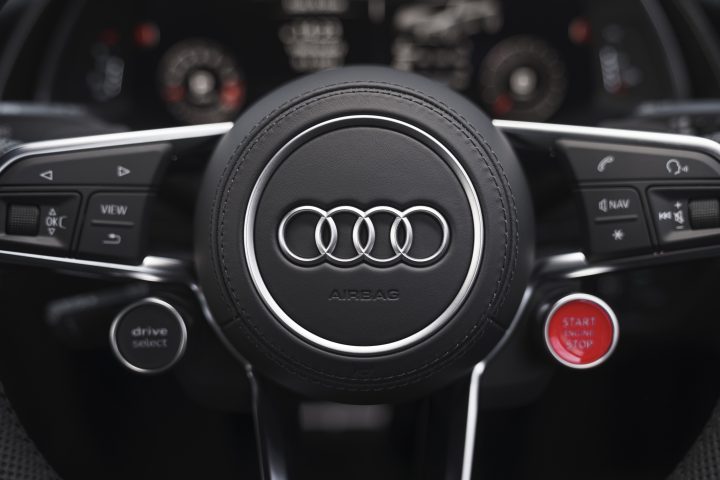 At least with a circuit you may merely run wide or spiral into the grass without too much damage. Not that you’d want to blemish the bodywork of the £128,510 car we tested.

To all intents and purposes it looks like a quattro but close examination reveals the lack of badging to that effect and you save a wedge of wonger with just RWD under foot. 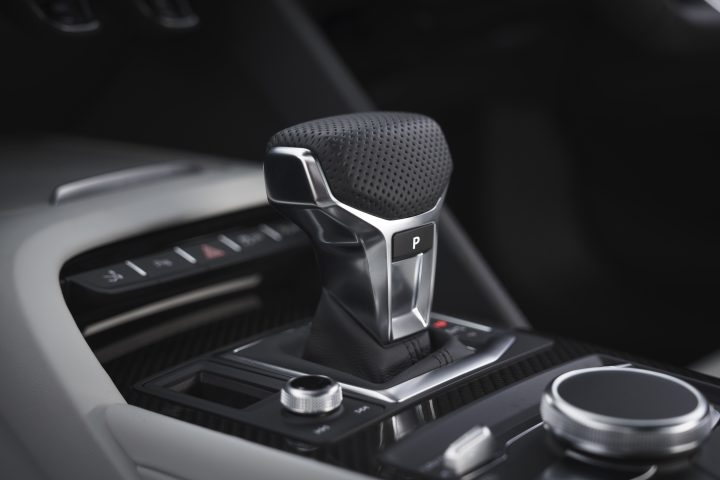 Audi has added a slightly sharper GT Performance model to the line up and of course it still highlights the quattro coupe and spider or open-topped versions, but we have already tested those and were really impressed.

So it was back to ‘basics’ for the latest model, but in reality there are few basic items on its list of fixtures and fittings. 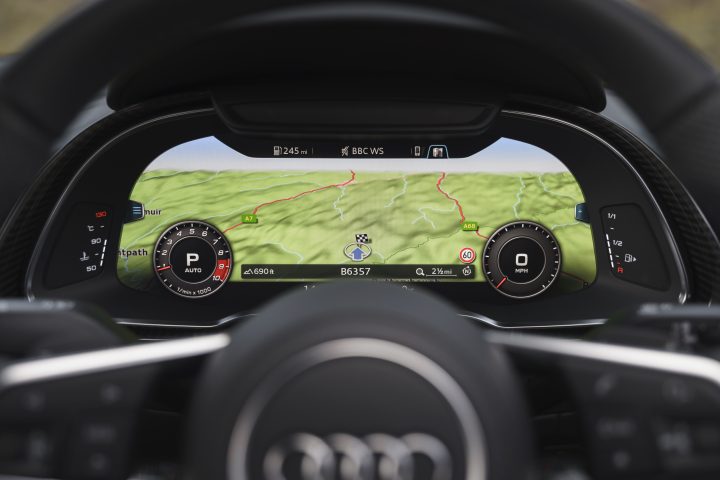 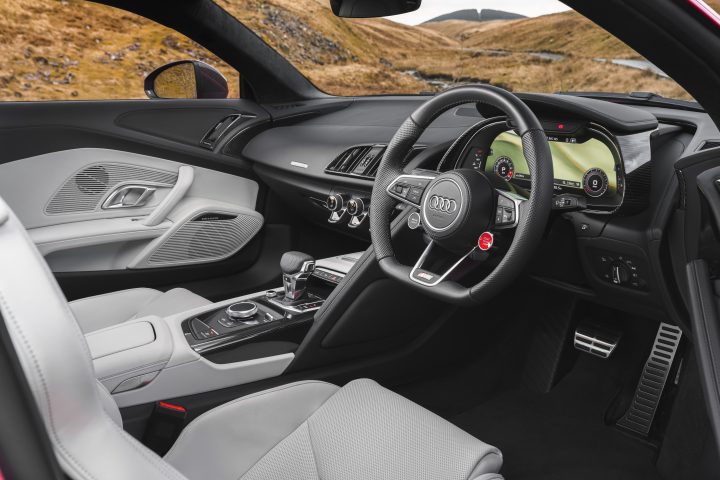 With environmental changes forcing developments this is the last V10 engine from Audi and it is going out with a scream at high revs. It fired up immediately at a push of the red button on the steering wheel the noise was deep, rumbling and intensified as the revs increased with acceleration.

Truly seamless changes through the seven-speed box meant there was no hesitation in power delivery and downchanges were accompanied with a crackle from the massive exhaust pipes.

You don’t really appreciate how quickly it accelerates because of this smoothness unless you floor the throttle and you’re thrust back into the padded seats, but the legal limit shoots underneath in about 4 seconds, the motorway cruise is a dawdle and you still have a maximum over 200mph for those lucky enough to get onto a track.

Mid-range punch is also there for overtaking and the roadholding and sharp handling are appreciated at any speed. Brakes were awesome in efficiency with just modest pressure alone.

Damp surfaces can make the car feel a little edgy in a way that the quattro system shakes off but careful use of the throttle keeps it all well controlled and enjoyable nevertheless. The front can run wide on tighter turns but lifting off instantly brings everything back on line.

The ride tends towards firmness and some bumps can intrude the cabin as the big wheels and tyres are low profile but generally it was compliant and composed.

Seats are really well shaped and supporting with a good adjustment range but those over six-feet or 1.83 metres may find the legroom and headroom restricted in the coupe and getting out needs some consideration.

Oddments room was very limited and the bootspace really suitable only for a soft bag, some clothing, or as I told one passenger, “….a platinum credit card and thong.” 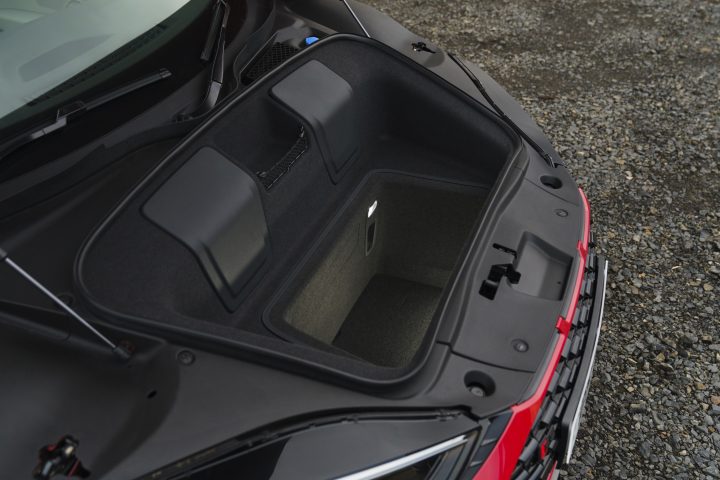 For the driver, the virtual fascia display dominated the interior and its selectable displays were clear and quick changing so you could prioritise what you wanted to see and use. Everything was easy to use and understand, including the separate infotainment and phone information.

The major controls came straight to hand and foot, the secondary switches were tightly grouped on the spokes and stalks, and all worked very well. 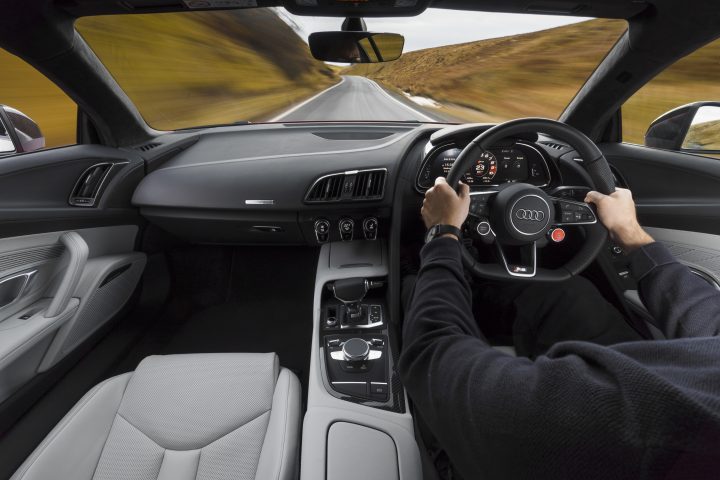 Being so low slung and with thick roof pillars the visibility was an issue for some situations and you tend to rely on the camera and sensors when parking or manoeuvring but a good wash/ wipe system and very bright long range self-dipping headlights matched the car’s forward potential.

The ease with which the Audi R8 Coupe RWD did everything was probably the most impressive feature.

It is one of those supercars for today, if not tomorrow, and we will all need to take a step back to enjoy the experience. 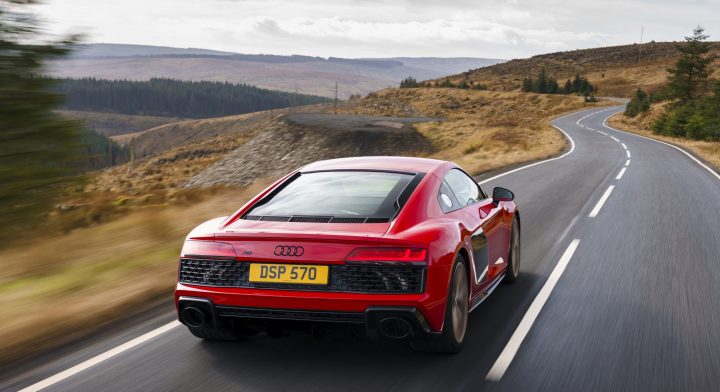