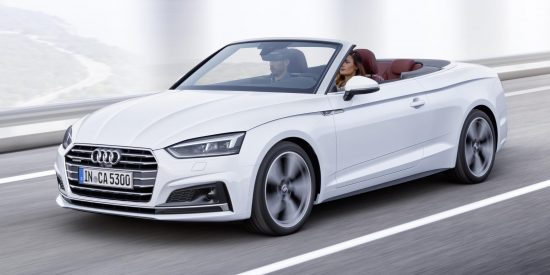 Audi know a thing or two about successful niche marketing, and the revised A5 Cabriolet is a brilliant example of the brand doing what it does best, but at a price.

It’s not cheap but its very, very good and the range is extensive and comes with a lot of tempting options which you have to very carefully pick over to ensure you get exactly what you want.

Revised in 2016, the A5 Cabriolet four-seater is now lighter, larger inside with added comfort and convenience features including seat belt microphones, one touch powered fabric hood and front or four- wheel-drive with a choice of seven petrol or diesel engines, all based around the packages for the A5 coupe.

More significant changes have been made to the front and rear suspension design, steering and chassis to make it more rigid but also lighter at the same time as improving roadholding and handling.

The beefy turbo-charged petrol engine was an instant starter, pulled well from low revs and through the gears without any audible complaint or sign of hesitation in the 1,710kg test car.

Changes were silken and swift whether going up or down the box and in a slick movement you could use column-mounted paddles or the gearstick to make manual changes if preferred without losing any refinement.

Without trying we averaged 35mpg while at steady motorway speed we saw it heading towards 40mpg and even in town it did not dip below 30mpg.

I loved the weight and feedback through the steering wheel, the good turning circle and lack of any vibration at speed even over bad road and the brakes always inspired confidence as well as admiration for the way they effortlessly slowed the car with utter control and the parking brake held it on a our regular test slope.

The new suspension has given the car sharper handling and better control while the longer wheelbase and wider track improve the ride quality and our test car had the optional individual settings system for the ultimate in personal taste.

With a quick-folding big hood you lose a little vision to the rear when in place but it’s not much thanks to the low waistline and big window. It’s the slow wipers in heavy rain at motorway speed which were of more concern to me. Lights are bright, far reaching and their LED beams clearly define the road and hazards ahead without blinding oncoming drivers.

Inside, the driver has an enormous amount of information before their eyes and fingers with the optional active instruments display tailored to particular requirements, with large and small gauges as selected, and all were clear and bright in any light conditions. 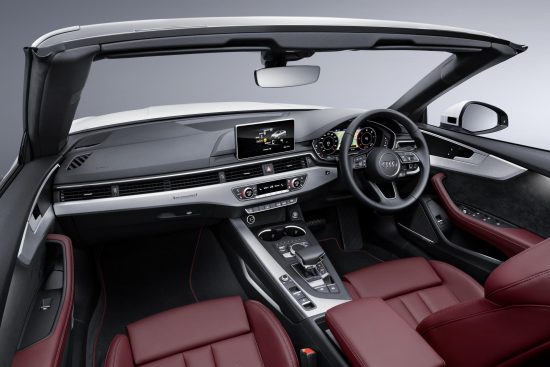 Column stalks controlled most-used secondary features, with additional buttons or rotary controls on the centre console, the infotainment display or on the lower edge of the fascia. Once you get used to the positioning and roles you appreciate their effectiveness.

Heating and ventilation was very good, particularly when the roof was down and you could have warm air throughout to feet as well as heated seats for the colder but bright winter days. It was a powerful, well directed and sensitive system and with the hood latched down it was very warm inside.

The bootspace was good but not massive. You have to load items carefully to maximise the capacity available and the ability to drop the seat backs was useful to simply increase the load area. 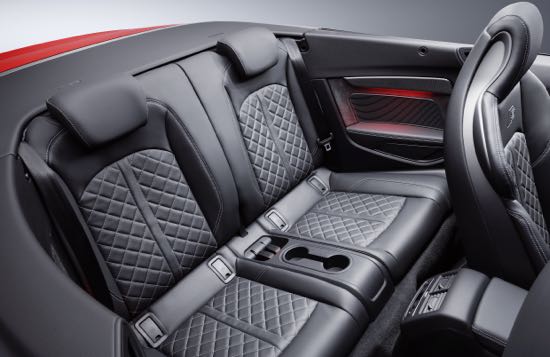 Getting into the back seats (the S5 is shown left)  was not too difficult thanks to the big doors and electrically moved front seats and once seated the room in the back was good for anyone up to teenagers and even headroom as generous with the roof closed.

Infront the head, leg and elbow room were all very good and you could easily tailor the steering and set the memory for that and seats. Oddments space was adequate but not generous with some space lost to the shaping of the door bins so you settled for the trays and recesses on the console and a small bin between the front seats. 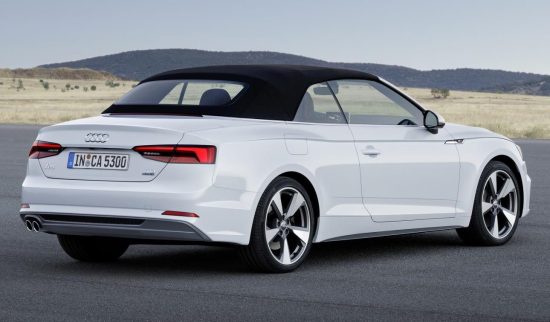 There are not many four-seater convertibles on the market while there are more 2+2 types or simple two-seaters and they come in with a stiff price ticket.

You really have to decide if you want and will like a convertible four-seater, but the Audi A5 Cabriolet range gives you the additional choice of a four-wheel-drive transmission for bad weather roads without compromising sophistication.

It really is an open or shut case in favour of the Audi A5 Cabiolet 2.0 quattro.