You are here: Home / First Drives / Weekend roadtest : Audi A4 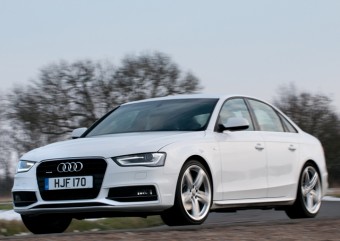 The iconic A4 has helped Audi stay in the black, but now it’s going greener for 2012.

The Audi Group once again set records for deliveries, revenue and key earnings data in 2011. The brand with the four rings sold more than 1.3 million cars in the past year, at the same time increasing revenue to €44.1 billion.

Operating profit for the Audi Group rose to over €5.3 billion in the past fiscal year and return on sales climbed from 9.4 to 12.1 per cent.

Rupert Stadler, Chairman of the Board of Management of AUDI AG, said, “Never before have we had such a large increase in deliveries in a single year. 2011 was the most successful year in the history of our company. We want to continue on this path in 2012 and grow more strongly than the market as a whole.”

Experts expect the overall car market worldwide to grow by around 4 per cent this year.

The last 12 months were a record for Audi with regard to all key performance indicators. For example, the number of Audi vehicles delivered increased by 19.2 per cent or approximately 210,000 to 1,302,659 (2010: 1,092,411). It made even more from its premium large car and cross-over series than before but at the same time it has benefitted from expanding at the other end of its range as well.

In the middle of them all sits the benchmark Audi A4 and now the eighth generation of the series since the Audi 80 in 1972 is being delivered to customers who started placing orders back in November 2011. 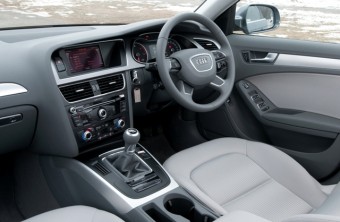 Outwardly the new series is not drastically different to the previous generation save for new front and rear end restyling and some tactile changes to the cabins to refresh them and the trim packages are the familiar comfort orientated SE , SE Technik for info-philes, performance packaged S line and top level Black Edition. The higher performance RS version comes in September.

It is under the bonnets and platform that the real changes have been introduced for this eighth generation line up of Saloon, Avant and allroad, now optimised to be less polluting and more fuel efficient throughout with start/ stop as standard and the options list runs to Google Earth mapping and in-car internet access.There is a comprehensive nine-engine range of petrol and diesel units with turbos and direct injection. All have been optimised for lower emissions, and therefore less tax when used as company cars, and there is the added benefit of improved economy as part of the overhaul.

There is an average 11pc economy improvement across the range but it can rise to 21pc.

The petrol range begins with the familiar 120ps 1.8 TFSI but there is a substantially reworked version of the same capacity with better valve control, fuel injection and warming so power rises from the previous 160ps to 170ps with a significant jump in torque to 320Nm from 250Nm before and emissions are cut 21pc to 134gkm and overall economy is tested at 49.6mpg. The 211ps 2.0 TFSI completes the new line up as the 3.2V6 is dropped for this series.

Most changes are made to the six TDI engines with four or six cylinders, developing 136ps and 163ps in four-pot form and produce 112gkm and 115gkm respectively. Economy is said to combine at 65.7mpg and 64.2mpg for these and exclusively with manual transmissions.

Opt for the six speed automatic transmission and they come with 143ps or 177ps 2.0 TDI engines and the V6 3.0 with 204ps returns 57.6mpg in front wheel drive format while a 245ps version is fitted to the Quattro Saloon, Avant and allroad models.

Engineers have very carefully revised all the ratios in the boxes for their chosen engine matches and to give good pick up from low speed with long legged economy at higher speed.

Electromechanical power steering is new to all variants, doesn’t use power straight ahead to cut emissions, but has a biase towards handling on twisting roads.

Suspension is fairly conventional by links and springs but the optional Audi drive select adaptive system alters throttle, changes, steering and even air conditioning as you roll through comfort, auto, dynamic and efficiency modes. The system permits further fine tuning and sharper responses with the optional navigation system fitted.

The Saloon boot provides 480 litres, rising to 962 litres with seats down while the Avant and allroad give up to 1,430 litres.

Taking in all the permutations there are over 110 possible A4 models in the price list. 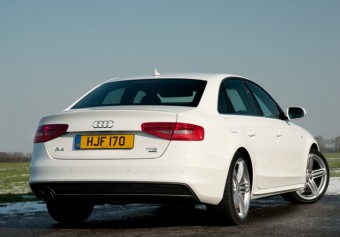 Audi anticipate the best selling model with over a third of the new A4 sales will be the 136ps variant and we tested the SE 6sp manual Saloon with its now lowered 112gkm output and a suggested 65.7mpg.

The hour long test over a mixture of motorway, A and B class roads including some built up areas saw us return 53mpg and I believe you would struggle to reach 60mpg let alone more. Little changed from the outside, much done underneath.

The smoothness and sophistication of the controls is noticeable, the clutch is light, gearchange direct and the steering has good feedback while the brakes are strong and smooth.

I found the conventional suspension surprisingly firm by contrast to the rest of the car and it did not roll around corners or dip under hard braking or acceleration.

Because of the Audi A4’s mechanical refinement, the road noise was thrown into relief on bumpy sections.

Room is good in the front, more restricted behind, and the boot is reasonable but did not include a spare wheel on our test model.

I liked the trim, the room for small items, and the very clear and clean instruments.

What the 136ps model lacked in get up and go unless you used the six speed box to its potential, was there in abundance with the 163ps version tested next.

This was an easier performing Avant derivative, also in SE trim, and it had a proper spare wheel as well. The loadbed is available from knee-height, the fifth door opens high and yet not too far up for shorter users, and the initial capacity is good, quickly rising as the seats drop down.

The power flows with greater immediacy and the six-speed box is a very good match with its quick action and overall I managed to touch 50mpg, even further off the 64.2mpg official combined figure. It was just a better drive for me.

Road noise was still intrusive over some surfaces and this is often the case in an estate without a sold rear bulkhead, but it handled nicely and accurately and is my preferred choice in A4 styles.

Visibility is good whether you are in Saloon or Avant with slim pillars, deep windows and good wipers.

The new Audi A4 will delight existing owners of the out-going series, and it is a strong pull for newcomers to the brand, particularly those driven by having to consider running costs and tax implications.