You are here: Home / Featured / Tears and cheers as WRGB begins 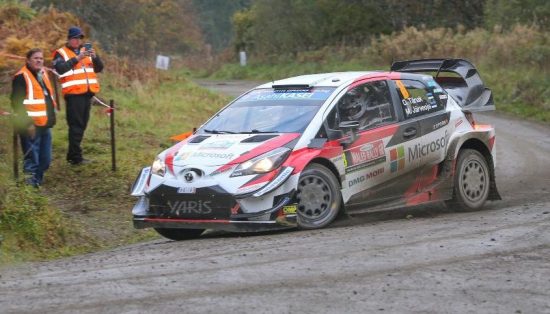 The world’s leading rally drivers treated fans to an awe-inspiring display of high-speed thrills and spectacular slides through the legendary north Wales forests and there was something for spectators to celebrate with the coronation of a homegrown British champion on the first full leg of Wales Rally GB.

From the fast, smooth challenge of Clocaenog to the picture postcard Brenig, the bumps and jumps of Penmachno’s ‘Cresta Run’ and the new fan-friendly, multi-surface Slate Mountain test high up in Snowdonia, the action was fast-and-frantic right from the outset.

History was made on Brenig and Penmachno as closed British roads were used for the first time in a World Championship motor sport event in the UK, creating fresh challenges for competitors and serving as a precursor to Sunday’s eagerly-anticipated, ground-breaking Llandudno Great Orme Street Stage.

The WRC’s form man, Toyota’s Ott Tänak (above), maintained his recent momentum as he set a blistering pace, winning five of the eight stages to hold an advantage just shy of half-a-minute going into today.

There was better news for home fans as Llandudno-based Matt Edwards popularly clinched the Prestone MSA British Rally Championship crown. Now the pressure is off his back, the Welshman will go out all guns blazing in an effort to sign off the season in style with a fourth triumph of 2018 in the weekend’s concluding round.

Just outside of the top ten, a trio of hard-charging Brits fill positions 12th to 14th overall, with Gus Greensmith sitting third in the supporting WRC2 class, ahead of rapid privateer Tom Cave and former British Champion David Bogie, who won the first of the weekend’s two BRC rounds in his Skoda Fabia.

Today, the action moves to mid Wales and some of the most classic speed tests on the WRC calendar for the gruelling ‘Super Saturday’ schedule, with the likes of Myherin, Sweet Lamb, Hafren, Dyfi and Gartheiniog sure to shake up the order and spring a surprise or two.

Sunday morning sees two forest tests in scenic Snowdonia, before the thrilling finale on the streets of Llandudno. In Visit Wales’ ‘Year of the Sea’, crews will race around the iconic Great Orme and then onto the closed streets of Llandudno. The flying finish will be on the resort’s famous seafront, before the winners are crowned on the Promenade.