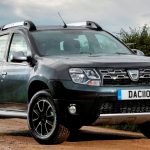 Dacia, pronounced ‘dat-cha’, is a Romanian automotive brand that became wholly owned by Renault in 2004.But it wasn’t until mid 2012 that the first Dacia model from the new partnership, the mid-sized Duster five door mid-sized SUV, appeared in the UK with sales beginning early in 2013. Since then there have been constant updates and additions to the line-up and in 2014 production … END_OF_DOCUMENT_TOKEN_TO_BE_REPLACED