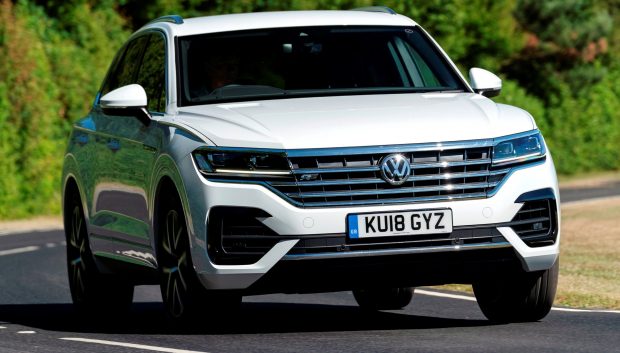 The trials and repercussions of  the Volkswagen Group brands over emissions have been well documented  but didn’t stop them becoming the world’s largest manufacturer of vehicles with 10.74-million vehicles produced last year and 4.1-million sold so far this year, writes David Miles.

However for annual top-dog global sales it’s a close run thing with the Renault-Nissan-Mitsubishi Alliance for the world’s top spot. Volkswagen Group has 50 factories situated in 14 countries producing vehicles.

In the UK so far this year VW has sold 157,685 new cars, a fall of 4.6% over the same period last year in a new car market down by 7.5%. The VW brand in the UK is the second highest selling after Ford but now well ahead of Vauxhall.

Much of the VW brand’s sales impetus has come from introducing a wide range of new models. Already this year we have the new Polo supermini, T Roc compact SUV, Tiguan Allspace 7-seat SUV, Polo GTi, up GTi and now the Touareg large SUV.

Commenting about the new third generation Touareg he said, “It is our flagship SUV, indeed it is probably now the flagship model for our whole range. It is the pinnacle of VW’s car making abilities today. It has all the latest technology, equipment, comfort and refinement that are available making it our most complete car ever.”

The Touareg first went on sale in the UK in 2003 and last year 3,689 units were sold in the UK and 45,594 have been sold since it was first launched out of a one-million global sales total.

Now on sale the third generation Touareg will be available with a range of potent V6 engines coupled with an eight-speed automatic Tiptronic gearbox and 4Motion all-wheel drive. Initially the five-seater large SUV is available with a 3.0-litre V6 286hp turbodiesel engine, likely to be the best selling unit, and soon a 231hp version of the same engine will arrive. A 3.0-litre V6 340hp turbo petrol engine will be available to order later this year and to come potentially next year is a 367hp plug-in hybrid powertrain.

The new model is available with SEL, R-Line and the new likely best selling R-Line Tech specification levels. The fleet/retail sales split is expected to be around 60% fleet and the petrol/diesel engine split when all engines are available next year will be 80% diesel.

On-the-road prices range from £48,995 for the forthcoming 231hp turbodiesel with SEL equipment up to £58,195 for the 286hp turbodiesel with the top new R-Line Tech spec and that is the version likely to be the best selling model overall and the model VW UK provided for us to test drive.

A current PCP offer for this top spec version includes a deposit contribution by VW of £3,000 and that result in a £499 monthly payment fee over three years.

The new Touareg sits on the VW Group’s modular longitudinal matrix (MLM) platform used for high end models. It is wider and longer than before with a length of 4,878mm (+77mm), 1,984mm wide (+44mm) and 1,717mm high (-7mm).  The five doors, five seat design offers a 1,051mm load length with 810-litres of boot space with all five seats raised and 1,800-litres with the rear seats folded down. The rear seats can slide by up to 160mm fore and aft to create more space or legroom and the angle of the rear seat backs can be adjusted in three stages up to 21-degrees.The kerb weight is 2,070kg and it has a maximum braked towing weight of 3,500kg.

The exterior dimensions give a well balance look to the vehicle, certainly it’s big and bold and makes an impressive statement in kerb appeal terms but perhaps there is too much brightwork to the wide front grille to be subtle; sometimes less in more in premium brand styling terms. 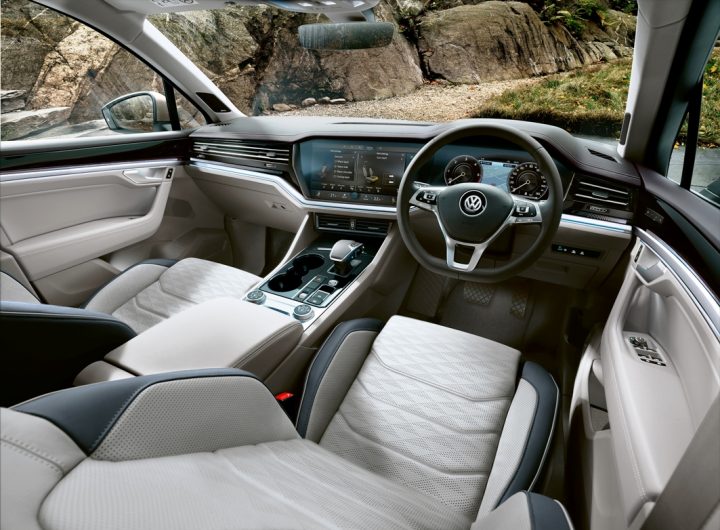 Inside it’s probably the highest perceived quality the VW brand has achieved. It looks and feels premium class with big comfortable and supportive seats in leather upholstery with contrasting stitching. Top spec versions, or as an option on other versions, is a new Innovision Cockpit design.

Whichever version is chosen the level of spec is comprehensive and  includes the now usual driver support systems including alert, partly automated steering, emergency braking are available and much more; too much in fact to include in this brief first UK test drive review. 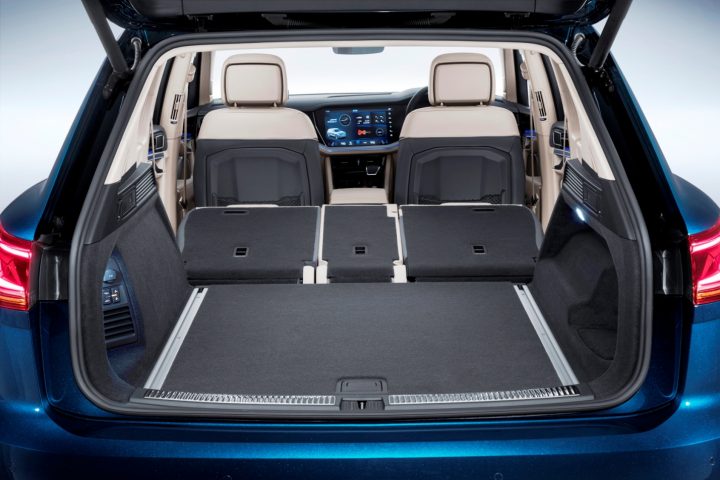 Under the skin changes include new anti-roll bars electro-mechanically controlled to react to different cornering speed. My test car was fitted with the air-suspension and rear wheel steering and together with Dynamic Chassis Control, an extra £2,370, it’s probably a worthwhile addition as the handling and ride were impeccable for such a large vehicle.

The 3.0-litre, V6 TDI 286hp turbodiesel engine is a real gem and provides uncompromised muscle with torque of 600Nm from 2,250rpm. Drive to all four wheels is through the 4Motion system is via an eight-speed Tiptronic auto gearbox which works seamlessly with the high torque engine. The system includes a centre differential lock with asymmetric dynamic torque distribution controlling the flow between the front and rear axles of a maximum 70% to the front and up to 80% to the rear axle. This helps with cornering stability, acceleration and of course with a useful amount of off-road driving capabilities. 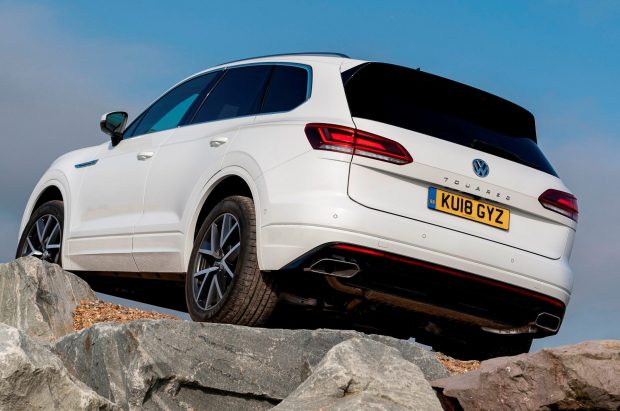 Overall the new VW Touareg large SUV is very impressive in all areas especially in driving refinement. I found it eerily quiet with very little noise from the engine transferring into the cabin even during hard acceleration and whilst cruising at 70mph it was virtually silent and the road noise was just as low.

Against: No 7-seat version, ungenerous warranty, gets expensive if too many options are fitted, my test drive fuel economy was not close enough to the supposedly new and more realistic WLTP official figure.