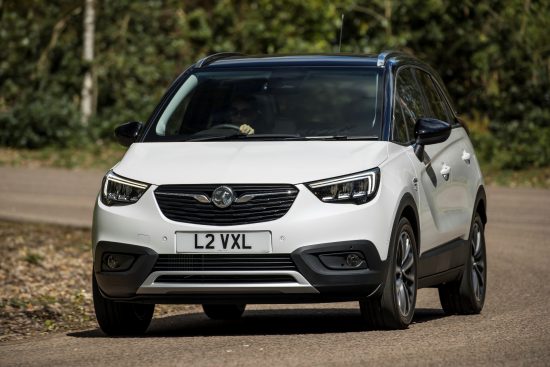 Such is the demand for compact B-segment five door Crossovers or SUVs as sales are booming, why just have one model range to offer when you can have two?

Vauxhall point out that the Mokka X is very much designed to look like a traditional SUV with chunky styling and with the choice of 2WD or 4WD models. The Crossland X however is more family-focussed for the urban environment; it has a softer exterior styling and offers just 2WD models at considerably lower prices. It would be fair to assume that the Crossland X is the replacement in the Vauxhall range line-up for their Meriva compact MPV. Sales of MPVs are diminishing and Crossover/SUV sales are booming so it’s a logical move.

Rather than traditional butch looking SUV high-of-the-ground styling adopted by the Mokka X, the Crossland X has a lower waistline giving a larger glass area, elevated seating and more room overall inside for family use. It has smaller wheels and a less elevated ride height but still taller than a familiar supermini sized hatchback. It is just 19mm shorter than the Mokka X yet the boot space with the rear seats in use is 410-litres, that’s 54-litres more than the Mokka. However fold down the rear the seat backs and the Crossland has 1,255-litres of cargo space against the 1,372-litres offered in the Mokka.

I can just see customers scratching their heads as to which compact Crossover/SUV to opt for when choosing between a Crossland X or Mokka X; price might be the decision maker unless 4WD is a must-have. 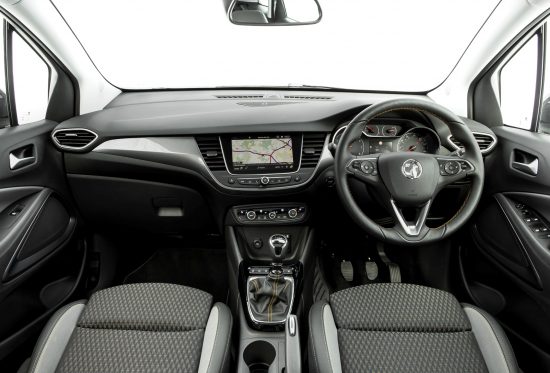 Both model ranges are well equipped with the latest driving aids, safety equipment and with Vauxhall’s OnStar and IntelliLink connectivity and infotainment systems compatible with Apple CarPlay and Android Auto. Whilst the Mokka range has the option of 1.4 turbo and 1.6i petrol engines plus 110 and 136hp turbodiesel units and manual/auto gearboxes, the Crossland X has 1.2 normally aspirated 81hp and 1.2T turbo petrol units with 110 and 130hp outputs plus 1.6 turbodiesels with 99 and 120hp outputs.

Another difference between the Mokka X and the newer Crossland X, is the latter is a product from the new partnership between Vauxhall and its new owners the PSA Peugeot-Citroen Group.   The Crossland X uses the same platform and engines as Peugeot’s very popular 2008 Crossover/SUV range. Other competitors will be the Renault Captur, Nissan Juke and Suzuki Vitara to name just three, but there are more on their way to satisfy a booming market.

My test drive Crossland X model was the 1.2T 110hp ecoTEC S/S (stop/start) turbocharged three cylinder direct injection petrol powered version with a five-speed manual gearbox with the base SE specification priced at £17,875 which I would consider to be the best buy in the range.

However my test car also had numerous extra cost options such as the £680 rear view camera pack which was very useful for parking, the £710 sat-nav system, a £110 spare wheel which should be standard fit, premium LED lighting pack at £695, 17-inch alloy wheels at £100 and Brilliant Paint at £285 making the total cost of this vehicle a not so appealing £20,455.

As always my advice is to stick with the standard spec and only choose the options you really need. One of those might be £300 Versatility Pack which gives greater seating flexibility. It provides 40/20/40 split rear seats mounted on runners. Pushing them back gives more legroom for six-footers but you can slide the rear seats forward to increase the load space when required and still leave room for the toddlers. Unfortunately you have to upgrade to the Elite spec to gain the height-adjustable boot floor that makes loading and unloading easier. 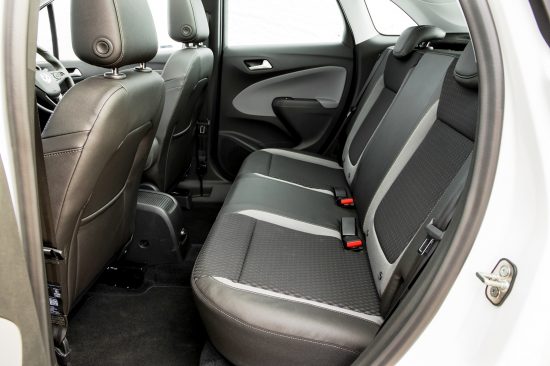 Generally the interior is pleasing to look at but there are large areas of hard plastic trim so it’s more functional and durable than classy. The controls and instruments are conventionally laid out and thankfully the heating and ventilation controls are mounted in a centre stack and not hidden in the touchscreen system.

Most annoyingly the Lane Departure warning system comes on every time you start the car. I prefer not to use this intruding system and had to keep switching it off but the button, along with others, was hidden behind the gearlever. 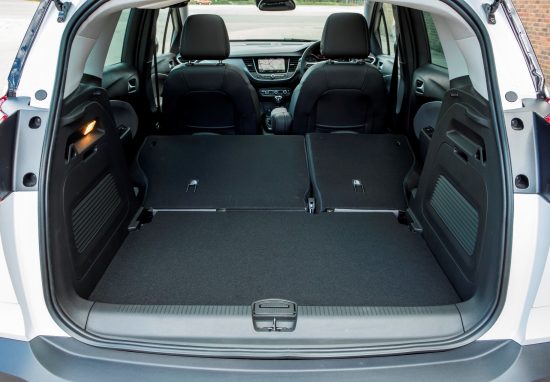 With good visibility from the elevated seating positions and a good amount of flexible easy to use load space the Crossland X is a well packaged vehicle and would easily meet the requirements of young couples with or without children either as a main or second car and of course those older empty-nesters who want just one versatile easy to live with economical mode of transport.

The 1.2T 110hp ecoTEC three cylinder direct injection petrol engine from PSA Peugeot-Citroen, known by them as PureTech, is highly rated and winner of numerous Engine of the Year awards. By choice I would choose the 130hp option out of this family of triple cylinder units which has a bit more ‘oomph’. But the 110hp unit on this occasion is satisfactory enough and coped well with urban traffic and cruised happily and quietly at motorway speeds. With 205Nm of torque from just 1,500rpm the engine is good for response and smoothness accelerating from low in-town speeds without hesitation up to cruising speeds on more open roads. Top speed is a more than ample 117mph and the zero to 62mph acceleration time is 10.6-seconds.

The fuel economy varied considerably during my week long test and 38.7mpg was the average for in-town travel but 47.8mpg for open road cruising giving an overall average of 43.2mpg.

At this point I should say that the weather was very hot and the air-con was on all the time and for the most part the car was fully loaded coping with family travel. I would expect around 45mpg to be a realistic average but this would still be well short of the official EU Combined Cycle figure of 57.6mpg.

When it comes to handling characteristics and ride comfort the Crossland X performance was variable. In-town it was neat and nimble but with the ride comfort compromised due to impacts felt in the car from potholes and broken tarmac and I would not suggest going for the larger 17-inch wheels as fitted to my test vehicle. 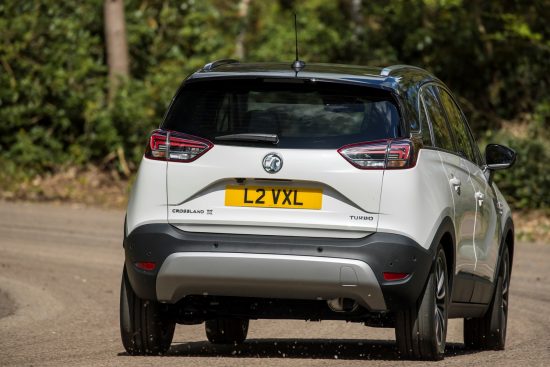 The ride was far more comfortable on open roads but probably too much on the soft side causing considerable body roll during cornering. Fully loaded the vehicle moved from front end understeer rolling through to rear end oversteer during cornering.

Although it uses the same platform as the Peugeot 2008 Crossover the Vauxhall Crossland X is no match in the handling and surefootedness department as its French rival so the overall driving experience is not as good as it could be.

Against: Not as classy as the Peugeot 2008 for the quality of the interior trim, the handling on open roads is not as controlled or as precise and nimble as it is in urban traffic conditions, no height-adjustable boot floor or spare wheel fitted as standard to this SE spec level.