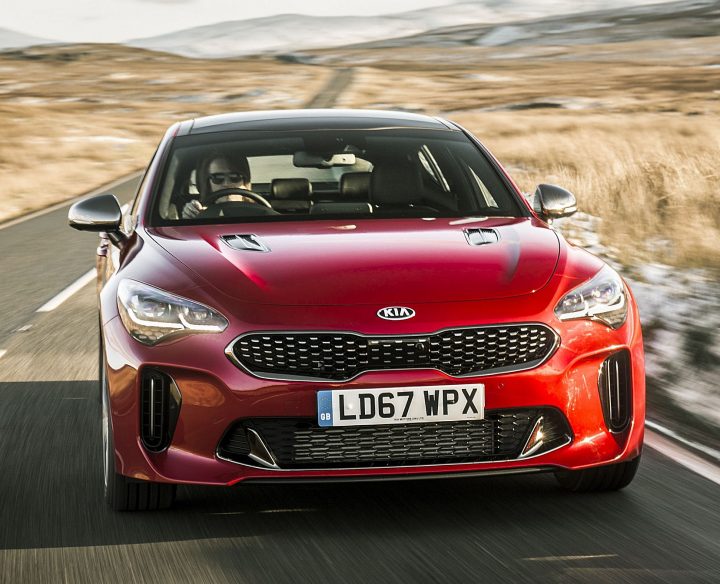 Kia is rapidly rolling out its range of new executive sporting models with the Stinger series now getting a 2.0 turbo-petrol alongside the initial 3.3V6 petrol, and a 2.2 diesel is due very soon, writes David Miles.

Kia’s impressively styled Stinger five door Grand Tourer arrived at the end of last year powered by a 3.3-litre twin turbo V6 T-GDi 365hp, 500Nm petrol engine and I recently  reviewed this version with its £41,140 price tag and exclusive to this engine, GT-S specification. More engine options were promised and now the Stinger is available with a 2.0-litre T-GDi four cylinder turbo petrol unit which supplies 244bhp and 353Nm of torque with prices from £31,995.

Later this month the engine line-up will be completed with the arrival of a 2.2-litre, four cylinder turbodiesel unit, the same as used in the new Kia Sorento large SUV, with 197bhp and 440Nm of torque and priced from £33,895.

Both the 2.0 petrol and 2.2-litre diesel models are available with GT-Line and GT-Line S specification levels. All versions are covered by Kia’s seven year 100,000-mile warranty.

What is also common to all models is an eight-speed automatic transmission fitted as standard and they are all rear wheel drive. Not only is the Stinger Kia’s first rear wheel drive car it’s also their fastest   with the 3.3-litre V6 version having a top speed of 168mph. Meanwhile the 2.0-litre petrol still offers 149mph and the 2.2-litre diesel is not far behind at 143mph.

Ian Mathews, Kia UK’s Head of Product said at the recent media launch of the 2.0-litre Stinger that they had a sales target this year of 1,800 to 2,000 units with the demand for the three engines likely to be split evenly. He estimated 60% of sales will go to retail customers and the rest to business user-choosers and they are likely to opt for the diesel engine because of the greater fuel economy and lower Benefit-in-Kind tax costs. Whilst the 3.3-litre unit has a Combined Cycle figure of 28.5mpg and CO2 at 225g/km, the 2.0-litre petrol unit’s figures are 35.8mpg and 181g/km and the diesel’s 48.7mpg and 154g/km.

Kia’s current advertising theme is ‘The Power to Surprise’ and with the arrival of the Stinger that is certainly true. The stunning to look at Stinger is the latest result of ex-Audi designer Peter Schreyer move to the Kia and Hyundai brands and that has been further enhanced by the recruitment of ex-BMW M division’s chassis and vehicle development guru Albert Biermann joining the team. All they need to do now is to get a German brand ergonomics expert to sort out the design and layout for controls and switches.

The Stinger has an overall length of 4,830mm and it enjoys a long wheelbase of 2,905mm which all leads to an imposing five door coupe styled GT car.

Its styling is fully backed up with muscular wheelarches, a low stance, coupe roofline, sculptured door panels, a sleek new version of the Kia Tiger Nose grille, long bonnet, air flow vents in the front lower bumper and lower front wings with air intakes in the bonnet for the intercooler.

At the rear is a sharply raked forward tailgate, a spoiler plus a lower body diffuser flanked by double twin exhaust tailpipes. 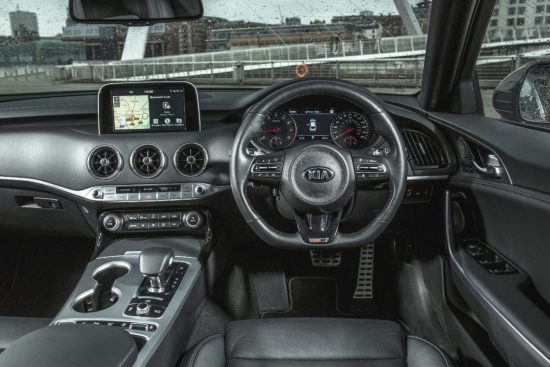 From the exterior view the 2.0-litre petrol Stinger looks little different to the 3.3-litre version I recently tested and perhaps the owners of the more powerful range flagship version might feel their model needs a bit more visual differentiation over a lesser powered model.

However 2.0-litre owners will think it’s great as they can get a virtually identical looking car for £9,000 less. The new 2.0-litre versions even have the double twin exhaust tailpipes although the disappointing feature about them is that it doesn’t give either the 3.3-litre or 2.0-litre Stinger models an exhaust note in keeping with its sports GT styling. They sound like normal saloon cars. 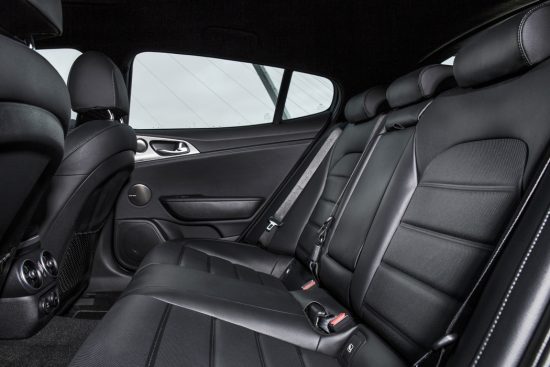 But when it comes to performance the 2.0-litre Stinger is not all ‘show’ and no ‘go’. As I’ve already written top speed is a not insignificant 149mph and zero to 60mph takes 5.8-seconds, that’s only a fraction over one second slower than the gutsy 3.3-litre.

With the eight-speed auto gearbox and an ample 353Nm of torque from 1,400rpm the acceleration is responsive when needed yet remains calm when the car is travelling on congested roads. Perhaps it will not have the stamina to match the 3.3-litre unit during Grand Tourer long fast motorway journeys but the difference in performance is marginal – unlike the price.

When it comes to fuel economy the official Combined Cycle figure of 35.8mpg for the 2.0-litre petrol model I couldn’t get close to during my brief test drive around the winding Chiltern roads and a short blast on the M40 motorway so the real-life figure was 25.1mpg.   During my much longer time with the 3.3-litre model the real-life figure was 25.8mpg versus the official 28.5mpg figure.   As is often the case a smaller capacity engine works harder and uses more fuel for the same result but the benefit is significantly lower taxation costs. 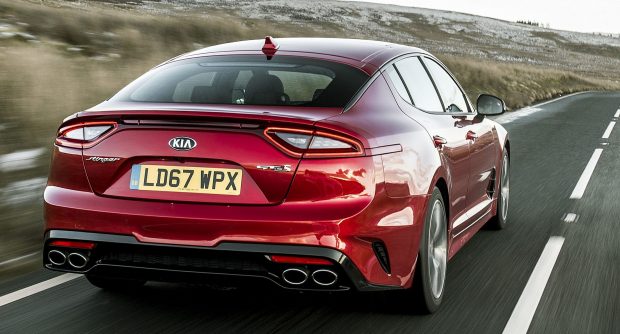 In most other respects the Stinger models handle in a similar way, well balanced with its long wheelbase and wide front and rear tracks and fast response steering rack. They are not quite as agile as their German competitors but they are less expensive.

In addition the top GT-S 3.3-litre version has Dynamic Stability Damping Control which helps offset its higher price versus other versions so the ride comfort settings are not adjustable for this additional new version.

However all versions have a Drive Mode Selector which gives five different gearshift and throttle settings and a limited slip differential for optimum traction from the two rear wheels during cornering.

Apart from that it’s hard to spot or feel the differences between the various models so true to their advertising word Kia ‘continues to surprise’.