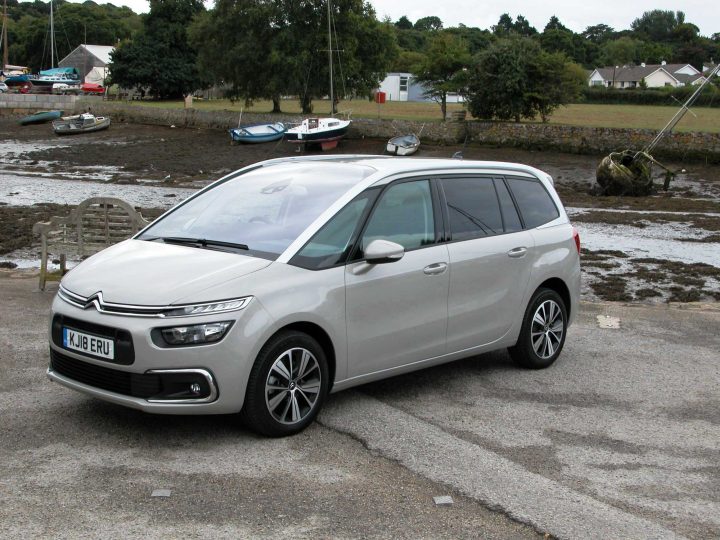 The range also includes the Citroen SpaceTourer which styling wise and sliding rear side doors looks as if it is based on a commercial van style design although like the C4 versions it uses the PSA Group’s EMP2 modular vehicle platform. This version is available in three lengths with seating for up to eight people

The name change for C4 branded versions coincides with the vehicles receiving additional user-friendly functions, the latest technologies, more personalisation features and options, Citroen’s Advanced Comfort programme and it further distances the models away from its Crossover/SUV models.

Additionally Citroen UK announced in June they were introducing a new 2.0-litre BlueHDi 160 (161hp) turbodiesel engine with Stop&Start paired with a new EAT8 automatic gearbox for all three body styles and this was the first time this new engine and gearbox combination featured in any Citroen model.

For this road test report it’s the Grand C4 SpaceTourer with family-friendly seven-seat accommodation we are concentrating on. Like its five-seater stablemate it has the choice of Touch Edition, Feel and Flair spec levels.  The engine line-up choices are 1.2-litre PureTech 130hp petrol manual and auto versions, 1.6-litre  THP 165hp petrol auto, 1.6-litre BlueHDi turbodiesels with the choice of 100, 120, 150hp output some manual – some manual and auto and the new 2.0-litre BlueHDi 161hp 8-speed automatic combination. 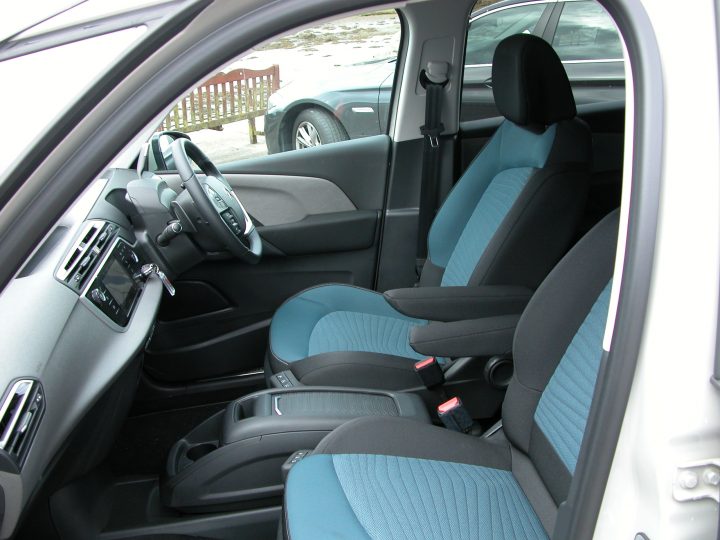 Now MPVs are not as popular as they once were with customers transferring their allegiance to the latest fashionable must-have SUV/Crossovers. But for those users that have the need for versatile seating, a more comfortable ride, high specification and still with a large practical load area, an MPV is still hard to beat.

This is especially true as they now mostly have the same car-like technologies, improved safety features, higher specification, improved trim and fixtures and handle more like a large car than a van with windows.

The Grand C4 SpaceTourer with the mid-range best selling Feel specification powered by the new 2.0-litre 160 (161hp) BlueHDi turbocharged direct injection diesel engine matched with the new 8-speed automatic gearbox was my family transport for a late summer getaway to Cornwall. And believe me we somehow managed to fill every bit of space in the vehicle most of the time even though this model has seating for seven and we were just three adults and a toddler plus all our family ‘clobber’.

The Grand C4 SpaceTourer is a big vehicle but it still manages to look smart and pretty aerodynamic with its steeply raked-back front windscreen and slightly inclined forward rear high tailgate.

The overall length is 4,602mm but it’s the width that is most noticeable when driving. It’s 1,826mm wide which doesn’t sound much different to a normal sized car or SUV but add in the large door mirrors and that goes up to 2,117mm so squeezing into the now modern-day narrow car parking slots  needed care and although the vehicle had parking sensors  it lacked a reversing camera .

This would have been useful to judge leaving suitable room to open the tall and wide tailgate when parked up to another car.  The height is 1,638mm and the wheelbase a healthy 2,840mm which lent itself to plenty of legroom for the three individual sliding fore and aft, reclining and fully folding middle row of seats.

In the rear are a further two individual seats which spent all their time folded flat to maximise the load area carrying space.   With all seven seats in use the boot space is only 165-litres, but with the rear two seats folded down there was a very good 793-litres of space and with the second and third rows of seats folded down the total cargo space goes up to a massive 2,181-litres so it would be very usable to carry long items and recreational equipment.

All seats have a high position in the vehicle so visibility is first class to the front and sides. The front two seats have armrests giving them a cabin style appearance and they were very comfortable and supportive on a long journey. On the seat backs of the two front seats are aircraft style foldout trays and there are numerous added storage areas throughout the vehicle including two underfloor compartments below the feet of the middle row of seats.

Incidentally the middle row of individual three seats are full height and full width so there is no issue re space or legroom for the middle seat passenger and no transmission tunnel to restrict legroom.  The fact that all these three seats can recline is another added and well thought out bonus. 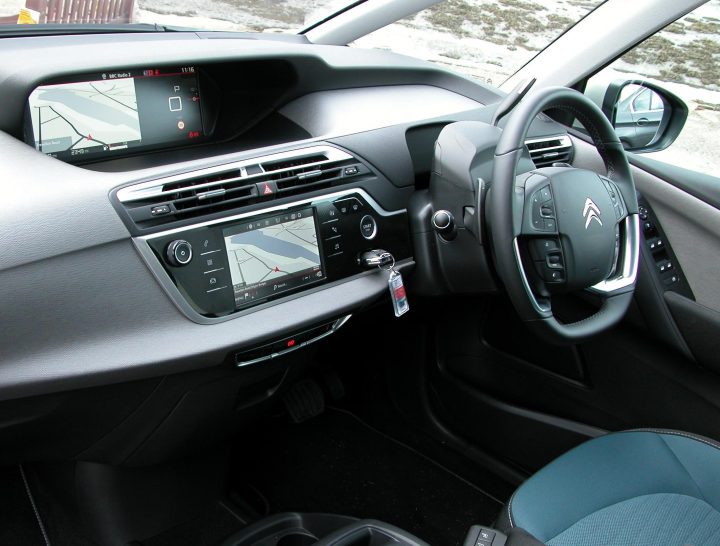 The full width dashboard has two centrally mounted screens, a 12-inch panoramic unit which shows various information and the sat-nav directions and below that is a 7-inch touchscreen which controls most of the vehicle functions, not always that user-friendly though having to use it to adjust the heating and ventilation system or air-con but it does declutter the layout I suppose.

Unusually there is no gearchange selector positioned in the centre of the vehicle, that space is used for yet another storage box.  The gear selector stalk is positioned behind and to the right of the steering wheel and it took some getting used to and it was fiddly to use. It effectively is where the instrument binnacle would be if there was one. The manual gearchanges if needed are done by gearshift paddle positioned behind the steering wheel.  An electronic parking brake with Hill Hold Assist is positioned in the centre console between the seats along with drinks holders and more storage space.

The new 2.0-litre, four-cylinder BlueHDi turbodiesel engine, labelled 160 but with an actual power output of 161hp, proved to be an impressive performer given the size of this vehicle and the potential weight it could have to carry in terms of passengers or luggage.  With 295Nm of torque available from 1,750rpmk there was always enough ‘grunt’ on hand to meet every motoring need whether it was maintaining high cruising speeds on motorways, going up steep hills or pottering around in stop-start urban traffic. 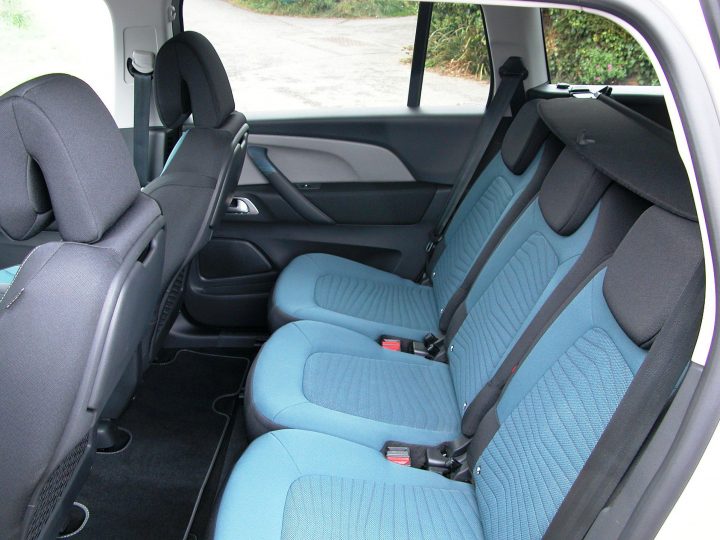 This engine is matched as standard with the new PSA Group of brand’s 8-speed torque converter automatic gearbox which is now widely being offered throughout Citroen, Peugeot and Vauxhall model ranges.   The changes are smooth and having eight ratios means there is no hard change felt between ratios.

However eighth gear is engaged based upon speed not the load demands placed on the engine. It comes into use once a cruising speed of around 65mph has been reached. Try to engage it manually at lower speeds and the auto box slips back to seventh or even sixth gear.

The higher gear ratios seem to be long-legged so it was quite usual to see fifth gear in use for country road driving and it didn’t seem to harm the fuel economy to any great extent. Because the engine is so quiet there was really no undue noise intrusion to make me feel I was driving in the wrong gear and maintaining the legal 70mph limit felt as though the engine was hardly being worked very hard at all while acceleration was also impressive.

The official new WLTP Combined Cycle fuel economy figure is 60.1mpg. Now during my long journeys the vehicle returned 50.1mpg for 500-miles of motorway and dual carriage way cruising to and from Cornwall. Then 250-miles plus of travelling using narrow Cornish winding, hilly and narrow country roads returned at worst 40mpg and the total 800-miles covered gave the vehicle an average 44mpg figure which given the load it carried and the driving conditions encountered was very impressive. 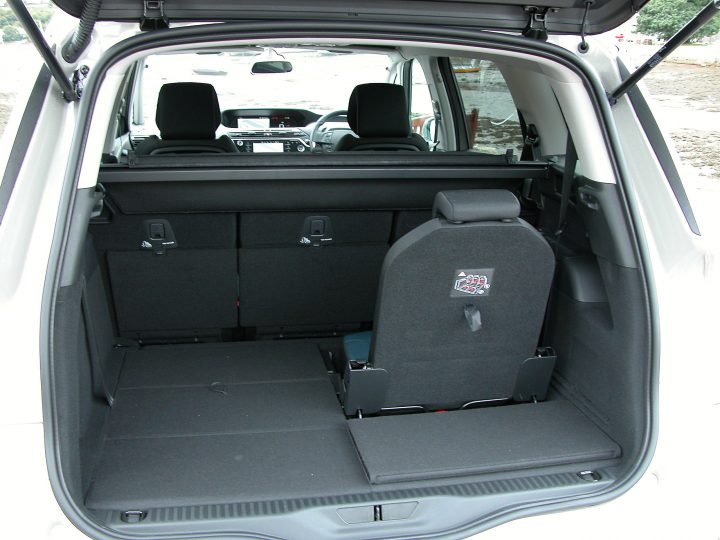 It certainly wasn’t a taxing vehicle to drive and the all important tax costs are not prohibitive either. The CO2 output is 123g/km so the diesel First Year VED rate cost is £205 before the Standard rate of £140 is applied. Company car drivers will pay 29% Benefit-in-Kind tax, insurance is Group 26E and warranty is an ungenerous 3-years/60,000-miles.

Overall the new Citroen Grand C4 SpaceTourer offers very flexible seating and load carrying combinations, the interior space is cavernous, the ride comfort generally good with only the worst impacts from potholes echoing into the cabin and the road holding generally good, better when not fully loaded as the extra weight tended to induce cornering body road mainly through the walls of the 17-inch tyres. 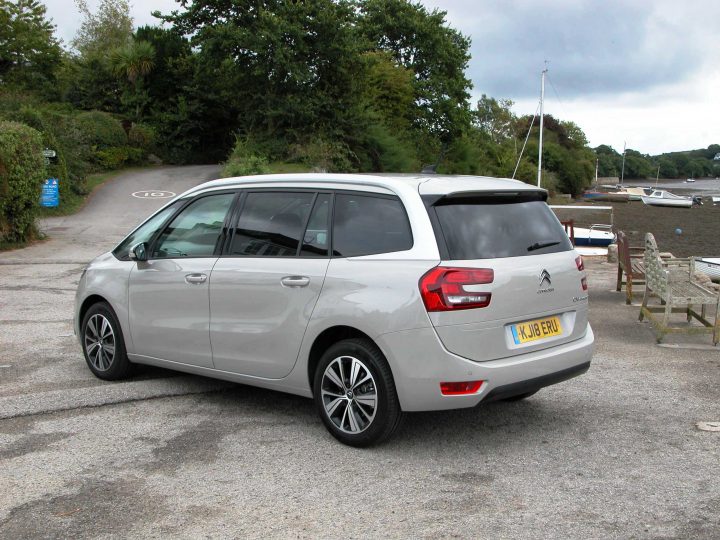 It’s a clever vehicle and although large MPVs are not as popular as they were, if you are considering dumping the less versatile and now commonplace SUV, this is the one that deserves serious consideration.

For: Cavernous  and clever packaging for a large 7-seat MPV both inside and out, high spec, strong new diesel engine and ideally matched as standard with a new 8-speed auto gearbox, good  front and side visibility, generally easy to drive, good real-life fuel economy

Against: A standard-fit rear view camera is needed given the type of vehicle this is, some bodyroll/understeer during cornering when fully loaded, fiddly layout for the gear selector, ungenerous warranty.