The third generation BMW 1 Series range of 5-door hatchbacks is now with us, writes David Miles. 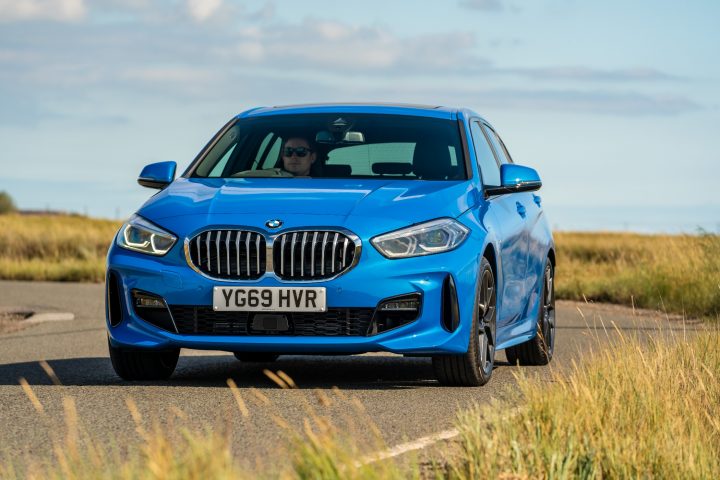 In a change from previous versions this generation is predominately made up of front wheel drive versions with transversely mounted engines which have a shorter bonnet, the cabin area moved forward within the car’s footprint and the rear seat knee room is increased with a larger boot so it’s a roomier car than before.

In line with larger new BMW models the latest 1 Series also has improved power units with improved fuel economy and lower CO2 emissions plus a new array of driver assistant and connectivity functions. Prices start from £24,430 on-the-road and run up to £36,430 plus of course there is the opportunity to add more options and option packs. Competitors include the premium brand soon to arrive new Audi A3 and Mercedes-Benz A-Class plus of course the also soon to arrive new generation Volkswagen Golf and its sibling the new-ish Skoda Scala plus many more in its size category. 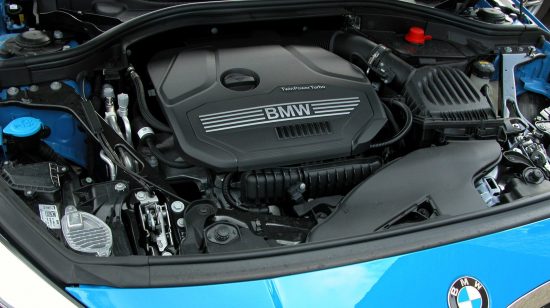 The 1 Series current line up of engines is the 1.5-litre, 118i 3-cylinder 140hp turbo petrol with front wheel drive, the Mi35i xDrive hot-shot model with 4-wheel drive with a newly developed 2.0-litre 306hp turbo petrol unit.

The main sellers to business users are the turbodiesels and these  are 1.5-litre 116d with 116hp, the 2.0-litre 4-cylinder 118d producing 150hp and the 120d, 190hp with xDrive traction. Expect more engines and electric variants to be added to the range in due course.

Depending on the engine chosen there is the choice of three different transmissions. The 116d, 118d and 118i have an upgraded 6-speed manual gearbox  with the 116d and 118i also having the option of a 7-speed Steptronic dual-clutch automatic unit. An improved 8-speed Steptronic Sport auto transmission is fitted as an option to the 118d and as standard in the 120d xDrive and Mi35i xDrive models.

As for trim and specification the core models are available with SE, Sport and the best selling M Sport levels plus the range topping Mi135i xDrive variant. Important to BMW users are wheel sizes it appears. The SE has 16-inch alloys, Sport 17-inch alloys, M Sport and M135i 18-inch and a new 19-inch alloy is optionally available for M Sport spec models.

The 1 Series has always been an important first step on the company car ladder so for those users, and of course well-healed retail buyers, specification and body styling tweaks are important one-upmanship considerations. The SE comes with matt black air guide grilles on the front bumper, while Sport adds exclusive air inlets finished with a high-gloss black, the kidney grille features a chrome frame with high-gloss black struts which I found particularly ugly. It’s huge, brash and looks like an old style grille we used to get with South Korean and Chinese models. 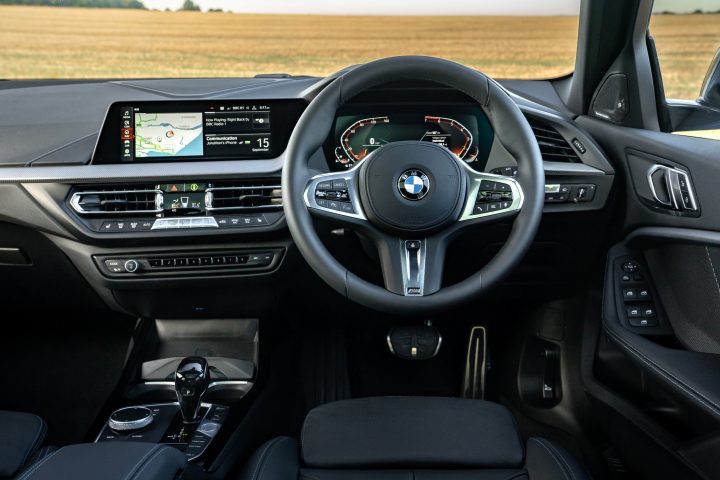 Connectivity functions are new big features for the small Beamer and are comprehensive, available as standard or among many options. Suffice whatever spec level is chosen, it is impressive and ranges from the usual safety functions through to sat-nav operation, driving support and the usual BMW driving and suspension mode selections depending on model.

But the crux of the new BMW 1 Series is its new body design and using a front wheel drive modular platform shared with some MINI versions and other front wheel drive BMW models. The fitting of a transverse engine has allowed benefits for improved interior space without increasing the overall length of the vehicle, which is 5mm shorter.

The front-wheel-drive architecture with transverse engines allows for a lower centre tunnel so this allows rear occupants more space than in the predecessor. Access is easier and there is an extra 33mm of knee-room available. Rear headroom is up by 19mm when the outward opening panoramic sunroof is fitted. 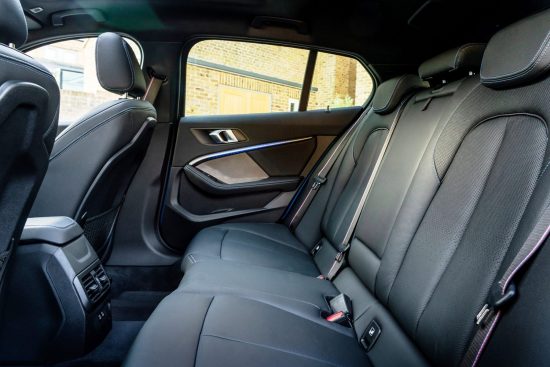 Rear passengers also have 13mm more elbowroom while the driver and front passenger get an extra 42mm in this respect. The luggage compartment capacity rises by 20-litres to 380 litres, 1,200 litres with the rear seat backs folded down. 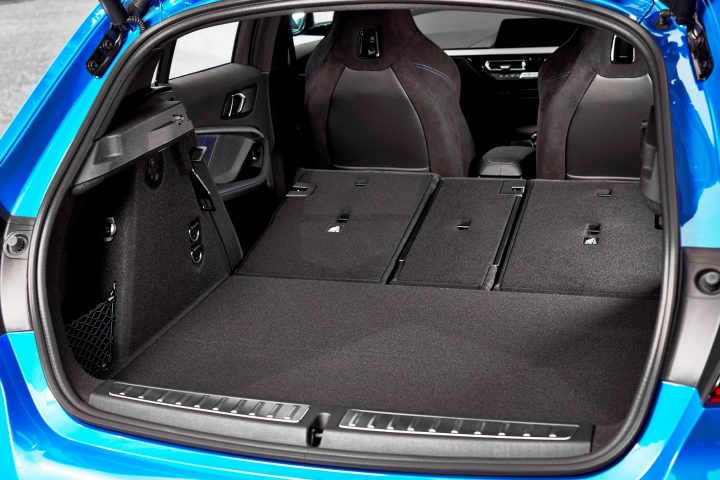 The minimum width of the luggage compartment has also increased by 67mm and an electrically operated tailgate is now optionally available for the first time as this small hatchback goes big car design, spec and some would argue – price! My actual new 1 Series test car was the 118i M Sport spec level with auto transmission priced at £28,290.

But with lots of extra cost options fitted to showcase what is available so the whole package car and options weighed in at a mighty £37,500.   The auto gearbox option costs £1,350, the panoramic sunroof £1,000, Driving Assistant £1,000, Missano Blue metallic paint £560, Comfort Pack including electric front seats heated steering wheel and electronic boot release added another £1,500 cost, the M Sport Plus package with 18-inch wheels, M Sport steering and braking and rear spoiler costs £1,800, the Technology Pack including adaptive LED headlights, auto beam and head-up display costs £1,500 and the Technology Pack including Harman/Kardon surround sound, Connected Pack Professional and BMW Live Cockpit added yet another £1,500 to the test car’s price.

With the transverse engine, front wheel drive, new transverse BMW Group platform and the 1.5-litre, 118i, 3-cylinder turbo petrol engine derived from the MINI range, it’s a package new to BMW but one we still know well from MINI. The engine with 140hp from 4,600rpm and 220Nm of torque from 1,480rpm likes to be revved. But that isn’t to say it’s not smooth and flexible at lower stop-start or commuting speeds thanks to its high torque at fairly low rpm speeds. It performed best on the open road with a top speed of 132mph and a zero to 62 acceleration time of 8.5-seconds. It’s not setting any new standards but neither is it a disappointment. As I said we know what we are getting and it serves and suits the 1 Series five door hatchback very well and it’s nicely balanced with the 7-speed auto gearbox completing an easy to live with package. 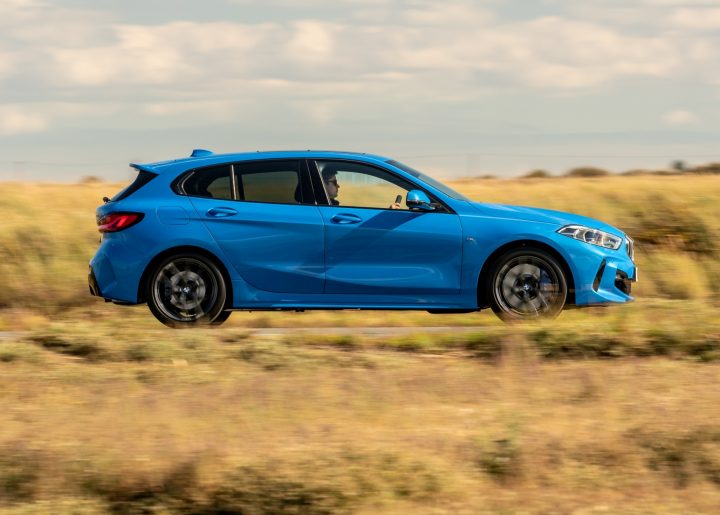 Front end grip is sure-footed during high speed cornering with minimal understeer and the steering response is needle sharp thanks to the M Sport settings.

The ride is on the firm side, not helped by the larger 18-inch wheels or lower M Sport suspension settings.

Thankfully, the Comfort suspension setting smoothed out the ride quality although it did loosen up the handling slightly. Is the new 1 Series worse off by having driven front wheels? Not at all, indeed BMW say most of their owners didn’t even realise the previous model was rear wheel drive.

The arrival of the new 1 Series now sees various tax changes coming into force if it’s bought in April onwards this year.  Currently under the existing NEDC emissions test procedure the CO2 emissions range between 114 and 123g/km meaning VED First Year road tax costs £170 followed by the £145 Standard rate. But from April under the new WLTP CO2 measuring system these go up to 139 to 151g/km and as we have a UK Government Budget due this month VED charges are expected to increase but as yet we don’t know by how much. If they stay the same it would be £210/£145. For the company car driver the current CO2 based Benefit-in-Kind tax with this engine and spec is 28%. Using the new WLTP figures we already know the new BiK figures so these increase to between 32 and 35%.

However it’s not as confusing with mpg figures as under the new WLTP system these are for the 118i versions 40.4 to 47.1mpg depending on spec, wheel size and the driving cycle and the model I’ve been testing shows a figure of 43mpg. My week of driving returned an overall figure of 40.2mpg.

The significant structural design changes to the third generation 1 Series 5-door hatchback should not deter customers, company car users or retail buyers, from stepping onto the bottom rung of the extensive ladder of BMW’s vast array of models. 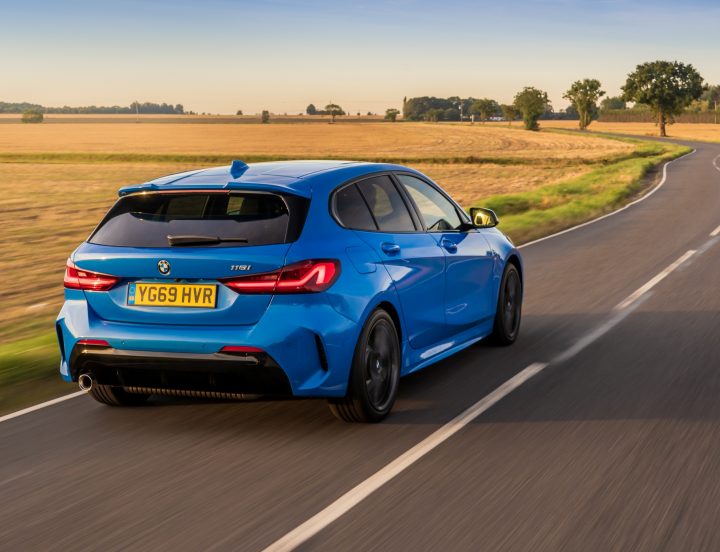 The slight extra rear seat legroom will appeal although it’s not a huge change but the biggest appeal is the addition, either as standard or from the vast array of options, of the new driving support, safety and connectivity functions carried down from the brand’s larger and more expensive ranges. The build quality is as high as ever as is the driving appeal even though its moved to front wheel drive.

Against: Smallish hatchback with a big price if options are added, some options should be standard, firm ride with the M Sport suspension and larger wheels, significant tax increases from  April onwards due to the new WLTP mpg and CO2 measuring system, very ugly new large front grille design.