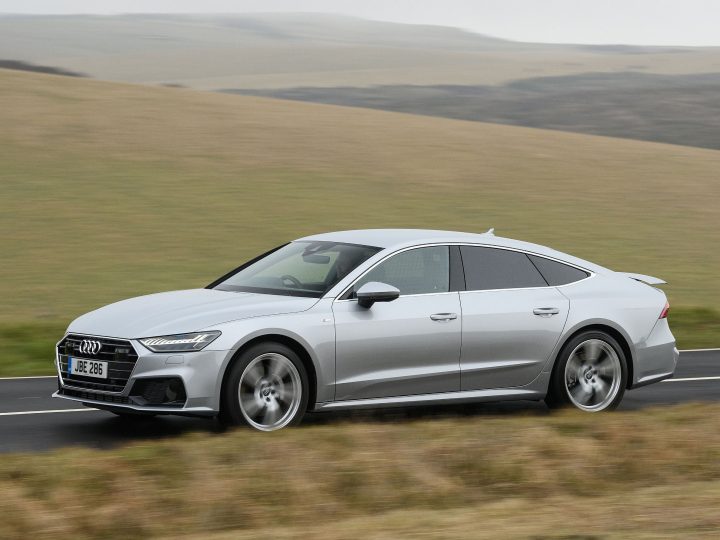 The newcomer is likely to appeal to customers who want all the latest high-tech features but don’t fancy driving, or being driven in an Audi A6 or A8 saloon.

These are models more suited to chauffeuring business execs than providing a more involving high performance driving experience desired by the affluent owner who wants to drive rather than be driven. The A7 Sportback fits that ‘want’.

Launched in the spring of this year, initially with two engine choices, the 55 TFSI 3.0-litre V6 petrol with 340hp or the better selling 50 TDI 3.0-litre V6 286hp turbodiesel engine options, Audi UK have just added a 45 TDI 3.0 V6 231hp engine to the line-up.   All versions have as standard a 48-volt mild-hybrid system which reduces fuel consumption and lowers emissions mated with an eight-speed tiptronic automatic gearbox and quattro all-wheel drive system. 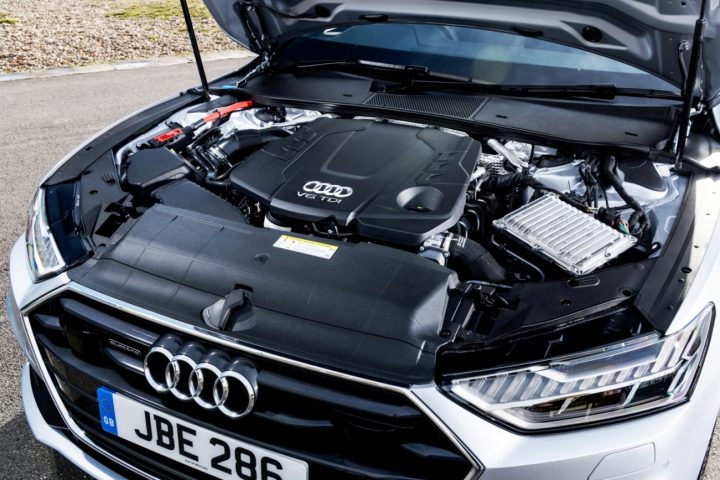 Even though equipped as standard with the latest semi-autonomous driving elements, the advanced connectivity and driving support functions and most spec most users would expect to find as always there is a comprehensive choice of extra cost options which could tempt  buyers to significantly increase  these prices if they get carried away enhancing their model of choice.

Talking of choice, even for a niche model range more engines and trim levels will join the line-up including four-cylinder engine units, a plug-in hybrid and higher performance S and RS variants.

The first A7 Sportback was launched in 2010 and followed the A5 Coupe. The latest generation with its five door coupe body style sits between the A6 and A8 saloons and uses an evolution of Audi’s MLB Evo platform shared with the new A8.  With its longer wheelbase it’s now a grand-tourer rather than an out-and-out sports coupe. Its main rivals of course are German brand models – the Mercedes CLS and the BMW 6 Series Gran Coupe.

Although not as practical as the A6/A8 saloons in terms of people-carrying the A7 more than makes up for that with its 4,969mm long coupe styled body giving it a svelte long and low athletic look with wide stance, it looks firmly planted on the road. 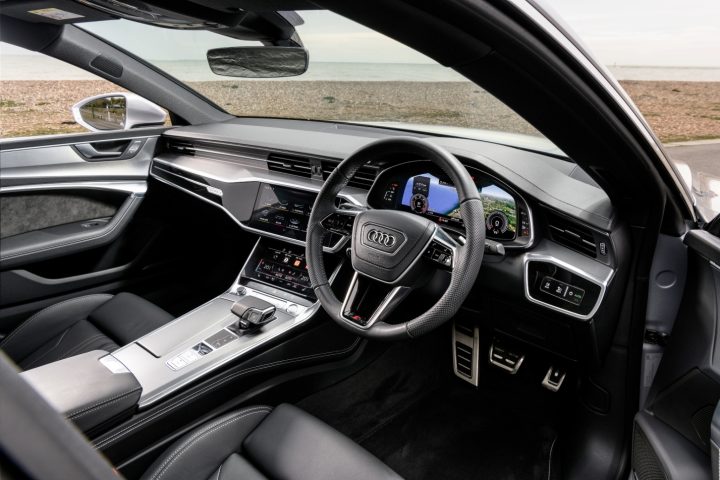 It’s more agile than the heavyweight A8 saloon so will appeal to affluent owners who enjoy driving.  Passengers are not short-changed eitherwith more than ample space up-front both in terms of legroom, headroom and width with the overall cabin length increased by 21mm and the wheelbase by 10mm. 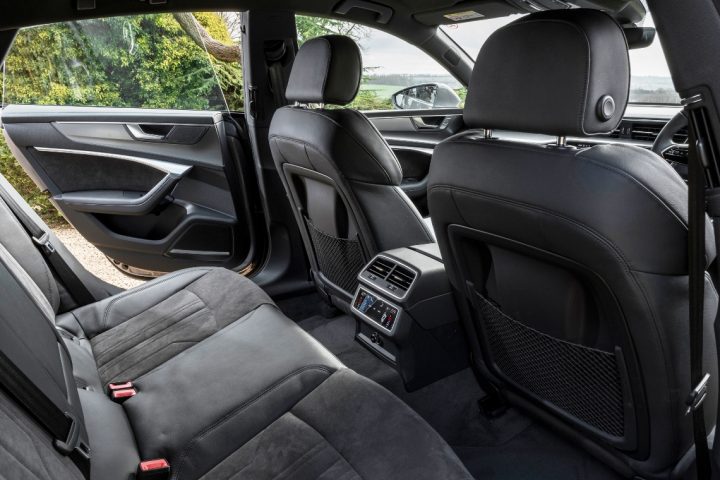 It doesn’t sound much but it translates into a less claustrophobic interior. The rear seat headroom is not as ample as the front but at six feet in height my head was still not touching the roof. Rear seats divided 40-20-40 so there is ample width for two adults in contoured seats with a smaller firmer central position for a child. 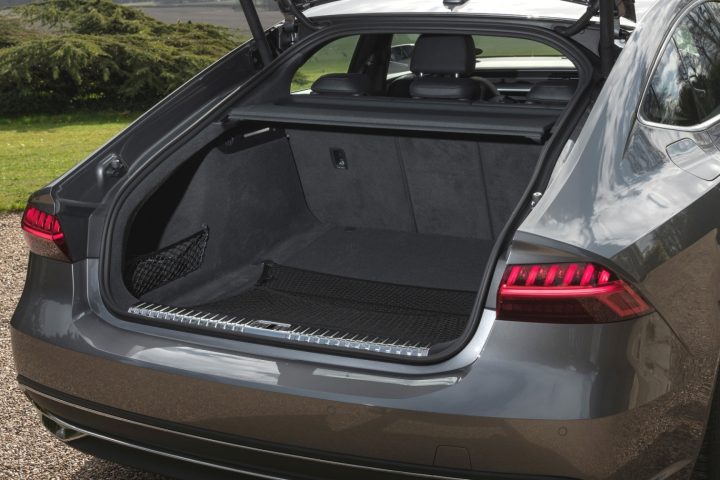 At the rear is a well-shaped boot offering 535-litres carrying capacity and the tailgate lifts high for easy access.  The rear seat backs can be folded down to increase capacity to 1,390-litres.Visibility is generally good but there are blind-spots at the rear corners.

The steep angle of the tailgate window restricts the rear visibility but that is offset by the front and rear view camera and that extends to providing side-vision during parking as well.

Outside the new A7 Sportback continues the latest Audi styling theme of a wide low front, prominent Audi grille, chiselled and sculpture styling lines leading from the bonnet, along the front wings and side neatly flowing to the wide rear haunches and continuing across the rear end. The coupe side profile with frameless side windows completes the premium design.

Inside is the latest incarnation of Audi’s Virtual Cockpit and it mirrors the design of the new A8 saloon which can be customised for their display formats with umpteen choices of mood lighting themes. In the centre of the console is a dual screen infotainment system.

The upper 10.1-inch screen has the usual sat-nav, radio, smartphone connectivity and other functions which can be a bit complex to fathom out initially and sometimes slow to react whilst the lower 8.6-inch unit controls the heating and ventilation functions but when the system is switched off the screen is left marked with greasy fingermarks. 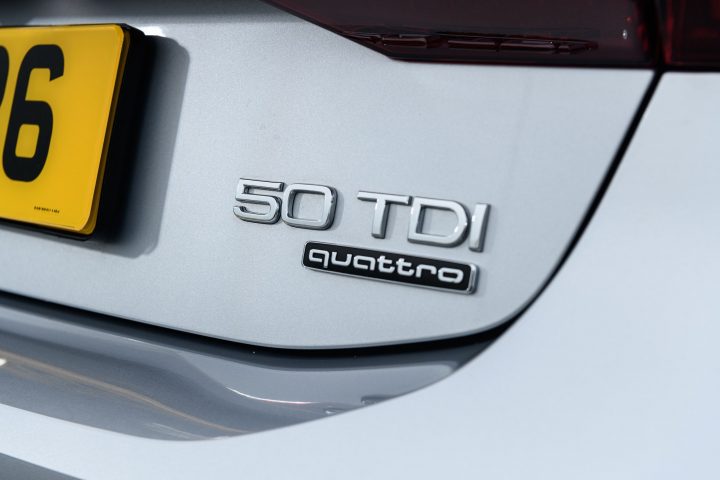 For no logical reason I can find the figure 50 prefixes the 3.0-litre V6 turbodiesel engine.  This unit produces 286hp and a massive 620Nm of torque from 2,250rpm. Drive is through an eight-speed tiptronic auto gearbox with Manual and Sport modes through to the usual Audi quattro all wheel drive system.

All engines for the A7, like the A8, now use a mild-hybrid 48-volt system to improve fuel economy and reduce emission. And it also refines and speeds up the intelligent stop-start system. The mild-hybrid system allows seamless coasting for long periods on the overrun between 34 and 99mph and the energy through this function and regenerative braking is stored in a battery pack for use to boost engine performance when needed.

The intelligent start-stop operates from 13mph in traffic and uses a camera to start it again once it has detected the traffic in front has started to move onwards again. All very clever and very useable in today’s congested traffic conditions.

As for performance the TDI turbodiesel engine is relatively hushed, no clatter on start-up and exceptional refined under acceleration. During my week of test driving the overall figure was 38.4mpg  but during a longer run using a motorway and A roads the journey returned an impressive 43.2mpg which given the size, the power and the performance of this vehicle was very acceptable. 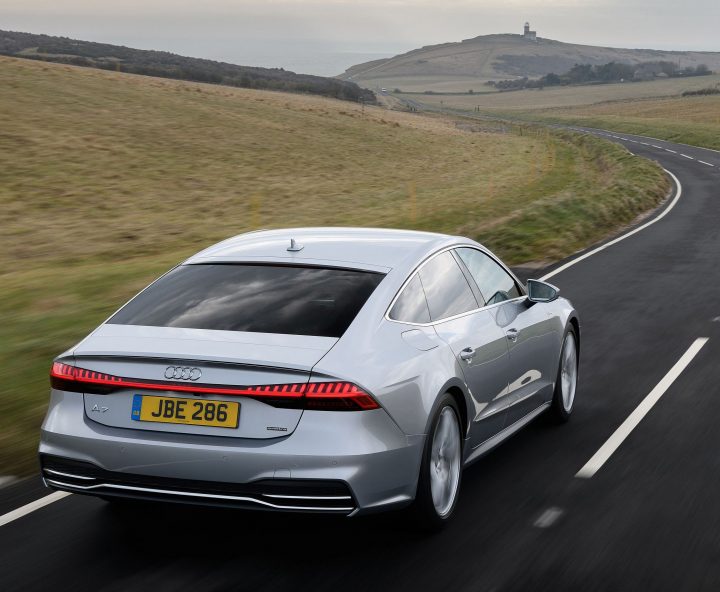 The Audi A7 Sportback is a high class comfortable and stylish high-speed grand-toured that eats up long distant mileages with ease.

It competes in a very niche sector of the new car market so there is the scarcity value to be added into the ownership proposition and that element is a desirable one.

Against:  A cruiser more than a sharp handling sports coupe, some extra cost options should be standard fit so it can become expensive to buy/lease, fiddly infotainment system and messy heating/ventilation touchscreen, some hidden dials masked by the steering wheel rim, restricted rear/rear-quarter visibility, ungenerous warranty.