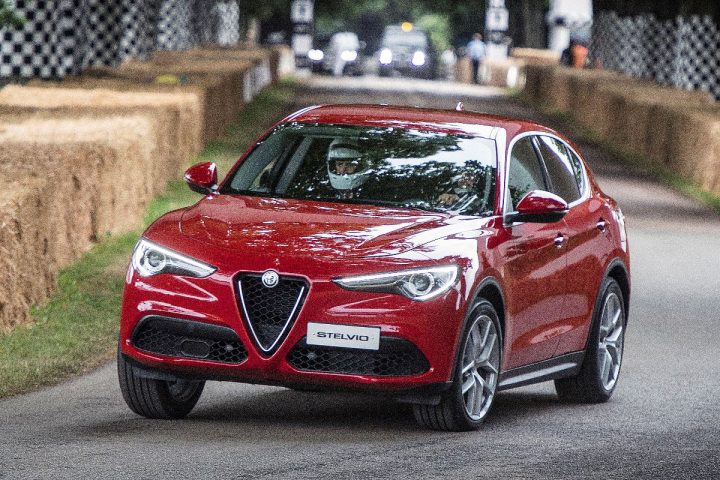 The Alfa Romeo Stelvio can be bought with your head or your heart, says David Miles.

Such is the public’s obsession with SUV/Crossover vehicles that even  Aston Martin, Porsche, Bentley, Lamborghini, Maserati, Ferrari and luxury car producer Rolls Royce feel-the-need to enter this market sector.

They join the already established premium brands of Audi, BMW, Jaguar, Range Rover, Mercedes-Benz and Lexus and most recently Alfa Romeo who launched their Stelvio Crossover, their first production SUV in over 100-years. It is named after Italy’s most famous mountain pass.

The Stelvio is a five door, five seater Crossover with an aerodynamic coupe roofline over a muscular body. The vehicle   has huge and distinctive road presence fronted by the iconic Alfa Romeo grille with its traditional offset numberplate. At the rear is a steeply raked tailgate with exhaust tailpipes incorporated at each side of the chunky rear bumper.

Alfa models have not always been known for their quality of reliability and fit and finish and I noticed the fuel filler flap of my test car didn’t fit flush into the bodywork with its trailing edge sitting proud of the rear quarter panel. The electrically operated tailgate gives easy access to a 525-litres boot, about average in its class. There are split folding rear seats to increase this space but no official figure is given by Alfa. I suggest when the seat backs are folded the load space will go up by around another 1,000-litres. 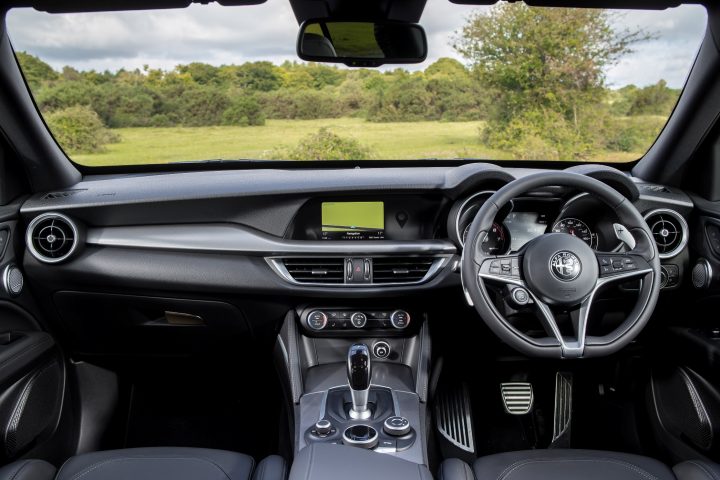 The interior design continues the sports theme highlighted by the deep cowled dials and it’s very much geared towards being a driver’s cars although passengers are well catered for.   The huge gear shift levers fitted to the steering wheel highlight what I mean by being a driver-focussed design.

Unfortunately they mask the conventional two control stalks for the indicators and wipers and you need to learn their use by instinct rather than by sight.   Between the front seats there are other controls including Alfa’s DNA driving mode selector that allows Dynamic, Normal and Automatic Eco efficiency driving characteristics. 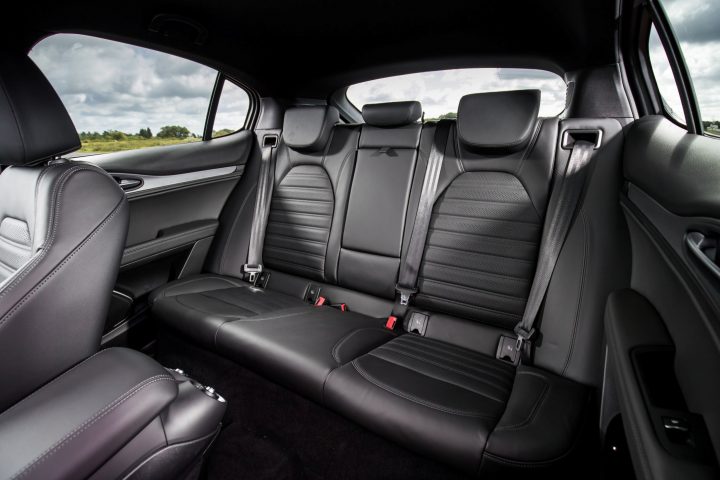 The Stelvio will accommodate two adult passengers and three children with ease or four adults. Taller rear seat passengers might find the headroom tight because of the coupe roofline. Visibility isn’t great all-round the car due to thick pillars and to the rear because of the steep angle of the tailgate window but the rear parking camera on my test car helped with reversing.

Overall the interior design is interesting and seemingly well put together with good quality textured and dimpled finishes to the soft touch trim, the textured carbon-fibre trim inserts and the leather upholstery look and feel high quality. The sports front seats are electrically adjustable but I found them a bit on the tight side for width between the side bolsters and I’m not that fat, not lean, but not that big.

Where the Stelvio scores highly against most of its rivals such as the Jaguar F-Pace, Mercedes GLC, BMW X3 and Porsche Macan is its fun-to-drive attitude. That is not something that can be said for many SUVs which are mostly efficient and capable but not necessarily fun. With its 50/50 weight distribution, lightweight construction with use of aluminium for parts of the body and suspension and a carbon-fibre drive shaft between the front and rear axles the Stelvio feels well balanced and the Q4 all-wheel-drive traction adds that extra grip although it doesn’t operate all the time.

Mostly it operates on-road in rear wheel drive and only when extra grip is needed does it transfer up to 50% of its traction to the front wheels. There is no function to lock it into permanent four wheel or two wheel drive so although classed as an SUV/Crossover it isn’t for anything more than off road travel over gravel tracks or a flat and dry field of grass, but it does have hill descent control should the driver feel adventurous.

The steering is very fast acting and so its responds well changing direction with ease and preciseness. It performed best for me on fast sweeping open country roads.   Around town it was easy enough to drive although visibility isn’t great and on motorways it cruised happily enough but not with any special level of enjoyment. 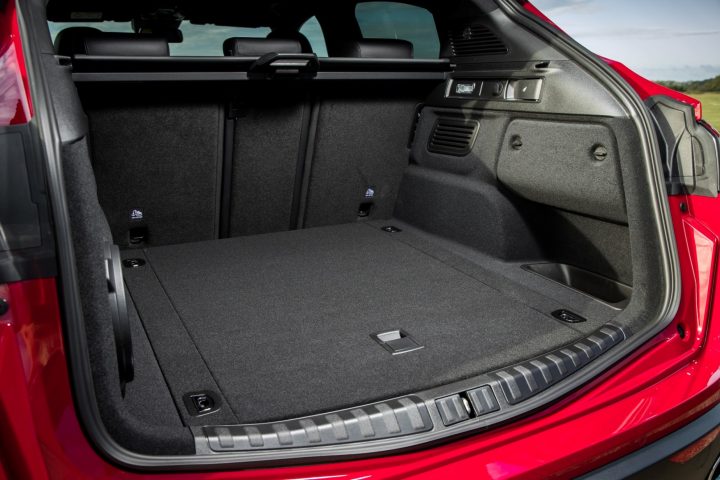 The downside was the ride comfort. The firm suspension settings enhanced the road holding capabilities but in combination with the 20-inch wheels and low profile tyres fitted to my top spec model, the ride was on the hard side and not compliant. It fidgeted over poorer road surfaces, felt generally unsettled and the impacts from potholes were amplified into the cabin.

But back to better news in the form of the 2.0-litre, 280hp four cylinder turbo petrol engine. It’s likely that more customers, despite the insecurities of the future of diesel, will chose the 2.2-litre turbodiesel units, but being a driver’s car with a sporting pedigree I think the turbo petrol engine will provide more driving enjoyment.

With a huge 400Nm of torque for a petrol engine available at 2,250rpm this unit is very responsive even in its ‘eco’ setting. Generally the engine felt strong and progressive through a wide powerband no doubt helped by the slick changing eight-speed automatic gearbox.

Not so pleasing though are the CO2 emissions of 161g/km which pushes up tax costs. The VED road tax is £500 First Year rate and then £140 Standard rate but as this particular Stelvio costs more than £40k there is the £310 supplement to add to the Standard rate for five years. That all important company car Benefit-in-Kind tax rate is 31%. Insurance is group 36D. 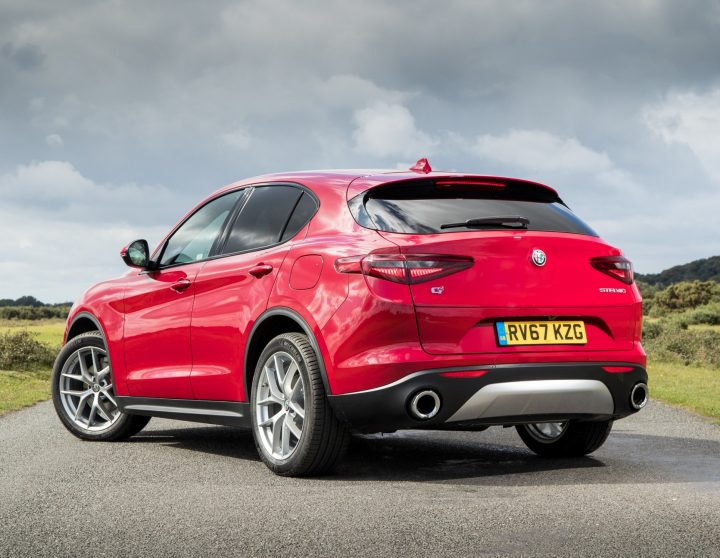 The amount of customers moving rightly or wrongly to SUV/Crossover style of vehicles is unprecedented in the history of motoring and it’s taken Alfa Romeo a while to enter the fray. But now it has, it couldn’t afford not to, and they have come up with the Stelvio which can be bought either as a ‘head’ or ‘heart’ decision, it’s that sort of brand and that sort of model.