You are here: Home / Featured / Sara’s star is shining 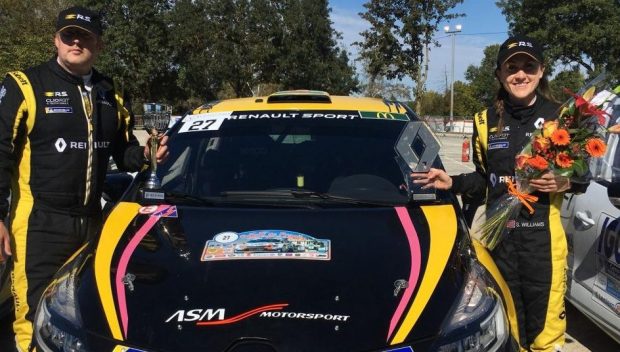 They finished fourth in the Clio R3T battle, sixteenth overall and Sara took the honour of First Female Driver, quite a distinction, as French Rally forums were listing her post rally as having the best result for a female driver since the mid 1990’s, so another distinction for the young Welsh star, to add to her recognition as The British Women Racing Drivers’ Club Gold Star Elite winner of 2018, and winner of the Louise Aitken-Walker BWRDC Trophy.

Now a UK Representative to the FIA Women in Motorsport Commission and supported in her rallying by Brecon Motors and Brecon Car Rentals, plus Burnsides and Renault Sport France, Sara will surely achieve a great deal more behind the wheel and in motorsport generally.

Support from Renault Sport France will also enable Sara to arrange ‘hospitality’ at any of the Championship events. Her plans for the 2019 season are well underway, work ongoing to secure the budget for a further competitive year in the Trophy Cup . The final round of this years Renault Clio R3T France 2018 Trophy Cup series will be the Rallye Du Var on the 23 to 25 November, in the Provence Alpes overlooking Saint Tropez.