You are here: Home / Motorsport / 2021 / Preview to postponed Rallynuts Stages this weekend

Garry Pearson and Callum Black will go head-to-head in the battle for the Motorsport UK Pirelli Welsh National Rally Championship title as the 2021 series reaches an exciting climax on the Rallynuts Stages Rally on Saturday.

Having scored maximum points on the previous two rounds, the Eventsigns Woodpecker Rally and Visit Conwy Cambrian Rally, Garry (below) takes a six-point lead into the final round postponed from April.

With a score to drop towards the final points tally, if Garry and co-driver Niall Burns win again it will give the Asset Alliance Škoda Fabia R5 crew a perfect three maximum score result and their first Welsh title.

If Callum wins and Garry finishes second, they would be tied on points – with Garry winning the tiebreak.

Whilst Callum is currently third in the overall drivers’ standings, the 2017 Pirelli Welsh champion could win the title again – but he must finish first or second.

Co-driven by Jack Morton, Callum (below) was the early leader of the Pirelli Welsh Rally Championship after taking victory on the opening Nicky Grist Stages. He kept his title hopes alive with a second-place finish in his Pallas Connections-backed Ford Fiesta R5 on the Visit Conwy Cambrian Rally, but his retirement on the Woodpecker could come back to haunt him, especially in a tiebreak situation. 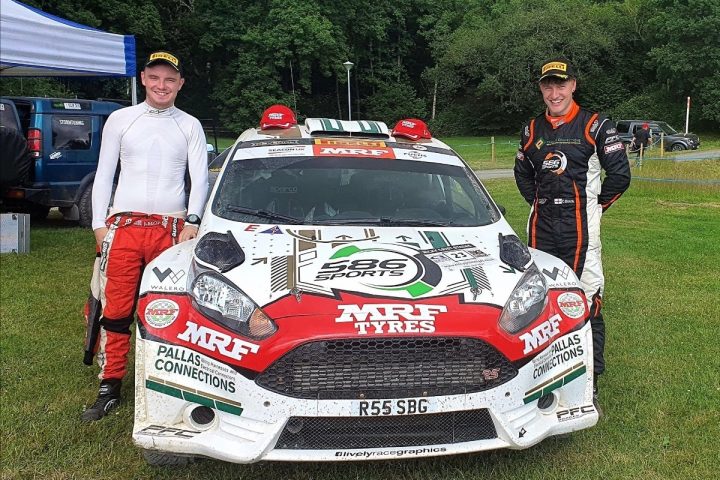 Neither driver has rallied in Myherin, Sweet Lamb and Hafren forests for several years. Callum was last there on the 2017 Wales Rally GB, while Garry hasn’t seen them since the 2014 WRGB.

George Lepley arrives at the Rallynuts Stages lying second in the overall drivers’ standings. But with a second and two thirds the WD-40 Mitsubishi Evo X driver can only add five points to his current total (when taking the lowest score to drop into account) and is therefore unable to win the overall title. Together with Tom Woodburn, George is more than capable of winning the event, especially as the fast and flowing mid-Wales stages will suit his car, and he has already claimed the Pirelli Welsh Junior title and the magnificent prize of a test in a PCRS Rallysport-prepared Hyundai i20 R5, courtesy of OnThePaceNote.co.uk.

Work commitments prevented Ian Bainbridge from contested the last round, but he and co-driver Will Atkins are looking forward to returning to the Welsh forests in their Gypsum Group Škoda Fabia R5. The 2018 Rallynuts Stages was Ian’s first forest rally, where he was seeded at number 90 in a Subaru Impreza. His rapid rise through the rallying ranks, particularly since he acquired the Fabia, means that another good result could secure him the Pirelli Welsh runners-up spot.

It’s certainly not been the season Matthew Hirst (Delta Salvage Mitsubishi Evo IX) and Russ Thompson (Dunnow Plant Mitsubishi Evo IX) had been hoping for, so the respective 2019 Pirelli Welsh driver champion and runner-up will be aiming to end 2021 on a high. Matthew has been co-driven by Declan Dear all season, while Russ will have Tom Murphy alongside him this time, his third co-driver of the season.

The 2018 Pirelli Welsh driver champion Dylan Davies hit a rock and lost a wheel on the Cambrian Rally and, together with Mark Glennerster on the route notes, will be hoping for better luck this time in his Subaru Impreza.

David Tomlin, who retired his Axon Ford Fiesta R5 with clutch problems on the Cambrian, will be co-driven by Ian Beamond as his regular navigator Keith Ashley is otherwise engaged as Rallynuts Stages Clerk of the Course and Chief Safety Officer.

There is a good battle for the RAVENOL UK Welsh Challenge, with several drivers still in contention for the title.

Maxx Bradshaw/Liam Whiteley have travelled from the Isle of Man for every round of this year’s Pirelli Welsh Rally Championship and after finishing fourth in the Challenge category on the Cambrian the Manx men will be hoping to end the season with a podium finish in their Renvo8/DB Autos & Sons Mitsubishi Evo III.

There is also a close fight for the Restruct-sponsored Two-Wheel Drive title.

Owen McMackin leads that category as well, with Ashley Davies and David Crossen also able to win. In fact, the latter could win the title with a perfect score of 90 points, having won the class on the Nicky Grist and the Woodpecker.

Having given his immaculate Wales Motorsport-built Restruct Escort Mk2 its debut on the Woodpecker, Two-Wheel Drive class sponsor Ron Morgan will contest the Rallynuts with Marc Clatworthy once again in the co-driver’s seat.

Retirement on the Cambrian Rally means that Ioan Lloyd is unable to win the Two-Wheel Drive title, although the fact that he’s been challenging for that trophy in his West Wales Rally Spares Peugeot 208 R2 highlights what a talented youngster he is. Co-driven by Sion Williams, the teenager’s priority was always the class W3 title, although he is in a race against time to repair his car after hitting a rocky outcrop and breaking a strut last time out.

Paul Street/Ian Jones lead the highly competitive Pirelli Welsh Historic Cup after a win, a second and a fourth-place finish in their Escort RS1800 Mk2. They can only be beaten to the title by Paul Barrett (Escort Mk2).

Ben Friend/Cliff Simmons finished second in class on the Woodpecker and will be looking to end the season with a Pirelli Welsh Historic Cup win in their Allglass Escort Mk2, although winning the title is beyond them.